The reporting on our 1991/92 season is proving to be an enjoyable experience for many, judging by the comments received on the message board, and certainly things had started to go a lot better by this stage in the season.

No season is ever going to be perfect and this one was no exception with the sad loss of people very much attached to Burnley Football Club in one way or another, and such a sad loss occurred on Saturday 26th October 1991. 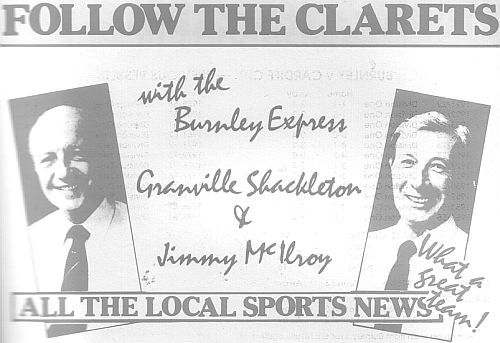 As we prepared to leave for our game at Lincoln, the news came through that Granville Shackleton, former sports editor of the Burnley Express, and previously with the Lancashire Evening Telegraph and Burnley Star, had passed away at the age of just 64.

I’d known Granville for some years, and considered him a friend. We travelled to many an away game together on the same coach and he was great company. He’d been with the Telegraph, reporting on the Clarets, during the 1960s and early 70s, following his own dad Bert Shackleton, and then joined the Burnley Express, eventually taking over as Sports Editor from Peter Higgs at the beginning of 1984. He held that role until he was forced, through illness, to retire in early 1991.

If someone asked me to describe him, I would say he was a gentleman and also very much a gentle man (and you will see those words repeated below). He was also a very genuine man who was so easy to like. I, personally, have always had a very good relationship with the Burnley Express and the sports staff, and that’s still the case now with Chris Boden and Dan Black. It’s something I really appreciate and am always thankful for. I know that, had I been running a website then, it would have been just the same in Granville’s era. I know he would have gone out of his way to help, that’s just the man he was.

My favourite story of Granville, however, was away from football. He was once caught, along with a number of others, drinking after time in a local hostelry. The editor of the Burnley Express assured him that his name would be kept out of the newspaper. Granville was having none of it and insisted that he should be named alongside the others. In truth, I think he was quite proud of it rather than wanting to hide it.

On his death, tributes poured in from fellow journalists, from Burnley FC, from local cricket clubs, from the Supporters’ Club but perhaps the most poignant came from his deputy at the Burnley Express, Jimmy McIlroy.

Jimmy said of his friend: “After sitting opposite him at the Express sports desk for the past eight years, following almost a decade when we both churned out sports news for the Lancashire Evening Telegraph, and before than an association that goes back to the great days of the Clarets, I feel it is the end of an era and I feel a great loss.

“One of the mildest men it has been my privilege to know; but meakness wasn’t weakness, because he could be as hard hitting and as critical as the situation warranted, as any Burnley FC manager going back to the days when Harry Potts was in charge, could confirm.

“Without going all sentimental, I will miss this gentle man. All the years I’ve been in his company I’ve never known him raise his voice. Coming late into journalism, he taught me a lot and unbelievably we never had a cross word, though goodness knows, he often had cause to hit the roof at my inexperience.”