During his one year as manager, Joe Brown made a significant change to his backroom staff. Chief scout Dave Blakey had joined the long list of departures in 1976 and Joe replaced him by bringing Harry Potts back to the club in that role. It was Potts who was asked to become manager on Brown’s departure.

After some 12 years as manager, followed by another two and a half years as general manager, Harry had left the club in the summer of 1972 but he was back in football within six months, taking over from Bob Stokoe at Blackpool. By coincidence, his first game in charge of the Seasiders was against Burnley on Boxing Day 1972, a game we won 2-1, and in January 1976 he was successful in an FA Cup tie against the Clarets, a game which saw the end of Jimmy Adamson’s reign as manager. 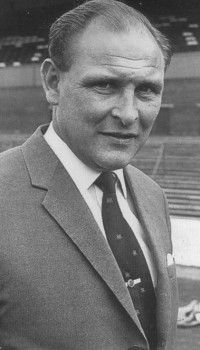 He left Bloomfield Road that summer, to be replaced by former Scotland international Allan Brown, and returned to Burnley to work alongside Brown. He’d previously left the club after losing a perceived battle with Adamson but his return to Turf Moor very much met with the approval of most people with an interest in the club although we were in trouble in Division Two that season and by the time he took over from Joe we were next to bottom in the league with fifteen games to go.

We reached safety but things didn’t get better in the 1977/78 season, in fact for a time they got worse, and only an amazing run at the end of that season kept us up. Although he’d been able to bring in Brian Hall and Steve Kindon during that season, Harry was still having to sell players. By then both Brian Flynn and Ray Hankin had moved to Leeds but we had a better 1978/79 season that saw us lift another trophy, this time the Anglo Scottish Cup.

My one memory of that Anglo Scottish Cup season was Harry coming onto the pitch, along with Celtic manager Billy McNeill, trying to calm things down and helping youngsters and older supporters back over the wall after the players had been taken off the field by referee Pat Partridge for their own safety as the visiting fans rioted. That win against Celtic led to a semi-final against Mansfield and we eventually faced Oldham in the final. Looking back it was very fitting that his last full season in charge of Burnley Football Club saw us win a trophy.

Kindon wasn’t the only former player to return; Leighton James signed early in that 1978/79 season, and Martin Dobson in the summer at the end of that season, although more sales followed as the financial problems mounted, with Tony Morley and Terry Cochrane going to Aston Villa and Middlesbrough respectively. Morley, along with Hall, had scored in the Easter win at Blackburn in April 1979 but we’d failed to win another game when a 2-0 home defeat to Cardiff in October of that year took us to the bottom of the league in what was Burnley’s longest ever run without a win. It brought to an end Harry’s association with Burnley Football Club.

There was a real sadness to it. Harry’s Burnley career should never have ended like this and with us in such a poor position. He would not be involved in league football again although he did act as Chief Scout for Colne Dynamoes for a time.

He continued to live locally before passing away after a long illness in January 1996. On the day of the funeral, Brunshaw Road was lined by fans, players, directors and many former players as the cortege stopped to allow him to be at Turf Moor one final time. Just over five years later that very road outside Turf Moor was so appropriately renamed ‘Harry Potts Way’ in recognition of his wonderful achievements for our club.

Although this second spell in charge didn’t work out as well as any of us hoped, Harry can be counted among one of Burnley’s greatest ever managers.