Hatters are here to kick off new Turf Moor season 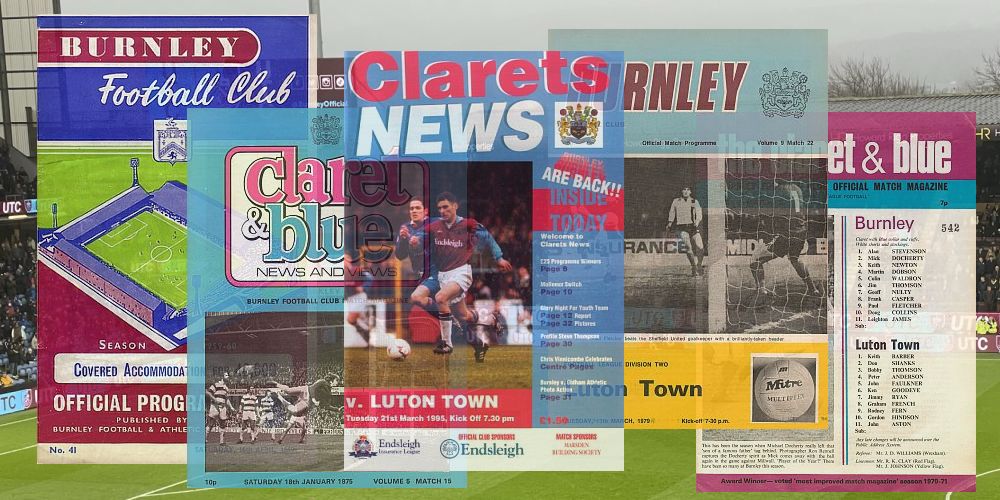 Last time Turf Moor opened its doors for a Championship game, a Sam Vokes goal gave us a 1-0 win against Queens Park Rangers and, more significantly, promotion to the Premier League for a third time. Now we are back in the Championship with Luton Town our first visitors this season.

Perhaps Luton are not the best opponents given their most recent record at the Turf. Although our record at Kenilworth Road is reasonably good, their last six visits to Burnley have given them three draws and three wins against us. Our last home win against them came at this level in March 1995 when we came from behind to beat them 2-1 with goals from John Mullin and Gerry Harrison.

Since we last played them in March 2007, a game recalled at the end of this preview, we have very definitely gone our separate ways until coming together in the same division again this season. Luton went down at the end of that 2006/07 season and suffered relegation in the next two seasons too. As we prepared to play the likes of Manchester United and Everton at home in the opening week of the Premier League season, Luton, who we had played in a league game just over two years earlier, were lining up against Gateshead and Kettering.

But we are back in the same league for the first time since 2007 and we go into tomorrow’s game buoyed by last Friday night’s opener against Huddersfield. I think it was a performance that took most of by surprise, particularly in an outstanding first half when the only possible criticism could have been the fact that we only led by one goal, an Ian Maatsen goal that proved to be the winner.

It’s just one game though and it has to be noted that one win doesn’t mean winning promotion any more than a defeat means we won’t. We’ve won promotion to the top flight of English football on seven occasions but only in the first two did we win our first game. Of the four promotion seasons I’ve seen, we’ve kicked off with three draws and one defeat, that horrible day at Hillsborough in 2008.

Having said that, we must go into tomorrow’s game with confidence on the back of that display at Huddersfield and in front of what’s going to be a big Turf Moor crowd, one as big as we’ve seen at this level for the opening home game in some considerable time.

One player who will definitely take some confidence onto the pitch is midfielder Josh Cullen who had a debut to remember at the John Smith’s Stadium, winning our man of the match although goalscorer Ian Maatsen did run him close.

Cullen, who is now looking forward to playing on the Turf for the first time, said: We enjoyed the result and the performance (at Huddersfield) but we’ve put that behind us now. We got back to work on Monday and we’ve prepared for Luton on Saturday. Full focus is now on taking nothing for granted after Friday’s performance.”

Embed from Getty Images
Regarding his first appearance at home, he added: “I’m really looking forward to it. We were backed brilliantly by the fans at Huddersfield, so it’ll be great to get our there and experience playing at the stadium for the first time in front of our fans. Hopefully, we can send them home with a similar result to last week.”

A week ago, it was proving virtually impossible to predict our starting line-up. I think most of us came close but I’m not sure many, if any, would have thought Charlie Taylor might play in the centre of defence or that Dara Costelloe would be called in. Both happened and both played well, but we don’t know Vincent Kompany well enough yet to know whether he will say same again having played so well or whether he’ll change things.

He does have one extra option, of course, with yesterday’s signing of Manuel Benson. I could suggest he’s unlikely to be considered having just signed but a week earlier we saw Vitinho on the bench having just completed his move to Turf Moor.

With Kevin Long, Jóhann Berg Guðmundsson and Jay Rodriguez unlikely to be considered, and with Matt Lowton serving the final game of his suspension, it is likely to be the same players plus Benson who will be involved. If there are no changes then the team will be: Arijanet Muric, Connor Roberts, Taylor Harwood-Bellis, Charlie Taylor, Ian Maatsen, Jack Cork, Josh Cullen, Josh Brownhill, Samuel Bastien, Dara Costelloe, Ashley Barnes. Subs from: Bailey Peacock-Farrell, Vitinho, CJ Egan-Riley, Luke McNally, Owen Dodgson, Adam Phillips, Manuel Benson, Scott Twine.

What a different path Luton have been on. The three successive relegations in 2007, 2008 and 2009 astonishingly saw them playing non-league football. They’d gone through a period of administration too and they were to play in non-league football for five seasons, failing in the play-offs in the first three of them before winning the league with 101 points in the 2013/14 season during which their key striker Andre Gray scored thirty goals in 44 league games.

Further promotions in 2018 and 2019 has seen them back in the Championship for the last three seasons in which they have finished 20th, 12th and 6th. In the third of those seasons, they comfortably reached the play-offs but went out in the semi-finals against Huddersfield who themselves were beaten by Nottingham Forest in the final.

Embed from Getty Images
They are expected to enjoy another good season and will very definitely provide us with a very tough test tomorrow. Manager Nathan Jones, the only league manager ever to be named after a Supremes song, has been almost as busy as Kompany in the transfer market. He’s made nine signings since last season ended with goalkeeper Ethan Horvath (on a season long loan from Nottingham Forest), Luke Freeman (from Sheffield United) and Carlton Morris (Barnsley, pictured above)) all making debuts from the start last week and Cauley Woodrow (also from Barnsley) coming on as a substitute.

Those debuts came against Birmingham who they kicked off their season against last Saturday in what was a 0-0 home draw, and that was something of a result given that Birmingham won the corresponding fixture 5-0 last season. Alfie Doughty, another of the new signings (from Stoke), Luke Berry and Reece Burke were all ruled out of that game but all three are fit and two of them are expected to be in the Luton squad tomorrow. Pelly-Ruddock Mpanzu is a more long-term absentee and he won’t be involved tomorrow.

This one doesn’t need to have much written about it. It was the last day of March in 2007. Having made a good start to the season and looking like promotion candidates, injuries to Andy Gray and Steve Jones, two players in top form, both suffered injuries and it is fair to say that the wheels came off.

When Luton arrived at Burnley, we’d not won any one of our previous seventeen league games. We’d slumped from second in the table to nineteenth and suddenly there was talk about relegation. This game was number eighteen without victory but mercifully it ended three days later with a thumping 4-0 win against Plymouth.

Looking back at my report from this game, I wrote: “In a ninety minutes that never made any attempt to suggest it was going to be worth watching, it ended with no surprise, without either side scoring a goal and, to be frank, without either side ever threatening to score a goal.”

Some of the previous seventeen games I thought we’d been unfortunate, others were downright bad with the 1-0 home defeat against Stoke probably challenging this game for being the worst.

Both Graham Coughlan and Paul McVeigh, brought in on loan that week, made debuts but it was another desperate day that left us looking over our shoulders. We remained five points clear of bottom place Luton but now only three points in front of Southend and Leeds although with two games in hand.

Thankfully, things improved after this game and we were well clear of the three clubs mentioned, all of whom went down.