Home point dropped but lead at the top increases

On a week that saw only five Second Division games played because of FA Cup commitments, Burnley could only draw 1-1 at home against Bristol City although that was enough to increase our lead at the top of the table with second place Queens Park Rangers in cup action at the Baseball Ground against Derby County.

The row over the town’s family planning service continued and finally the council spoke out via Alderman Tom Gallagher. He accused critics of the service as talking a lot of silly twaddle. He then said: “I don’t agree with a completely free service, because old people have to pay for prescriptions until they are 65. A lot of these youngsters who are on the pill are making enough money at work to pay for it, but I agree with people who are destitute having the pill free.” In response to the council using religion as a motivation, he added: “This started twenty years ago when Mary Gillespie, a Catholic, was chairman of the Health Committee; the committee was not dominated by Catholics and as far as I can trace, in twenty years, it never has been.” 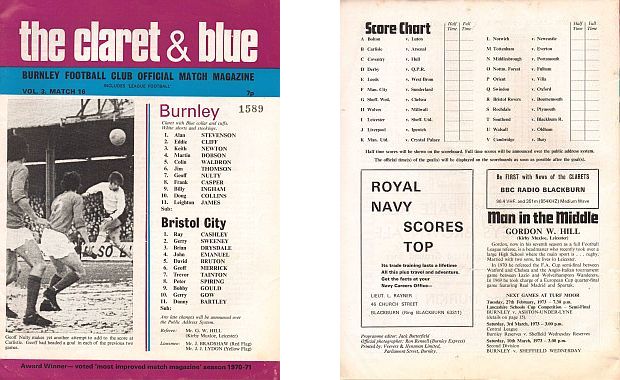 The Family Planning Service, whether free or not, was on the move with the opening of the new, and modern, St. Nicholas Health Centre in Saunder Bank. The facility would be home for nine general practitioners’ consulting suites, a common treatment room, a chiropody department and a dental unit, as well as the family planning.

Local traders were telling residents to get ready for ‘Mad March’ in anticipation of the introduction of Value Added Tax (VAT) which was replacing purchase tax. Mr John Wadsworth, a director of a local firm selling electrical appliances, explained: “Once we know the rate of VAT we can calculate prices and quote for delivery after April 1st.” Advising people to buy in March, he warned: “I certainly think that over a period of three to four months there will be a period of price increases by manufacturers.”

Just after Alderman Gallagher had revelled in the success of the measures taken to reduce vandalism came news of a disgusting incident in the Healey Wood area of the town in which nearly 100 young trees on Healey Heights were systematically broken by vandals. Gallagher called a special press conference to express his disgust at the act. The trees were among 700 on the Heights which had been planted to give the local landmark a natural park effect and planting had only finished two weeks previously. Gallagher believed the vandals to be in the older teenage group who had got to the trees by breaking through protective fencing.

Superintendant M. H. T. McKenzie-Folan, head of the Burnley police sub-division, said: “Inquiries are going on and we hope to catch whoever has done it eventually. There will be extra patrols in the area.” Gallagher said at the press conference: “I am utterly disgusted with what I have seen, and I am still prepared to say that this must be due, to some degree, to a lack of parental control. Do these vandals realise they are destroying not only their own environment, but that of everybody in the town, and probably the next generation? They must have warped minds to do this kind of thing. I would take away their weekends for at least six weeks and have them planting trees until they are sick and tired of doing it.”

How do you like your food? That was a question being asked when it was revealed that steak and kidney pudding and instant mash were likely to be your first meal should a large scale disaster hit town making you homeless. That was because of a master plan worked out by officials of Burnley Corporation’s Social Services department with thousands of such meals stored in case of such an emergency. Dr Luke Collins, the town’s medical officer, wanted a dummy run to test the system. I don’t know whether the dummy run happened but I can’t recall ever getting free steak pud and instant mash courtesy of the council.

Meanwhile, the M65 protesters were stepping up their plan of action. The Gannow Residents Association held a protest meeting at the Railway Club in Rosegrove at which members were encouraged to send in their objections. It was billed as a protest against ‘Motorway Madness’ and ‘The Destruction of Rosegrove’ and as local barber, Mr Harry Whitehead, explained: “People are starting to think that there’s only a few of us moaning about this road, there’s not, there are hundreds of us.”

During the week, four Burnley footballers visited Barden school. Geoff Nulty had been invited by Mr R. Robinson, the head of the school’s remedial department, to give a talk outlining the life of a footballer. Nulty arrived with team mates Billy Ingham, Leighton James and Ronnie Welch and after the talk the four players were met by a barrage of questions from the 40 boys in the audience. Mr Robinson was delighted with the response and said: “This should give the youngsters a spur to learn to read.”

As for the players, they were preparing for the visit of Bristol City in a week when the club confirmed they would again be using the Leagueliner train for the March game against Cardiff at Ninian Park. Around 400 tickets would be available on a first come, first served basis.

For the Bristol game, Paul Fletcher was still rated as doubtful, but when the teams were announced he was back in the starting line up with Billy Ingham returning to the subs bench.

Because of the limited league programme on the day, Burnley stretched their lead at the top of the league with this 1-1 draw but this was definitely one match that was easily forgotten. Incredibly, despite being top of the league, despite having lost only twice all season, the team were jeered by the home fans during the second half as the Clarets struggled to find any sort of form whatsoever. Manager Jimmy Adamson had often described the team as playing well only when it was in the mood and Burnley were clearly not in the mood for this game. A number of players had bad games and the others were unable to carry the team to victory.

We escaped with a point largely due to the performances of a few individuals and none more so than goalkeeper Alan Stevenson. He performed a one man rescue act in the first half when our creaking defence looked at times as if it were going to be submerged. Three times in five minutes he produced superb saves. He made an agile swoop to drop on Bobby Gould’s shot from point blank range, then he brilliantly kept out a header from the same player before denying him a third time, tipping a low shot round the post. Only Martin Dobson and Frank Casper, of the outfield players, were anywhere near the required form and the pair were involved when we took an early lead after a bright start that didn’t last anything like long enough. Casper linked well with Leighton James down the flank  before James crossed. City defender Brian Drysdale headed the ball out but only as far as DOBSON who ran in and hit a well controlled shot past goalkeeper Len Bond. That made the remainder of the first half even more frustrating knowing that another goal might just have seen them off.

Nothing much changed after the break and eventually the equaliser came. We could have no complaints as John Emanuel quickly got the ball back into the box after a half clearance where Steve RITCHIE ran in unmarked to head firmly past Stevenson. If anything it gave us a bit of a lift but in truth we never really looked as though we might score again until Dobson came so, so close with a late header. Even so, we were relieved at the final whistle to have at least got a point.

The draw took us a further point clear because QPR were without a game, but the day was even better than that with third place Aston Villa taking a 4-0 hammering at Orient and Fulham, one place lower than Villa, also losing at Nottingham Forest.

It meant that, with twelve games to go, we now had a seven point lead over Villa in third place and confidence was growing that our stay outside the First Division was only going to be two years.