We came from behind tonight to beat Aston Villa 2-1 at Leyland in what was our final home game of this Premier League 2 season which still leaves the door open for a potential play-off place.

We’d seen an effort cleared off the line and a penalty shout waved away as we dominated the opening ten minutes. It looked a matter of time before we scored but when the goal did come it was from Villa’s Travis Patterson against the run of play. 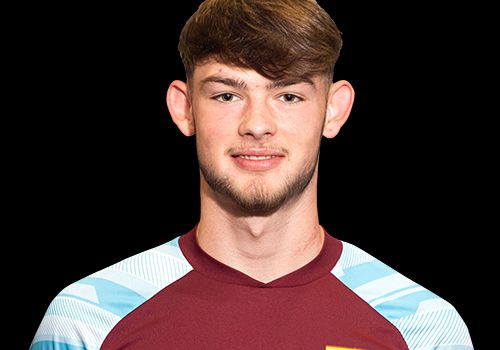 They had goalkeeper Oliwier Zych to thank for keeping them level when he saved from Anthony Gomez Mancini but when we won a free kick on the left we were back level. Ne-Jai Tucker’s kick was headed across goal by Richard Nartey for Dara Costelloe to fire home.

We were in the ascendancy for virtually the remainder of the first half and Villa had Zych to thank for a string of fine saves. In one attack, he made two outstanding saves and was then relieved to see the follow up shot from Finlay Armstrong hit the post.

All square at half time, we needed a good second half to enable us to secure a win that would keep is very much in the play-off frame. Zych again came to Villa’s rescue right at the start of the second half but his counterpart Lukas Jensen was soon proving to be Burnley’s key man as he made a number of saves in a half that proved to be much more even.

Both teams had chances but it was Burnley who won it with a first goal at this level for central defender Dan Sassi (pictured). He’s stepped up in the second half of the season with Jacob Bedeau out on loan, Bobby Thomas with the first team and Harry Williams not involved, and he’s taken it in his stride defensively. Tonight, he came up for a corner, taken by Owen Dodgson, and headed it powerfully into the corner to win us the game.

There were chances at both ends after the goal, and we definitely looked very capable of catching Villa on the break on a number of occasions. But we secured the win and that takes us into the final game at Fulham looking for a result to make the end of season play-offs.