Home rule for Clarets with another three points 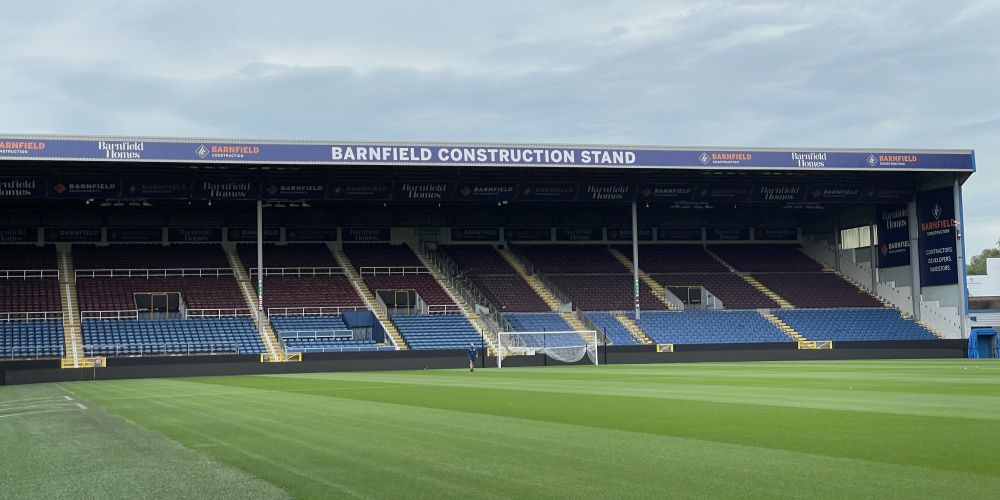 Goals from Manuel Benson and Jay Rodriguez secured the Clarets a second home win of the season with a 2-1 victory against Bristol City to move us up one place to fourth in the Championship table.

It was a game that we probably should have won more convincingly but, yet again, we were left on tenterhooks right until the end as the visitors pushed for a second equaliser of the afternoon, a push that ended with the referee’s final whistle four and a half minutes into stoppage time.

Although it’s only two and a half weeks since we last played at home, the 2-0 win against Millwall, it did seem an age. That’s probably because of the two away draws and the postponed Norwich game eight days earlier, so it was good to be back to the Turf and it was an early departure for me as I was part of the West Yorkshire Clarets team of volunteers manning the Clarets for Foodbanks bins.

I must make it clear though, I’ve not been converted, I’m a Lancastrian through and through and I think my first ever visit into the county with the colourless rose was probably to a cricket match at Todmorden. I’ve represented this Supporters Club at Burnley FC Supporters Groups for a number of years and am always happy to help them with such a worthy cause.

Embed from Getty Images
There was an incident, of sorts, as I made my way round to pick up the wheelie bins although I have to say I was no more than an observer. A steward was part blocking one of the photographs of Jimmy McIlroy on the outside wall of his stand with barriers and a supporter politely asked him if he could maybe move them to one side so anyone wanting a photograph of Jimmy could get one. The steward, who was wearing a jacket with the words “I am here to assist” on the back, or similar words, told the supporter: “I can’t be arsed.” I hate to think what he might have told him had he not been there to assist.

And so to the food collection. I was stationed in the lane (Ormerod Yard to give it its correct name) behind the cricket pavilion and, as always, it gave me the opportunity to catch up with a few people I’ve not seen in a while. While there, the team news came through showing two changes. We knew Charlie Taylor was out and we expected Jordan Beyer might get his first start; he did. The other change saw Ian Maatsen restored after being left out at Preston with Vitinho (who, according to terrace songs, is Brazilian) taking a place on the bench.

Ahead of the game, along with the rest of football, we again observed a minute’s silence followed by the singing of the National Anthem in respect of Queen Elizabeth II. Again, as at Preston, it was impeccably observed and was football showing its respect in the best possible way. I have to say, and I know some will disagree, that the subsequent minute’s applause during the game was totally unnecessary and I’m sure a goal must have been scored somewhere to disrupt it.

Attacking the cricket field stand in the first half, we quickly got into our stride with Benson prominent right from the start. Targeted by both Watford and Preston in his previous league starts, he did the targeting this time by taking on the Bristol City defence and he all but set up a goal in the opening minute when his low cross just evaded Nathan Tella coming in from the left.

Embed from Getty Images
Burnley and Benson were not to be denied. It all came from a Bristol City throw in their right-back position. Maatsen won the header from the throw and when their leading goalscorer Tommy Conway it dropped for Benson a few yards outside the box. He moved forward and got into the box before firing home left footed at the near post. If I was slow celebrating the goal, it had nothing to do with a VAR wait; I actually thought initially that the shot had gone wide.

Tella got down the left. He checked and laid it back for Josh Brownhill whose volley looked goal bound until a defender got in the way and then, with the move of the game, Tella should have scored. We played the ball down the right for Benson to come between two players to move the ball inside for Rodriguez. The striker found Maatsen on the run and his ball into the box reached Tella who fluffed the easiest of opportunities.

We could easily have been three or four in front by this point but then came the Achilles heel with us conceding from a corner for the second successive game. Let’s get one thing straight, it should never have been a corner. When they played the ball forward, ex-Claret Nahki Wells was clearly offside as he got onto the ball. It wasn’t even close and I just assumed the assistant would allow the move to run before putting his flag up at an opportune moment. He waited until the ball went out of play and astonishingly awarded a corner.

Embed from Getty Images
If his decision making was bad, so was our defending of the corner. It hit Taylor Harwood-Bellis at one point on the line before Wells, and it just had to be Wells, turned it in. How on earth we were only level was hard to believe.

It might have got worse too. Our response was just one free kick that went wide before, just seconds into time added on, Conway looked a certain scorer but Arijanet Muric was out quickly to deny him. Had they scored, and we’d gone in behind at half time, it would have been ridiculous. As it was, they must have been delighted to get in with the scores level at 1-1.

The early minutes of the second half were concerning as the visitors started well although Wells’ looping header that Muric tipped over the bar was their only real effort. I felt the first substitution helped turn things back our way. I have to admit to being surprised that Benson was withdrawn, although it has since been confirmed he was suffering from tiredness, but it brought on Jóhann Berg Guðmundsson who was quickly into the game and might have scored with potentially his first touch. I thought Brownhill should have shot himself but when he laid it off to Guðmundsson, his shot was almost like a back pass.

Anass Zaroury was next to come on and he’d hardly got warmed up when we scored what proved to be the winner although he didn’t play a part in the goal. Jack Cork and Connor Roberts were involved, getting the ball out wide on the right to Guðmundsson. His excellent cross was met by Jay Rod who headed home into the far corner. It really was an outstanding goal.

Embed from Getty Images
It wasn’t all done and dusted though and Harwood-Bellis got in a great block to deny them but we always looked the more likely and Daniel Bentley did well to get down and save from the again impressive Zaroury.

When that final whistle blew, it was another win, a fourth of the season as we head into the international break. It can be so frustrating at times and we should have had this game won in its first quarter. Overall, we were by far the better of the two sides and we need to see off teams rather than leave ourselves potentially vulnerable in the closing stages. I’m sure that’s something that will come.

Individually, for me, Rodriguez and Cork were outstanding but there were others who did so well, none more so than Beyer who I thought did really well on his first start for the club. When we set off for Huddersfield in late July, I suspect we all wondered just how good or how not so good we might be. I reckon then, we’d have all taken seventeen points and only one defeat from the first ten games. The manager suggested yesterday that we have a real capacity to improve. If that’s the case then I reckon some of the other clubs in our division need to be worried.