It was Ashley’s day against Blackburn

Ashley Barnes scored his first league goals of the season in last Sunday’s demolition of local rivals Blackburn Rovers, scoring the first and third in the 3-0  victory.

His all-round performance deservedly won him the man of the match and the player ratings on a day when so many other players had turned in outstanding performances. 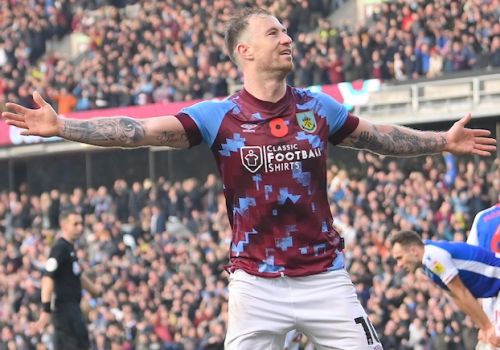 Barnes won the man of the match with 68% of the vote, followed by Josh Cullen in second place with 10% who was just ahead of Anass Zaroury, scorer of our second goal, who also won 10%. Josh Brownhill, who secured 6% of the vote took fourth place.

It’s ten points for Barnes towards the Up the Clarets Player of the Year with Cullen winning six points and Zaroury four points with one point apiece for Brownhill and Harwood-Bellis. It hasn’t had a big effect on the top of the table although Zaroury, who is in third place, has now gone four points ahead of fourth place Brownhill.

This being the final game of November, has seen Manuel Benson become the player of the month with thirty points won in the four games. He joins previous monthly winners Brownhill (August), Cork (September) and Zaroury (October).

It will be a while before the next man of the of the match; that will come after our game at QPR on Sunday 11th December.