It’s a draw at Fulham despite early goal

The first away game of the 1972/73 league season brought Burnley the same result as the first home game had done. After drawing 2-2 against Carlisle at home we travelled to Fulham and came home with another point from a 1-1 draw. 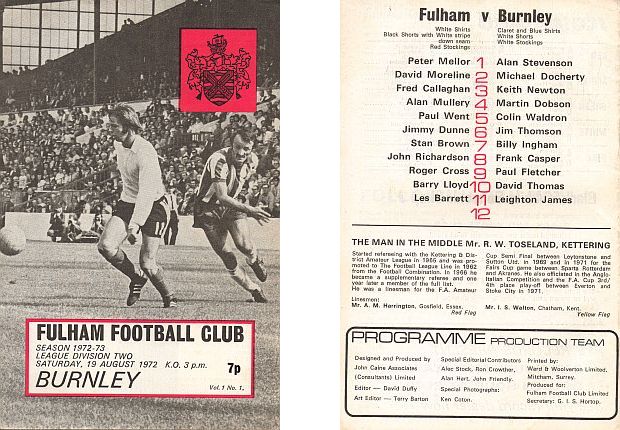 It appeared the town was coming to something of a standstill with strike action being taken at Lucas and on many of the building sites. Lucas Aerospace and their workers were in deadlock and there was no sign of a solution. They’d offered an increase of £2.75 per week for skilled workers and £2.50 per week for non-skilled workers with a promise of more money to come in October. However, they weren’t prepared to reveal the October figures until the men returned to work.

As workers on more and more building sites downed tools, the police were called but they admitted there had been no sign of any trouble whatsoever. All the men were asking for was a decent wage and a shorter working week. Several constructions were brought to a stop, including the new William Thompson Centre, the town’s new multi-sports venue on the corner of Centenary Way and Red Lion Street. In total it was estimated that over 2,000 workers in Burnley were on strike with a further 300 threatening action.

A big problem in town was that of stray dogs with the public works committee revealing that they could not longer deal with a problem that had become too much for a dog catcher and a dog pound. Handing the problem over to the police, Councillor John Hudson said: “It would mean employing a labour force for something which is no longer our problem.” It was confirmed that, in future, all stray dogs would be taken to kennels in Altham but that the cleansing and transport department would continue the destruction of small animals.

Besides stray dogs, there were also Straw Dogs in town. Whilst the debate continued over the quality of films being shown at the town’s Studio 1 & 2 Cinema, this week’s offering was Straw Dogs starring Dustin Hoffman and Susan George. I saw that film, but I can’t recall seeing any dogs, straw or not. It wasn’t the only entertainment as we went back to the ‘Good Old Days’ and an old time music hall evening at the Keirby Hotel which was to be one of three big  charity events. All tickets had been sold to VIPs with none going on sale to the public, and that had caused some discussion. Comedian Bernard Manning had been booked with a spokesman confirming: “We have an orchestra and about half a dozen acts besides a professional compere and Bernard Manning.”

Council leaders were extremely worried when the results of a survey showed that over 700 old people in Burnley received no regular visits from friends. They were concerned that some of them could become desperately lonely. Still, never mind, Mr J. Moorwood, deputy director of the services dealing with the problem commented: “They may, in fact, not want to be visited. It could even be that they are not really living alone and, therefore, do not want other people to visit.” Problem solved then, but you do wonder just how people like Mr Moorwood ever land these jobs in the first place.

One man, not quite of that age, wasn’t lonely any longer. He wanted his identity to remain a secret and was only prepared to confirm his Christian name as Tom. He’d had eye problems for just about all of his life and had been virtually blind. At the age of 58, he’d had pioneering operations on his eyes which had restored his sight. He couldn’t contain himself. He was taking regular walks down the canal, was off to Blackpool to see the illuminations and had taken up reading. “He got so miserable and depressed it affected me,” admitted his relieved wife. “Life’s much pleasanter now, we can both begin to live again,” she added.

The town had staged its own Golden Globe Awards, but on this occasion the golden globe had been removed from the top of a belisha beacon in Church Street by three men who were throwing it to each other. Unfortunately one of them threw it too hard and hit a passing vehicle. They legged it into a taxi office but some do gooder got the police and all three of them went to court where Mr H. G. W. Cooper, for the defence, said there was no case to answer because the men had been jointly charged and only one of them had thrown it. The magistrates threw it out of court (that’s the case, not the golden globe itself which didn’t attend). “From the evidence given we have found there is no case to answer,” said chairman of the magistrates Mrs G. Wilkinson.

My favourite story of the week was that of a 22-year-old who was jailed for deception. The man arrived in town and stayed at Stewart House (later to become the Alexander). Whilst here he visited Arthur Benn to buy some footballs and kit, revealing that he was setting up a boys’ football team. He told both he had been a professional footballer. The problem was, he paid Stewart House and Benn’s with cheques that bounced and landed himself in court. He admitted obtaining property worth £42.20 by deception from Benn’s and obtaining pecuniary advantage to the value of £36.96 by deception, and that was for his accommodation. Admitting 12 other offences in Rawtenstall and Torquay, he received two six month prison sentences to run consecutively, and was told he would serve the full year.

Ahead of the trip to Fulham, transfer listed Dave Thomas admitted it was great to be back in the first team.”I was grateful to get out there and play and forget about all the things that have been happening off the pitch,” he said. “The only games I had played in were at Newport and for the reserves against Netherfield so I was dead chuffed to be back in action again.”

Meanwhile, manager Jimmy Adamson sprung another surprise with the shock inclusion of midfielder Doug Collins in the travelling party of twelve players. The manager also confirmed he had not yet decided who would be substitute although it was expected that Collins would take the number 12 shirt. “Doug Collins was the outstanding player for the reserves against Leeds on Tuesday, “ said Adamson. “He also had a good game against Wolves reserves on Saturday and has earned his chance.” When Adamson finally named his team, Collins was in with Billy Ingham dropping to the bench. Collins took the number 10 shirt with Thomas switching to number 7.

For the first half of the game, Burnley played like champions and led 1-0. Unfortunately the second half was completely different with referee Ray Toseland from Kettering accused by many of ruining the game as we had to settle for a 1-1 draw.

It had all started so well. Leighton James won a free kick in only the second minute. Collins took the kick and played it to Jim Thomson. He pushed it through for JAMES who neatly controlled the ball before slipping it past former Burnley goalkeeper Peter Mellor. Mellor had been boasting all week that he’d keep a clean sheet against Burnley. With less than two minutes gone his hopes of doing so were gone.

From then on in we totally dominated the first half and it was hard to believe that we didn’t add even more goals to the one we’d got. It was something we would pay for. Peter Higgs, reporting for the Burnley Express, said that he’d have put his coat on Burnley winning at half time, admitting that had he done so he’d have had a cold journey home.

The only concerns were referee Toseland who had already booked both Colin Waldron and Mick Docherty for nothing other than mis-timed tackles. It unsettled us and we lost our grip of the game. With only five minutes of the second half gone, Fulham  equalised. David Moreline overlapped down the right and won a corner off Keith Newton. Former England midfielder Alan Mullery took the kick and found Paul WENT at the near post to head home.

Frank Casper was booked; Mullery followed him and then the referee decided enough was enough and began to let bad challenges go unpunished. In the end, players had no idea what was going on and the game suffered terribly for it. Even so, it was another point but Adamson was far from happy. “With so many bookings being made we just stopped playing,” he admitted. “Nobody wanted to win the ball for us because they were afraid of being booked. It sounds like sour grapes to blame the referee, but it was because of the way he controlled the game that made us stop playing. Managers complain so often when their players are booked that people take little notice, but I have never criticised any other bookings we have received this season.”

Higgs said he believed referees like Toseland would drive supporters away from football and said the authorities had to do something to stop this kind of refereeing.

Elsewhere, Blackpool had the biggest score, hitting Brighton for six. Tommy Hutchison got two of them with Willie Irvine getting both Brighton goals. Also among the goalscorers were two more players who, like Hutchison, joined Burnley under John Bond. Gerry Gow scored for Bristol City and Dennis Tueart for Sunderland. Sheffield Wednesday were top, above Aston Villa on goal average, but they’d played a game more. With two points from two games, Burnley were in tenth place.

This was a special day for one young Burnley supporter. Joe Vella is from Malta and is a regular contributor to this website’s message board. This was the day he was able to see Burnley for the first time after he travelled to London. Unlike most of us, who just paid our money at the turnstiles and went and stood on the terraces, Joe was the club’s guest at Craven Cottage. A first game wasn’t a last game for him, he’s remained a committed Claret for almost half a century since and below are two of Joe’s souvenirs from the day. 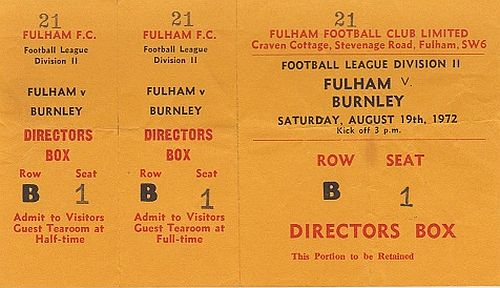 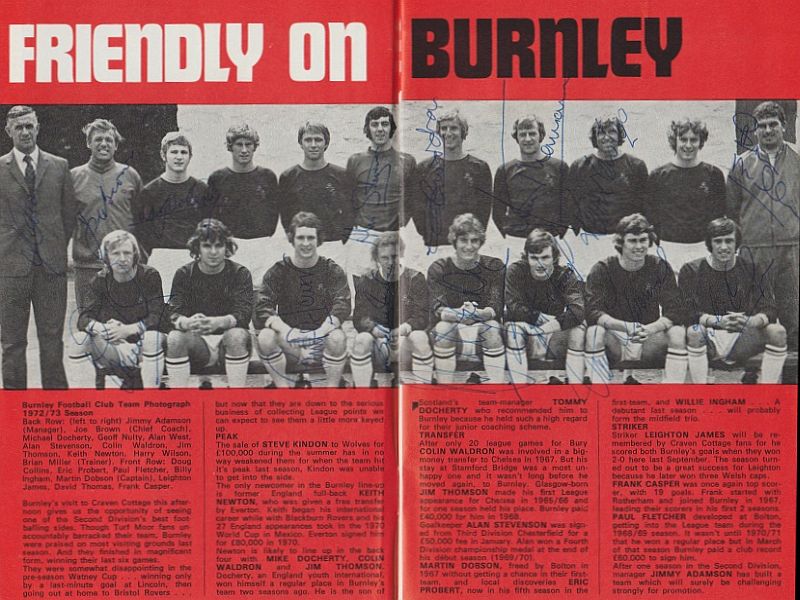