It’s another replay as Burnley battle back in the mud

For the third round in succession, Burnley won themselves a Turf Moor FA Cup replay. Having beaten both Lincoln City and Swansea Town after replays the team of sixty years ago were now looking to make it a hat trick against Bradford City.

Again the weather was headlining in 1960 as winter returned to the Burnley area during the week. More snow and ice was on the menu causing chaos on the town’s roads. Thankfully gangs of workmen, toiling round the clock, won the battle against the drifting snow, black ice and slush meaning the borough’s roads were mainly kept passable and free from major accidents. Over 400 tons of materials were spread over the town’s highways and byways, and the prompt action by the Cleansing Department, assisted by men from the Works and Highways Department, drew special praise from the police and local transport undertakings.

One area where the roads had to be closed was the Manchester Road area. In blizzards considered the worst for thirty years, the drifts completely blocked the roads at the Summit. Police had no option but to close the road with vehicles unable to get through. Thankfully the only two accidents of note were outside the borough but there were six Burnley people injured in one of them as a car skidded into a low wall at Foulridge. In the other accident a BCN bus plunged fifteen feet down a steep embankment at Laneshawbridge, the driver receiving head injuries.

On the Friday came the exciting news of the Royal birth. Townsfolk had been warned in advance by the Mayor, Councillor Miss Edith Utley, that they should celebrate the event. At 4:00 p.m. on 19th February came the news that a son had been born to Her Majesty the Queen. Miss Utley couldn’t wait to sent a telegram of congratulations on behalf of ALL the people of Burnley. The telegram from Burnley was sent to the Queen’s Private Secretary and read: “On behalf of all the people of Burnley, I send loyal greetings and hearty congratulations to Her Majesty the Queen and His Royal Highness, the Prince Philip, on this happy and historic occasion.” Miss Utley ordered flags to be flown and confirmed that arrangements were in hand to hold the carnival ball at the Mecca Dansette Empress Ballroom that very evening. Yesterday, that newly born of 1960 celebrated his 60th birthday. I wonder whether the current Mayor even considering sending best wishes on behalf of the town to Prince Andrew.

It was a double celebration for Towneley High School head Mr Harry Lancaster JP who announced that he was to retire in August. A stalwart of the NUT, he’d been at the school since its inception and pledged to enjoy his music and work as a magistrate during his retirement. There was a warning for another Burnley school and it still hadn’t opened. St. Theodore’s, the new Catholic boys’ school was in the course of erection but the Very Rev Canon L. A. Maxwell RD told parishioners that the school was already too small by a large number of places. An increased financial burden would have to be met by local Catholics. Some of those Catholics had been raising funds during the week, they being members of the Catholic Youth Centre in Plumbe Street. They held their first ever old-time and sequence ball with over 200 people of all ages attending. The ball was to raise funds to improve heating facilities for the centre and they raised almost £30 on the night.

There was a well known local Lancashire League cricketer in court. West Indian Stanley Wolfe was fined £10 with £11 10s costs for causing unnecessary suffering to pigeons. Twelve of Mr Wolfe’s pigeons had died of starvation. The weren’t the only birds to form part of a court case after a trail of blood and feathers in the snow was followed by two police officers from Plane Tree Farm, Rossendale Road to a house in Dalton Grove. There the police officers found five hens missing from the farm in a kitchen cupboard and the occupier of the house, a 22-year-old railway fireman, pleaded guilty to stealing the hens which were valued at £5. He was fined £10 and told the court he had no idea he had stolen them. “I had too much to drink and I can’t remember anything,” he told the court. “I didn’t know I had done it.” He came to an agreement on how to pay the fine and then rushed off home for breakfast, presumably with two fresh eggs.

It seems hen stealing was a popular pastime and two more men were in court on similar charges. One of them, a 19-year-old, was given a warning by the court. He was told by Burnley magistrates: “We are very distressed about you. You are 19 and a married man and you are behaving like a child who doesn’t know what he is doing.” These hens had been stolen from a hen pen in Whittlefield and the two men were spotted walking down Westgate with them wrapped up like parcels. The 19-year-old was placed on probation for a year to help him settle down.

Now finally to this much awaited cup tie at Bradford City. The team had once again been to Blackpool for special cup tie training but on the previous Saturday, with our league game at Birmingham called off, the whole team went to Valley Parade to check out the opposition. The players had seen them draw 0-0 against Bournemouth & Boscombe. 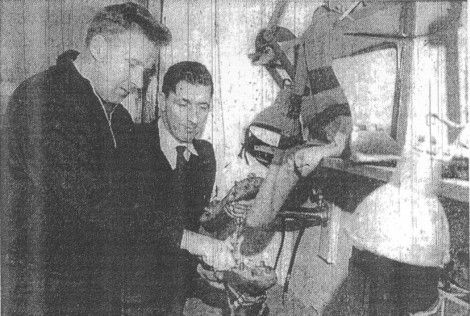 News from Bradford on the Friday was that the match would almost certainly take place. Mr Miller, the Bradford City secretary, told the Burnley Express: “We have escaped the heavy snow this week, we had just an inch on Thursday and it is all gone now. It has left water on one side of the pitch which is freezing. We are breaking up the ice layer and hoping that it will have disappeared by morning. If there is a heavy thaw, the ground will be on the heavy side.”

Burnley supporters had been holding friendly arguments all week as to which was the best way to go to Bradford but there was help in hand for those who opted to travel via Halifax. They were informed that they should follow the AA signs clearly marked ‘FA Cup Tie’.

The thaw did come and the pitch was heavy to say the least on a day when Burnley were saved by an injury time goal to get that Turf Moor replay three days later.

Ebb-Tide! That was the appearance of the Bradford City ground and Burnley were within minutes of being stranded high and not so dry in the mud while the home team appeared to be sailing enthusiastically into Round Six. For the Turf Moor side, Valley Parade almost became the Valley of Despair. They escaped with memories of a Slough of Despond from which they emerged with a somewhat tarnished reputation.

This saving grace was a fighting spirit which aided them to pull back a 0-2 deficit and give them – once again – a second chance on their own pitch for the third time in three rounds. Yet on opportunity alone they should have been at least five goals in front at half time.

Conditions were atrocious and Jimmy Robson was the first to feel the cold embrace of the sloppy surface and after various slithers emerged not only disguised as a ‘Magpie’ but from the look of his stockings appeared to be playing in Wellington boots.

Burnley were the better side in the first half but all the goals were to come in the second half and City provided the shocks. After Derek Stokes had beaten Brian Miller on the dead ball line and Adam Blacklaw saved the situation, Robert WEBB moved into the middle and opened the scoring with a left foot drive. Jimmy Adamson then missed his tackle inside the Bradford half and David Jackson promptly hammered a long pass to David Boyle. Stumbling, slipping, harried and hindered, the outside left fought his way down, somehow kept possession and slipped a square pass inside to the unmarked STOKES who merely had to pick his spot.

Joy for Bradford, gloom for Burnley, but four minutes later John CONNELLY put Burnley back in the game from a move featuring Jimmy McIlroy, Robson, Ray Pointer and Brian Pilkington. It looked all over though but, in injury time, Pilkington fell and a free kick was awarded. A terrific battle raged on the City 18-yard line, Pointer headed against the bar and then CONNELLY took the ball through a gap in the flying feet and saved Burnley. Irate City supporters stormed the press box protesting about the free kick decision which led to Burnley’s equaliser, although how they expected that to do any good passed comprehension.

So a draw, and a replay for a place in the last eight of the FA Cup. By the time the two teams met again at Turf Moor they would know their next opponents should they win through.

There were three First Division games played on the day, but none of the results affected the top or bottom of the table.

Whilst the first team were getting that draw, injuries to Colin McDonald and David Smith severely hampered the reserves at the Baseball Ground against Derby. We lost the game 6-3 with the Burnley goals coming from Gordon Harris, Jimmy Scott and Andy Lochhead.