Burnley kicked off the day in third place in the Fourth Division, a point behind both Blackpool and Mansfield Town, but ended it one place higher after beating Mansfield 1-0 at Field Mill.

It was bad news for licensees at two local pubs when news came through that millionaire accountant David Wilson had been gunned down at Brinscall, near Chorley. Mr Wilson owned a company called Leavercolt Ltd which owned the Greyhound in Brierfield and the Adelphi in Burnley but the company had found itself in trouble. Joan Barnes at the Adelphi said she’d lost £9,000 but had, at least, been told that she could stay until a buyer was found for the pub. 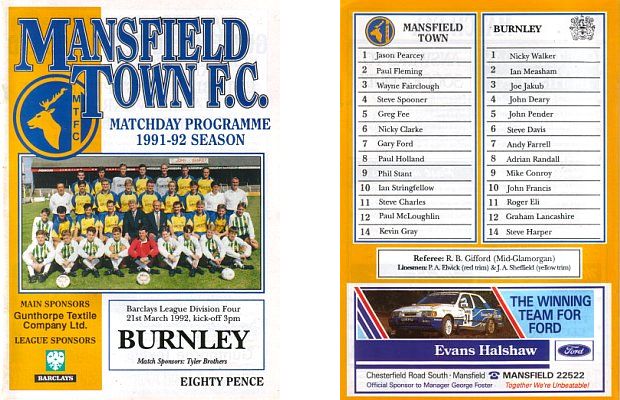 David Wilson might have been dead but local councillor Marcus Johnstone was alive despite receiving death threats. He took the threats so seriously that he admitted that he cracked in a council meeting and used inappropriate language which upset members of the Conservative group. In a letter he sent to the Tory leader, Johnstone wrote: “When you and your fellow Conservatives accused the Labour group of not doing enough to collect the poll tax, I felt exceedingly angry and used a phrase which, under normal circumstances, is not part of my vocabulary.”

There hadn’t been any further accidents at the junction of Manchester Road and Hargreaves Street but the Burnley & Pendle busmen had just about had enough. While councillors were pointing fingers at motorists for not seeing ‘Give Way’ signs, the drivers were demanding traffic lights. Thirty years on, I can confirm there are traffic lights at that junction.

The same busmen had turned down a pay offer, as we confirmed in last week’s report, and now the Ribble busmen were told they would have to take a pay cut. The matter was being taken up by their union with the company beginning to issue threats of job losses if they didn’t accept the reduced pay.

There had been a disturbance in Kinross Street in Burnley for which the police were in attendance. Everything might well have been sorted until 72-year-old pensioner Edward Gregory decided to hit one of the policemen over the head with his walking stick. He was found guilty of using threatening, abusive or disorderly words or behaviour and, worse still, committing damage to the officer’s anorak. He was left with a few pounds in costs but received a conditional discharge while the copper apparently had a bit of a headache.

Poor Jack Pearson. The 55-year-old had a long criminal record and found himself in court for shoplifting where the magistrate were told that again it was down to his drinking. Jack was seen placing a few items into a carrier bag in a shop to the value of £7.74 and then leaving without making any attempt to pay for them. He was defended by Basil Dearing who told the court: “I am sure you have seen Jack Pearson before. Not a great deal has changed with Jack except he is a little older than last time he was here.

“He is still drinking and lives where he can. His benefits go on accommodation and drinking, and he spends most of his time with the same crowd. He was well and truly the worse for drink that afternoon and he was persuaded to do what he did. Fortunately his offending is not as frequent as it was at one time.” I’m not so sure Basil could have got him off but I think poor Jack might have expected more support from his defence.

There was panic at the Thompson Centre when they realised that none of their vending machines would accept the new 10p coin that was about to come into circulation. Given the cost of the upgrades it left a dilemma and this, of course, was in the days before contactless payments and when cash was king, except the new 10p coins.

The week had seen Ben Lee laid to rest. The funeral was held at a church close to Ben’s home in Knutsford. There were more than sixty representatives of Burnley Football Club present, led by chairman Frank Teasdale who said: “I have never been to a more well attended funeral and I have seen a few. He was very popular at the club and that was obviously the case with his friends at home because there were a lot of young people there. I thought it was a fitting farewell to a very nice young man. It was a very moving service. Afterwards we went on to the crematorium and there was a reception arranged by his family.”

Jimmy Mullen attended the funeral but by Friday was preparing for the game of the day at Mansfield with much of the talk once again about goalkeepers. This was expected to be Nicky Walker’s final game for Burnley. As was the case with Andy Marriott earlier in the season, Burnley were keen to either extend Walker’s loan or sign him permanently but Joe Jordan, boss of his club Hearts, had no intention of allowing either. Mullen said he’d try speaking to Jordan again. He also reported that Steve Davis was fit again but there was a doubt about Ian Measham for the big game at Mansfield.

This was as tough as it could be. We’d beaten Mansfield 3-2 at home in a cracker of a game but with Andy Farrell deputising for Measham at right-back, this was an outstanding afternoon for the Clarets in somewhat windy conditions at Mansfield. “We took them to the cleaners,” reported Edward Lee in the Burnley Express.

He added: “We could, and perhaps should, have won more convincingly than the single goal success. They (Burnley) simply wanted to win more than their promotion chasing rivals. They simply wanted more of the ball and got it. It was a terrific performance on a day when the wind could have taken over, and it was a win that got Burnley three points which could make all the difference. They are now knocking on promotion’s door. They are almost there, but it is by no means over. Promotion is there for the taking and so is the championship.”

On a tense day, we really did play well, from the defensive pair of Davis and John Pender between the two excellent full backs Farrell and Joe Jakub. Adrian Randall had his best game yet in midfield alongside John Deary who was, well, just John Deary, winning almost everything. Steve Harper and John Francis repeatedly caused Mansfield problems down the wings, Roger Eli was a massive threat and Mike Conroy did what he did and scored the goal.

Francis was close to an early goal only for Jason Pearcey to deny him with a good save and two minutes later Randall fired wide with a good chance. Eli was then wiped out by Pearcey as the Clarets took control. At the other end, Walker was doing everything required of him when Mansfield did get forward but there was nothing he could do when Phil Stant lobbed him. It sailed over the Burnley keeper and thankfully the bar too.

Mansfield were having a good spell as half time approached. Could we hold on at 0-0 until the break? No, we did better than that. With around four minutes of the half remaining, Harper made a run up the left wing. He played the ball into the box but it was only half cleared to Deary who in turn moved it on to Conroy. The striker played a one-two with Francis, getting the ball back with a back heel. As the ball fell back into the path of CONROY he hit a super left foot shot past Pearcey from just inside the penalty box.

Right on half time he nearly got a second with a volley that went just wide but we led at half time and then dominated the second half without ever really threatening to score again until Pender saw a header cleared off the line close to the end. Mansfield had hardly had a kick but it took a double save from Walker some four minutes from the end to ensure that one goal was enough.

Jimmy Mullen was thrilled with the result and the performance and was now getting a bit carried away, setting a one hundred point target which would mean us needing to win all of our last ten games. “We came to Mansfield to win, and I’m delighted,” he said. “But we go to every match aiming for a win. There are thirty points up for grabs and I want all thirty.”

The win took us above Mansfield but we remained a point behind Blackpool who beat Sean Dyche’s Chesterfield 3-1. We still had two games in hand on the other teams in the top four and things were looking good.

Not so for poor Aldershot. They were now eight points adrift at the bottom and had been beaten 2-0 at Cardiff on the Friday night in a game that would soon prove to be very significant.