It’s Samba football at the Turf after Northern Ireland tour

Having played four games in Northern Ireland, Burnley staged two home friendlies in 1997 with the first of them really catching the imagination as we took on Brazilian side Gremio.

Once back in England, manager Chris Waddle had made a move to bring in a new striker and also confirmed the appointment of his new reserve team coach as we moved closer to the start of the new season. 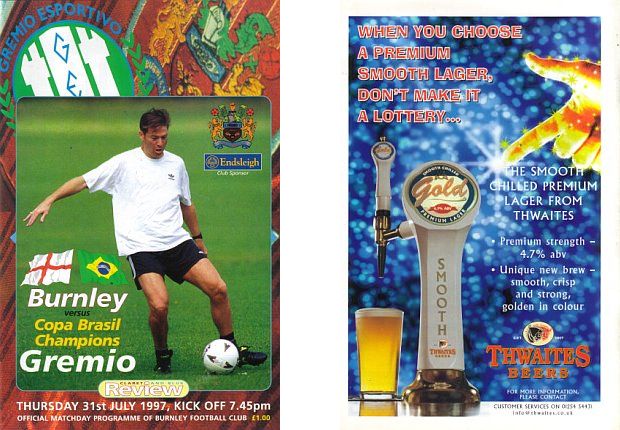 The striker he’d made a move on was familiar to Burnley fans. Waddle made an offer for Sunderland’s John Mullin who had left us for Wearside two years earlier for a £40,000 fee. He’d gone on to leave his name in the Sunderland records having scored the last ever goal at Roker Park before the move to the Stadium of Light that summer. It came in a 1-0 win against Liverpool and, appropriately, at the Fulwell End in front of a packed home support.

Waddle had played alongside Mullin in the previous season at Sunderland and was keen to bring him to Turf Moor, but any move was scuppered by Peter Reid even though he’d just brought in a striker from Watford, paying £600,000 for Kevin Phillips. Reid explained: “I am loath to let the lad go at this stage. The new season is nearly upon us and I don’t want to leave myself short up front.“

While the search for an additional striker continued, Waddle confirmed that Gordon Cowans would indeed be the man to replace Harry Wilson as reserve team coach. His appointment had been delayed while he was on a pre-season tour with Stockport but he’d arrived at Burnley on the day before the Gremio friendly.

Assistant manager Glenn Roeder said of him: “Gordon has a lot of experience at the highest level of football. He has wanted to move into the coaching side of the game for some time now. Chris Waddle has known him for many years after meeting with the England set-up, and they both played together at Bradford last season. He comes from a footballing family as his dad used to coach at Villa. He is a very sound person and a footballing person.”

Over five and a half thousand turned up to watch Burnley take on the Copa Brazil holders Gremio but the big disappointment for the home fans was the unavailability through injury of new midfielder Mark Ford, who had impressed in Northern Ireland, and the absence of Waddle himself who opted for a place on the touchline.

As it happened, the Gremio we were expecting was not the Gremio on the pitch. They fielded a virtual reserve team but, even so, there was so much to enthuse about with the Burnley Express suggesting that the Waddle revolution was in full flow.

We won the game 1-0 but had we taken our chances it could have so easily been three or four goals. We might have been in front right from the start too but no one could quite get onto a Paul Weller cross.

Gremio pieced together a typical Brazilian move but it was Burnley often in the ascendancy, causing our South American visitors a lot of problems at the back. Andy Cooke’s header from a Chris Vinnicombe cross went just wide of the post and with Damian Matthew and David Eyres controlling the game it seemed only a matter of time before we scored.

We did just that midway through the half with what was the only goal of the game, and when it came it was a simple goal with Eyres getting down the flank and COOKE coming in to slide a shot into the corner of the net.

One was so very nearly two only for Silvio to make a superb save to deny Cooke a second.The same two players were involved early in the second half with the Burnley forward denied again and there was over an hour gone before Marlon Beresford was called into action at the other end.

By then, we’d made one substitution and another five followed. That included three players from the youth team with Phil Eastwood and Ian Duerden getting first opportunities alongside Gareth West. There was also a surprise appearance for the aforementioned reserve team coach Cowans. It was Eastwood who came closest to scoring a second Burnley goal only for Silvio to deny him when he brilliantly tipped over what would have been a sensational goal from fully thirty-five yards.

Matthew, Eyres and Cooke had been the standout players with Richard Huxford having an excellent game at right-back.

The manager said afterwards: “I was impressed with every player against Gremio. In fact, all the players who featured against Gremio were a credit to Burnley Football Club. They’ve shown me what they can do and what they are capable of. That’s the standard the players have set and it is up to them to continue that.”

Explaining that he didn’t play due to a throat infection, he added: “We are a terrific side when we’ve got the ball. We also need to be a good side when we’ve not got possession. Against Gremio we won the ball back as quickly as possible and did it very well.”

It left us with one more pre-season game, against Manchester City two days later, before kicking off the new league season against Watford.