When Bob Lord sacked Jimmy Adamson in January 1976, in a continuation of his policy, he turned immediately to Adamson’s assistant Joe Brown to take over with the team struggling third from bottom of the First Division and out of the FA Cup.

Joe Brown had already been a coach at Turf Moor for fifteen years when he was chosen to replace Adamson. It was undoubtedly a difficult time to take over and he was never really able to have an impact in just over a year in the role. 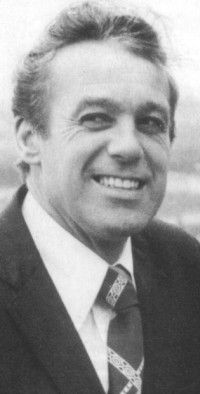 Without doubt Joe was one of the nicest people you could ever wish to meet. I sometimes wondered if he was strong enough to be a manager and perhaps that was a problem. I’m never convinced he wanted to be a manager.

He’d played for Burnley in the early fifties, having signed from Middlesbrough in August 1952, but a serious back injury restricted him to just six first team appearances and, after almost two years with the Clarets, he moved on to Bournemouth where he played on over 200 occasions. After a short time at Aldershot he returned to Turf Moor as a coach in 1961. His biggest success probably came in the 1967/68 season. He was in charge of the youth team that went on to lift the FA Youth Cup that season. He was very highly thought of as a youth coach but was promoted to first team coach when Adamson became manager in 1970.

Adamson and the non-drinking, lay preaching Brown were an unlikely combination but his promotion led to six years of him working with the first team before he accepted the manager’s position although it was anything but easy for him, taking over a team that was already in the relegation places and with players who maybe didn’t give him the commitment they should have done because of their loyalty to the dismissed Adamson.

His first game in charge was at Norwich and I can see the banner now that was displayed by the Burnley fans that day at Carrow Road. It read: “We won’t go down … we’ve got Joe Brown” but sadly we did go down.

That game proved to be Frank Casper’s last for Burnley because of injury. It was also Mick Docherty’s final game and Brown left Willie Morgan out and he never played for us again. Other players, those who had sided with Adamson, were left out of the team including Doug Collins and notably captain Colin Waldron. It is firmly believed he was prevented from using these players by the chairman.

There was to be no quick return to the top flight. We struggled in the Second Division almost from the start and with the crowd getting more restless with each game it came as no surprise when the news came that he’d lost his job in February 1977. During his time as manager, Joe did sign such as Tony Morley and Terry Cochrane, two players who would go on to make profits for the club. He also brought back Harry Potts as chief scout. The signing of Morley was not without speculation. It was reported that he knew nothing about it, that Lord had signed him on the recommendations of Tom Finney with Brown first introduced to him when Morley turned up for training.

When relieved of his first team duties Joe was offered another job at the club but he decided not to accept it and said his farewells. He moved on to Manchester United where he worked within the youth set up for a good number of years before retiring. He played a significant part in bringing together United’s Class of 92 and he was very much admired by Sir Alex Ferguson.

Despite moving to Manchester United, he and his wife Connie continued to live in Burnley. Joe died at the age of 85 on 30th October 2014. He had been ill for some considerable time and the last few occasions I saw him it was very sad to see him in such poor health. There were glowing tributes paid to him by both David Beckham and Ferguson. From Burnley, Waldron said he thought Joe was caught between a rock and a hard place when he was given the manager’s job. His former youth team captain Docherty said of him: “He always had a smile on his face, was always keen and excited, and along with Jimmy Adamson they combined to form a brilliant youth team with many going on to play in the first team and other Football League clubs.”

Looking back, it was probably not the best of days for either Burnley Football Club or Joe when he was appointed manager but it was certainly a very bad day for the club when he opted not to take up any new role which allowed him to move on.