Following our relegation from the First Division in 1970/71, John Angus played the first two games of the 1971/72 season for Burnley, taking his total of league appearances for the Clarets to 439, a post war record he jointly shares with Jimmy McIlroy. 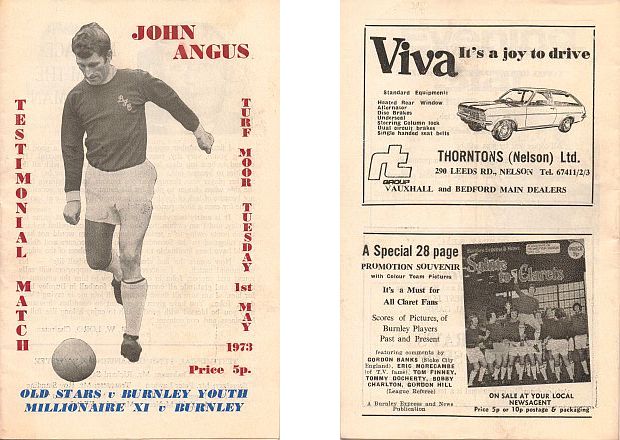 He suffered an injury in the second of those games in the second game. For weeks and weeks we were told he was a doubt for the next match but the injury ruled him out of the side for the remainder of the season and, unlikely to regain fitness, he announced his retirement with the  club offering him a testimonial. He could not have known at the time that the game would be played at Turf Moor just three days after Burnley had clinched the Second Division title.

It proved to be something of a special night that saw two games played as well as the presentation of the Second Division Trophy to captain Martin Dobson from Football League president Mr Len Shipman. It all lived up to all expectations and provided a fitting farewell for Burnley’s long serving full back, the last of the 1959/60 championship team to bow out as a player at Turf Moor.

All the ingredients were there to make it a great night and 16,059, more than 2,000 over the average attendance in the league, were there to witness it all. The opening match saw the youth team take on a team of veterans and what a line up the youngsters faced. Manager Jimmy Adamson and coach Brian Miller joined Angus in the veterans team alongside the brilliant Jimmy McIlroy whose appearance brought some supporters back to the ground for the first time in a decade. He brought the house down when he took the ball into the corner as he so often did towards the end of games when we were holding a lead. Alongside those former Clarets was Tom Finney, a guest player for the veterans team, giving me my first and only ever opportunity to see the former Preston plumber play. My dad said was the best player he ever saw and Jimmy Mac once told me that he was so good you could have played him in goal and he’d still have been the best player on the pitch.

The main match saw the first team beat a Millionaire XI 4-3, the opposition coming from ex-Burnley players still playing in league football. One of them, Ralph Coates, had played the night before and would play the night after for Spurs, in games against Wolves and Sheffield United, but he was determined to be there. Adamson confirmed that of 26 players invited to take part only Brian O’Neil was unable to be there and that was because of illness. “Everything worked out very well,” said Adamson. “We were all pleased for John, he’s deserved it.” Chairman Mr Bob Lord added: “Tonight we have seen the way the Burnley public feel about John Angus. I am sure that everyone is delighted particularly in view of the attendance .”

The season wasn’t quite over for Burnley. On the following night the same players travelled to Burnden Park to play Third Division Champions Bolton in a testimonial for their long serving captain Warwick Rimmer. An attendance of 13,314 saw Geoff Nulty give Burnley the lead before Bolton, who included Colin Waldron’s brother Alan and a centre half by the name of Sam Allardyce, came back with three goals including one from substitute Neil Whatmore, who some years later briefly played for Burnley, to win 3-1. 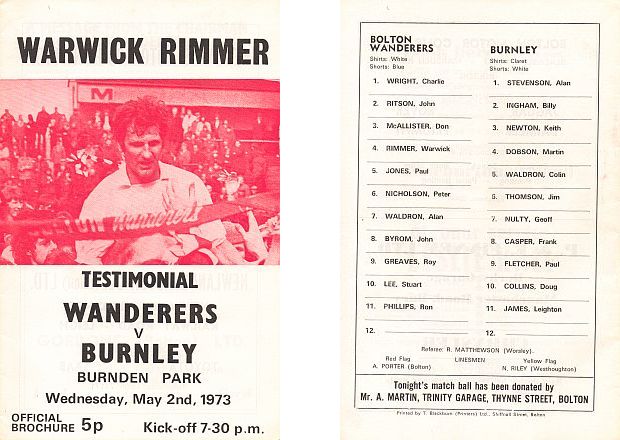 That did bring the curtain down on the 1972/73 season. A season that we hardly wanted to end had finally done so but it left us with so many wonderful memories and, importantly, a return to the First Division that we so wanted.

We will report news of the trophy presentation and the players’ party that was invaded by long haired louts in a couple of weeks time but Tuesday, 1st May 1973 though was very much a night for Cool John Angus whose testimonial raised around £5,000.