Just a week ago today I wrote of our 3-2 win against Mansfield in a fourth division game played thirty years earlier, a game that saw us beat the league leaders 3-2 at home with our captain John Pender scoring the winning goal.

Clive Tyldseley, on the Burnley Are Back video described Pender as Captain Fantastic but at the time I was writing I had absolutely no idea of the former captain’s health issues. Back in April 2018, I learned that a good friend of mine Alan Beecroft had been diagnosed with motor neurone disease and just months later came news that Lenny Johnrose had been diagnosed with this same illness. 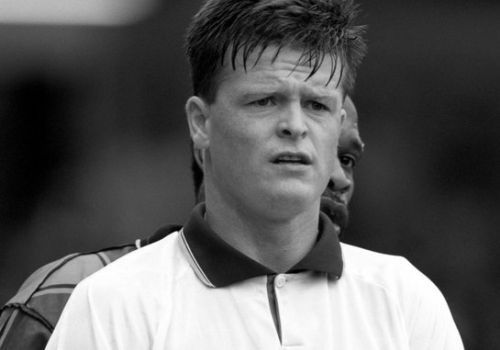 Alan passed away almost 22 months ago now; Lenny is still with us, still defying the odds with his wonderful sense of humour, but the news came that Pender was also a sufferer and is now confined to a wheelchair.

The first time I can recall seeing him play was for Wolves at Easter 1983 on the day they beat us 1-0 when the snow came down in the second half. He moved from there to Charlton and then Bristol City before Frank Casper brought him to Burnley early in the 1990/91 season. Initially it was a loan, but it was soon made permanent for a £70,000 and he partnered Steve Davis in the centre of defence as we reached the play-offs.

It was alongside the second Steve Davis that Pender and Burnley then flourished with two promotions two years apart. Firstly, there was the fourth division title in 1992 and two years later he became the first, and only, winning Burnley captain to lead us up the old Wembley steps to the Royal Box to receive a winners trophy when we beat Stockport in the play-off final. He remains, alongside Martin Dobson, as one of the two players who have captained us to two promotions.

Strangely, he was one of the players quickly discarded by Jimmy Mullen. He made just five appearances during the following season and early in the 1995/96 season, having made two appearances, he was sold to Wigan for £40,000. He’d played 222 league and cup games for us and that goal against Mansfield thirty years ago last week was the second of the eleven he scored for us. His final game for us was also against Mansfield in the League Cup.

There would be one more move after Wigan, to Rochdale, but his career came to an end on Valentine’s Day 1998 when an injury forced him off early in a 2-0 defeat at Scunthorpe on a day when his former Burnley team mates Andy Farrell, Robbie Painter and Graham Lancashire all featured for Rochdale.

Later today we’ll have our latest feature from the 1991/92 season when, on this day thirty years ago, Pender led us into FA Cup action for the first time. It seemed the appropriate time to write about him and his current situation.

Our thoughts and best wishes are with John, his wife Denise and the Pender family as they continue their fight against this dreadful disease.