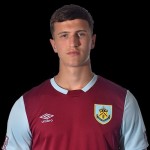 Cropper moved to Chesterfield last January and played eight games for them in the league before the season came to an end in March but then returned ahead of the new season on loan for the entire season.

There is usually a break in January when a loan player can be recalled and Burnley have taken that option after he’d added another twelve appearances for the Spireites, the last of which came last month in a 6-0 home win against Barnet.