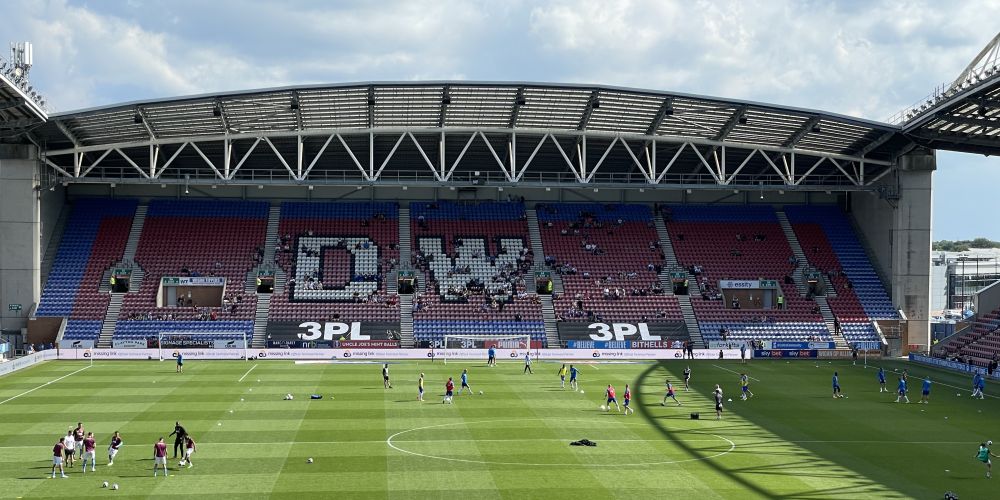 Wigan Athletic treated us to Just Can’t Get Enough by the brilliant Depeche Mode before the game and the Burnley fans gave us a wonderful rendition of the equally superb Human League’s Don’t You Want Me in tribute to Nathan Tella on an afternoon that was music to the ears of those Burnley fans who saw us go to the concrete jungle that is the DW Stadium and come home with all three points from a 5-1 win.

It’s been a while coming. It’s 39 seasons since we first played at Wigan, losing 1-0 at Springfield Park on a day when our manager John Bond decided to take on some idiots who ran onto the pitch. Before yesterday, be it there or the new ground, we’d failed to win and only John Deary, Glen Little and Andy Payton had managed to score league goals for us.

No journey to an away game seems to be without some issues and yesterday was no exception given it took in the route through Cliviger on the way to pick me up. That proved to be the only delay and the short journey was completed very quickly via a hastily arranged stop on the way. We parked up at B&Q and made the short walk to the ground in weather much more suitable for what was going on at Old Trafford, the real Old Trafford that it is where the phenomenal James Anderson was helping steer England to victory against South Africa.

Embed from Getty Images
The team news was a bit of a surprise when it came through. We knew there would have to be one change at least and I predicted that Darko Churlinov for the suspended Ian Maatsen could be the only change from the team that drew with Blackpool. There was just one change but it saw Jóhann Berg Guðmundsson come in for his first league start since the first game of the year at Leeds. He more than played his part for over an hour and what a terrific addition he will be to this squad if we can keep him fit.

Wigan made their intentions clear from the off. With only seconds gone, they took out Jay Rodriguez down the right. Referee James Bell, who at times had a strange afternoon, got this absolutely right. He saw an advantage and allowed play to continue but then went back to yellow card Curtis Tilt.

Overall, we started well and looked the more likely without really creating much in terms of goalscoring opportunities, but that changed just past the quarter of an hour when Vitinho, who I thought had an outstanding game on the left hand side, got in a cross. It reached Guðmundsson just beyond the penalty spot to the right but Wigan’s James McClean got a touch. It did him no good; the ball dropped for Jay Rod who hammered home from around eight yards out.

It was just what we wanted and it led to a period when it really was virtually all Burnley and it really was no surprise when we doubled our advantage and it came from that same source on the left. This time Vitinho had a little bit more to do. He skipped past Max Power and then Tendayi Darikwa before pulling back a low ball that Josh Brownhill smashed into the net from almost the same position that Jay had scored.

Embed from Getty Images
At this point, we’d seen little of Wigan but as the half started to draw to a close, so they came back into it and as we started to look at the clock for half time, they played a hopeful ball forward. Callum Lang got there as Arijanet Muric raced out. Lang got to the ball and tried to hit a shot over Muric before the goalkeeper got there and got to Lang. Again, well done to the referee who watched the shot bounce before missing the target which prompted him to point to the penalty spot. Up stepped Will Keane to hit home the spot kick although Muric did get a touch to it. It gave the home side a real lift as they had another shot at goal just before half time and then really should have equalised right at the start of the second half only for Keane to miss target.

We needed to settle things down at least and we did just that as we went into a period where the officials took over with some bizarre decisions. I thought we could do with another goal, and we got one, courtesy of Tella who was played in by Brownhill. He finished so, so well but quite how on earth the assistant missed the clear offside only he will know. That would definitely not have been a goal in the Premier League; here it was and it was 3-1.

Twice then we should have had penalties, both of which were missed by Bell. The first was Darikwa on Tella and it led to a lengthy stoppage for Darikwa to receive treatment. It looked like a shoulder injury and he was to play no further part against his former club.

Soon afterwards, Guðmundsson was brought down by Tom Naylor and again, incredibly, no penalty award. JBG looked bemused, and no surprise. It did prove to be his last action of the afternoon with Darko Churlinov coming on for him. He’d played well, he really had, and showed us just what we have missed during his horrendous run of injuries.

Embed from Getty Images
Wigan substitute Josh Magennis forced Muric into a save, tipping the ball over the bar, and it has to be said that the misjudgement for the penalty really was the goalkeeper’s only mistake.

This really was always going to be Burnley’s day though and two late goals rubbed it in for Wigan. Samuel Bastien, one of our substitutes, played his part in both of them. For goal number four, he played a ball out to the right for Brownhill who moved forward and came inside a defender before hitting a left footer into the bottom corner. On a day when Will Grigg scored twice for MK in League One, I was half expecting their fans to start singing Brownhill’s On Fire but, by then, most of the sparse home crowd had departed.

Bastien was to get his own name on the scoresheet with a strike from the left of goal having been slipped in by Jack Cork. It proved to be our last goal and the last goal of the game but what a game it had been for us and what a result.

The players came over, Tella gave his shirt to someone and Kompany came over the applaud the fans before we all finally left the ground to find a line of jobsworth stewards blocking our walk back to the car. They were preventing us from walking down past another stand with no one else in sight. One Wigan based Claret did break through their cordon with a few choice words (a member of this site’s message board too, I have to say), but we got back soon enough before making the journey home.

Embed from Getty Images
It’s over sixty years since my dad took me to my first away game but in all the time I’ve been going, I’ve only seen us score five goals or more league goals in a game away on five occasions. One of those was the six at Wrexham and one other ended in one of the most ridiculous defeats ever at Grimsby almost twenty years ago.

Like everyone there, I’ll savour this one. Vincent Kompany promised us goals and finally we delivered. I had a few concerns after their penalty but we’d played really well for the first half an hour and, after that early missed chance, I thought we were outstanding in the second half.

I felt like the one on fire, rather than Brownhill, in that heat yesterday, but I’m sure I speak for all Clarets when I suggest we Just Can’t Get Enough when we play like that.