Burnley came close to winning a first away point of the 1997/98 season at Brentford but fell to another defeat when the Bees scored a winner close to the end of the game to condemn us to a 2-1 defeat.

There were some concerns over children being approached by potential abductors and schools were now warning their pupils of the dangers of speaking to strangers. They were all given the ‘Stranger Danger’ talks while police were set to launch ‘The Never Never Club’ while also appealing to the public to help find the culprits. 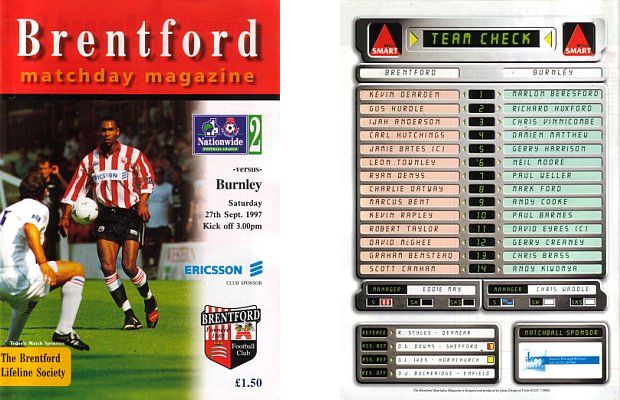 Mr John Fairbrother, head of Ightenhill County Primary School, said: “It’s worrying. You occasionally have isolated incidents but when there are reports of four in the immediate area of school you have got to be worried and vigilant.”

Workers at Lord’s Printers in Burnley continued to be worried over their futures at the troubled company. Around fifty employees had taken legal advice as the future of the Trafalgar Street business remained unclear. “It’s putting us in a very difficult situation,” said Mr Geoff Allen, the union leader. “The management won’t tell us anything. We are not able to talk directly to them. It is a bad situation.”

Councillor Harry Brooks was in the news. He had refused to appear before an investigation into council house allocations. The council’s chief executive Mr Roger Ellis had asked all members of the authority to give evidence to an internal inquiry in the wake of two councillors having been suspended. Brooks refused, claiming it was a waste of resources that was impossible to justify.

He also had plenty to say when the council was asked to approve a new post of support officer which carried an annual salary of £18,300. Brooks said it was a rip off and was being put in place for no other reason than to further Councillor Kath Reade’s political career. On this one, he scored a victory, with the new post not being approved.

A decision was set to be made on the future of Burnley’s day hospital for the elderly with health bosses proposing to close the centre at Burnley General Hospital. It had caused an outcry with councillors, patients, the Health Council watchdog and local MP Peter Pike all asking for the decision to be reversed. Mr David Chew, chief executive of the health trust, claimed the decision had been taken as part of an all-round review and was not a cost cutting exercise.

When I was at school, we had lessons in subjects such as maths, English, geography and the likes but pupils at Habergham High School were raiding dustbins for items to add to new fashion items to prepare for the 21st century. They made up the new collection with old net curtains, bottle tops and coat hangers. To be honest, I think they should have stuck to the traditional subjects.

There were problems at Burnley Magistrates’ Court because Group 4, the security firm, didn’t have enough staff to bring defendants up from custody. Described as a shambles, a number of cases had to be put back and one of the three courts was closed entirely. One of the court clerks phoned a Group 4 manager who told him: “Get a crew in from Wrexham.” It was resolved to investigate a potential change in security company.

Lancashire County Council’s plans to close Burnley and Pendle’s education offices had been leaked. Such a decision would force parents to travel to Accrington to discuss their child’s schooling. It was a decision that didn’t go down well. Councillor Marcus Johnstone blasted the county council and accused it of being run like the Third Reich. “It’s a bunker mentality,” he said. “They have seen Blackburn and Blackpool pull out and rather than asked why, decided everyone must stay. We must send them the message, decentralise or die.” He added: “Only one authority is satisfied and that’s Preston where County Hall is.”

A major row had broken out between four shop owners and the borough council over a dilapidated balcony. The shopkeepers had been told they must foot a share of the bill to replace the century old balcony behind their Keirby Walk premises but were far from happy with them expected to have to find £5,000 each.

Mr Ian Bulcock, owner of The Shaver Centre claimed: “They are putting the onus on the present tenants when most of the dilapidation has taken place over a hundred years.” Another of the four, postmistress Mrs Ina Bourke, was more to the point. She said: “The only people who use the balcony are burglars and people going to the toilet.”

There was a letter in the Burnley Express on the Friday of that week from a supporter somewhat critical of the way the season had started, but he was blaming the directors and not the manager or the players. The letter had been written by a Mr Albert Cunliffe although I’m assured it was not the man of the same name who became a celebrity among Burnley fans in the 1980s.

I don’t know whether this particular Albert Cunliffe made the trip to Brentford but we had strengthened our squad ahead of the game. Neil Moore had definitely impressed in his early games and he’d signed a two-year deal to replace his month-to-month contract. We’d also signed young Australian Mark Robertson after a successful trial.

Manager Chris Waddle had some good news ahead of the game with all of Paul Barnes, Mark Ford, Michael Williams and Lee Howey expected to be available after injury but it was thought that the influential Steve Blatherwick and Gerry Harrison could still be out for up to another month.

Waddle said of the injury situation: “I have never known anything like it. It must be some jinx I have brought with me, but we keep going. Our performances have been encouraging and we have shown some commitment. You will always get doubters, but I feel there will be an end product to our play.”

This was another day when Burnley deserved much, much more yet again came home with nothing as Brentford scored their winning goal in the 89th minute to give them this 2-1 victory. Edward Lee, from the Burnley Express, wrote: “On a day when little went right for the Clarets, they played, at times, some quite beautiful football. Brentford should have been luck to scrape home with a draw. We saw the best performance so far from player-boss Chris Waddle. We saw some delightful passing and awareness from loan signing Gerry Creaney, and we saw the best yet from goal hero Mark Ford.”

Howey, Ford and Barnes made it but Andy Cooke was ruled out. The big news was the surprise inclusion of Harrison who had defied the odds to be available after suffering his injury at Stoke. Harrison lined up in midfield alongside Ford with the manager and David Eyres on the flanks but the new look side didn’t get off to the best of starts. In only the second minute, Robert Taylor, who would make a name for himself in the following season playing for Gillingham at Turf Moor, hit a deep cross to the far post. Ryan Denys knocked the ball down for Carl HUTCHINGS to score although Marlon Beresford was unfortunate having got a hand to it.

We were so close to levelling twice in the next few minutes and both times the opportunities came from Waddle crosses. The first saw goalkeeper Kevin Dearden save well from Howey and then Moore was denied when Jamie Bates blocked his header on the line.

Eyres came close, as did Creaney, but Brentford gave us a warning when Taylor headed a Marcus Bent cross wide. It was Burnley very much in the ascendancy for much of the first half but we went in a goal behind.

Then, just before the hour, we scored the equaliser our play had so richly deserved. Creaney flicked an Eyres’ cross over his shoulder and it dropped for FORD who scored from around eight yards. Now we had to look to try and win the game.

We did everything but score but then, in a rare break, Bent broke for Brentford with only Howey able to do much about it. Bent was quicker than Howey, and that led to the defender bringing down the Brentford forward. Referee Rob Styles didn’t just give the free kick, he sent off Howey to leave Burnley to finish the final quarter of an hour of the game with ten men.

There was no argument with the decision but when the next big decision came, Styles missed it. Waddle hit over a cross for Creaney, but Brentford’s Hutchings palmed it away for the clearest of penalties. Astonishingly, nothing was given.

We were almost there for a first away point but Gus Hurdle hurled a throw into our box. Taylor flicked it on and Kevin RAPLEY hooked it into the net. It was a heart breaking and soul-destroying end to a game in which we had been by some distance the better team.

There were new leaders in the league. Watford were held at home to York and that gave Northampton, winners against Millwall, the chance to take top spot with a superior goal difference to Watford.

Burnley remained bottom and were now six points from safety. Plymouth’s win against Walsall, their first victory of the season, left us as the only team with a zero in the wins column. Plymouth, Walsall and Luton were the three other teams in the drop zone.

It was a quite day for goals from former or future Clarets; Tony Ellis for Blackpool was the only scorer.