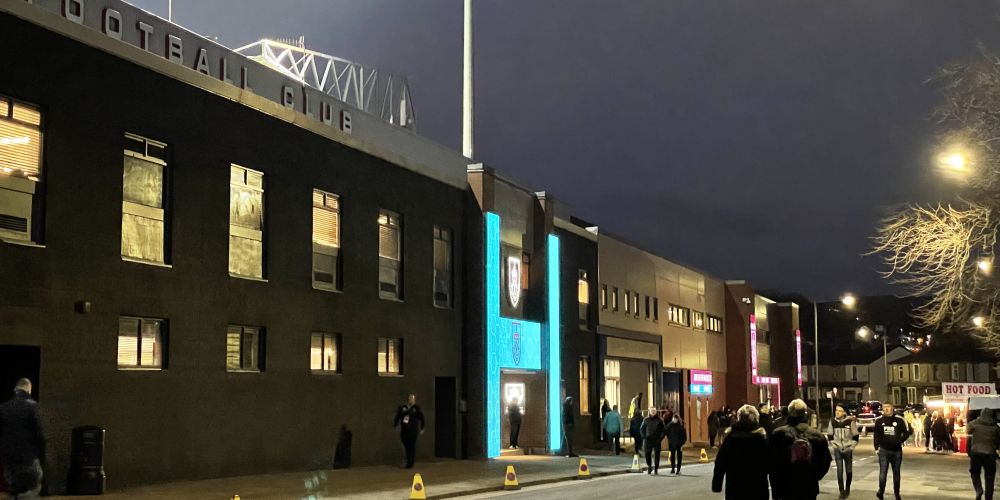 We went into the last ten minutes last night with hopes growing that we might be able to pick up a point against Leicester City with a 0-0 draw, but it wasn’t to be with Leicester scoring twice through their two substitutes and inflict on us our heaviest home defeat of the season.

Overall, I don’t think we can have too many complaints at the result. Leicester were the better team, fully deserved the points, and could well have had the game wrapped up in the first half but for Nick Pope making three outstanding saves.

It was all a bit strange last night – no rain, no wind. Fair enough, it was on the cold side, but it was a pleasant experience to actually get inside Turf Moor without having got wet on the way there. It was like the old days too, when you could chat to the people around you without being disturbed by the public address system.

Sean Dyche had made three changes from the team that had drawn at Crystal Palace. We knew that Erik Pieters was ruled out and it was fortunate that it coincided with Charlie Taylor’s return to fitness. Jack Cork and Jay Rodriguez were both relegated to the bench to allow returns for Ashley Westwood and Maxwel Cornet, with Cornet partnering Wout Weghorst up front.

Embed from Getty Images
For much of the first half it was a case of Nick Pope keeping Leicester at bay while we watched the progress of Ben Mee who suffered an injury and continued, through two unnecessary challenges, almost to half time before finally having to withdraw.

Pope made three simply outstanding saves. I’m not sure which of them you would choose as the best of the three but I thought the one to deny Harvey Barnes with his right arm was probably the best of the lot. I’m not quite sure how he kept that out.

Captain Mee went down with an injury following a challenge with Patson Daka. He returned to the pitch after treatment but never really looked comfortable and, to make it worse, was twice fouled by Daka unnecessarily, the striker clearly aware that our skipper was carrying an injury which he finally succumbed to five minutes before the break with Nathan Collins coming on as a substitute.

It wasn’t all Leicester, not by any means, and we did have a little spell during the half when we did get the ball in the net. Inevitably, Aaron Lennon was involved. He was our one outstanding outfield player on the night. He got into the box on the right hand side for Cornet to turn it in at the far post only for the offside flag to go up. There was a wait while VAR checked it and, rightly to be fair, confirmed that the assistant referee had indeed flagged correctly.

Embed from Getty Images
That was a surprise given the decisions on the night from the officials. Referee Chris Kavanagh had been in the spotlight having failed to award Everton a penalty last Saturday against Manchester City while on VAR duty. It wasn’t Kavanagh’s first horrendous VAR decision this season and this time his boss Mike Riley actually apologised to Everton for the error. Quite why he was then allowed to take this match only PGMOL will know. He was like a rabbit caught in the headlights and I can’t recall a referee making so many mistakes in a match although thankfully none were really match defining mistakes in terms of the result.

We reached half time level with the scores level and with the hope that things would improve after the break. I’m not sure they did, but Leicester didn’t, for the most part, really threaten although they did look the most likely.

With nineteen minutes remaining, Rodriguez replaced the disappointing Cornet but, significantly, Leicester made a double change a minute later with Youri Tielemans and Daka replaced by James Maddison and Jamie Vardy, the latter returning from an injury that had kept him out since December. Ten minutes later, they had done the damage and we were heading for a defeat.

As the clock ticked past eighty minutes, and with the scores still level, there was every chance we might get a draw and I’m not sure any Burnley fan wouldn’t have grabbed that point given the way things had gone.

This time there was no penalty, but a back pass from our target last summer Marc Albrighton. Jay Rod chased it down against Kasper Schmeichel. It was close; had Jay got their first we would probably have gone 1-0 up but Schmeichel just beat him to it and cleared the ball up pitch. Vardy latched onto it, brought the ball under control and laid it off to fellow sub Maddison who moved a couple of steps forward before firing a left shot into the bottom corner from the edge of the D.

We had forced Schmeichel into one save earlier in the half when he denied Connor Roberts but we did get a big chance to equalise from a left wing corner. Collins flicked it on towards the far post but Wout Weghorst couldn’t find the target.

And to make things worse, in the final minute of normal time, Leicester wrapped things up with a second and inevitably through Vardy who headed home a left wing cross from close range. It was his seventh goal against us; the sixth in the Premier League and he’s now just two goals short of reaching 150 league goals for Leicester and he’s still five games short of having started 300. And people scoffed at them paying £1 million for a non-league striker back in 2012.

Embed from Getty Images
That was it. Even before the board went up, the ground was emptying quicker than a fire drill which did make it easier for those leaving at the final whistle. With so many having gone, thankfully there were smaller numbers having to negotiate their way out from the Longside towards Belvedere Road. Someone is going to be seriously injured or worse soon if nothing is done. We had done something this time; we’d managed to allow two cars to be left parked on Ormerod Yard. I can’t imagine just how big a problem that would have been had everyone been leaving at the same time.

While ranting about issues outside the ground, there was a major hazard on the club shop corner with a piece of the road missing, forcing people to actually take a step up as they crossed the road. I saw two people fall, and one of them needed assistance from stewards to get to his feet.

I’m aware that this was outside the club’s footprint but for a Premier League game to be going ahead with a hazard like that outside the ground, with no warning signs or anything, is downright appalling. I can confirm that there was a minor road closure yesterday while workmen repaired the damage.

But on the field, it was a disappointing night which brought our heaviest home defeat of the season on a night when any sort of result would have seen us climb out of the bottom three.