Having beaten Blackpool and drawn with Middlesbrough at home, Burnley were back on the road on this day in 1972 and came home with yet another point, this time from a 2-2 draw at Kenilworth Road against Luton Town. 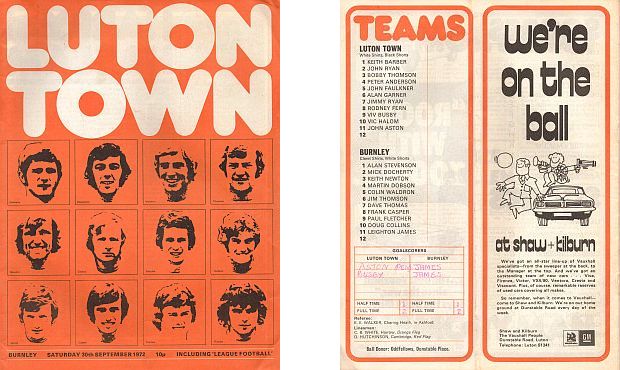 There was something of a rumpus over the water rates in the very week when engineer and manager of Calder Water Board, Mr S. P. Lord, revealed that water supplies were better than for many years following the levels of rainfall over the summer of 1972. The rumpus came when 47 objectors won themselves a public enquiry over the water board’s bid to raise the maximum water rate charge. Mr Joseph O’Keefe, Clerk & Treasurer of the Board of Calder Water Board revealed: “Nearly all of the 47 objections are from private householders and some are from pensioners. Unfortunately, we have to apply the increase in proportion to the rateable value of property in accordance with the Water Act 1945.” What he didn’t say was that they were planning to raise the water rates from 25p in the £ to 32p in the £, an increase somewhat considerably higher than expected.

The area just outside Turf Moor was changing and it was all too much for one lady, Mrs Mary Anne O’Brien who lived in Anne Street which ran parallel to Brunshaw Road from the corner of the Park View public house to Todmorden Road. Mrs O’Brien was 75 and was known as ‘Grandma O’Brien’ to all the residents, most of whom had already departed with the street to be demolished. She was refusing to move having lived there for over 60 years because attempts were being made to move her to an different area of town. “I want to stay in this area,” she said. “All my friends live here. My daughter brings my meals every day. If I moved out of the district, I could not expect her to bring them on the bus.”

She was one of only two residents remaining and added: “About two weeks ago my water supply was cut off. Workmen came up and put me a tank in the back yard. When I want water I have to go into the yard and fill pans or bowls. Because I am old, I keep falling.” Vowing to remain, a council spokesman explained: “We try to meet people’s requirements as far as possible. This is a sad affair and we feel very sorry for the woman. Even though we are aware of the situation, we have no suitable accommodation in the area where she wants to live.”

One local man had a solution to save him some money. He’d found himself in court where he pleaded guilty to assaulting his wife and causing her actual bodily harm. He’d given her a black eye and a grazed face. He was fined £5 by the court where he said it had all been down to marital trouble. He explained that to avoid any further such fines he had moved out and he was now living apart from his wife.

There was no such easy solution for one 18-year-old woman who was remanded in custody having stolen a radio valued at £10. She’d stolen it from her own father who had shopped her to the police. I suppose, at least, he’d got a troublesome teenager out of the house for a while. Another Burnley man, also aged 18 like the radio thief, was sentenced to six months at a detention centre for having no flight in one of his darts. With no flight he was hardly like to get one hundred and eighty but he was ready to use it when he started fighting with a rival supporter at the Lincoln v Burnley Watney Cup game in July. There was no Burnley FC safety officer to give him a life ban from the Turf back then so maybe he’s still a regular supporter.

Even younger people were in trouble after a day of unrest at Towneley School that saw nine pupils suspended. Headmaster Mr Ernest Salisbury, who had recently replaced Mr Ignatious Redhead, confirmed that one poor prefect had been ‘knocked about’. All those banned from the school were aged between 12 and 14 and Mr Salisbury said that more will be facing suspensions after playing truant. It all started on the way back from lunch. They were throwing stones and making too much noise as well as knocking the poor prefect about. When a bench was thrown across the road, the police were called but by the time they arrived the ringleaders had truanted. The problems had started because there was no heating in the canteen due to extension work.

The crimes of the day never cease to amaze me and there was one court case where a 17-year-old was in front of the magistrates for chopping down a sycamore tree. He was fined £15, three times more than you got then for causing your wife actual bodily harm, but told the court that he’d just bought a new axe and was doing no more than trying it out. He did apologise to the court for the offence and said he’d only chopped off a few dead branches, and yet the tree was completely cut down.

Entertainment wise; Barbara Streisand and Ryan O’Neill were appearing in ‘What’s Up Doc!’ at the cinema but if you wanted live entertainment there was always Billy Fury at Bank Hall Miners or the Ukrainian Cossack Brotherhood who were topping the bill at the Cabaret Club. None of that was for me. I was on my way to Luton but only just about made it after the car I was travelling in, a Hillman Imp I’ve just had confirmed, broke down on the way and not too far on the way either. After emergency repairs it was a real rush to get to Kenilworth Road and we only got there in time for one quick pint and into the ground on the open end.

Thankfully we didn’t miss what proved to be an outstanding game of football against Luton that went one way, then the other, before ending all square at 2-2. We might have taken a first minute lead when Paul Fletcher charged down a clearance in midfield and made for goal. He’d only the goalkeeper to beat but blazed over. We didn’t have long to wait. With only three minutes gone we took the lead with something of a freak goal. Doug Collins played the ball to Leighton JAMES who was just outside the box. He hit a first time shot that goalkeeper Willie Carrick really should have saved, but it bounced in front of him and flew over his shoulder. It was a home debut for the goalkeeper, and not the sort of start he would have wanted but he did see his team equalise just 16 minutes in.

At this stage of the game we’d totally dominated proceedings and the goal came out of the blue courtesy of referee Ron Challis. who stunningly gave a penalty for handball against Collins. Alan Stevenson was given no chance from the spot by John ASTON as the score became 1-1. Soon after it was believed Challis, who had perhaps realised his mistake, levelled things up by strangely disallowing a second Luton goal for offside when Aston, the goalscorer again, had clearly received the ball from Burnley’s Jim Thomson.

Luton had the better of the play for a while but Burnley came back into it as the first half drew to a close but by then we’d made a substitution which did not go down too well with the player coming off. Everyone knew about the poor relationship between manager Jimmy Adamson and Dave Thomas but, although we didn’t know it at the time, this was the final act. Thomas, who had been in outstanding form all season, looked far from pleased when Adamson, for no obvious reason, hauled him off just past the half hour and replaced him with Geoff Nulty. He had suffered and  injury earlier but had run it off and was playing without any problem. He looked far from happy as he left the field knowing that he’d also miss the next two games because of an FA suspension.

At half time it was still 1-1 but just nine minutes after the restart we found ourselves behind and what a shocking mistake it was from Colin Waldron whose back pass to Stevenson was far too short allowing Vic HALOM to step in to give the home side the lead. Twice more we nearly conceded from woeful back passes, both from Thomson but it had been a poor feature of our play throughout the game.

For a long period in the second half there was only one team in it. But for Stevenson we’d have been beaten long before the end. He made a string of fine saves but it was hero and villain James who was to play the leading role towards the end of the game. He might have been sent off after punching Luton full back Bobby Thomson. Maybe it was the theatricals of Thomson that saved him and got him just a booking. The home fans turned on the Welshman, little knowing that it would get his back up to such an extent that he’d take revenge. He did just that. He tormented Thomson for the rest of the game. he saw two shots saved and set Nulty up but the midfielder could only hit the bar. Then, with just over a minute remaining, JAMES played his final hand, crashing in a 20-yard drive that flew into the corner and a point had been rescued.

There was just time left for some drama on the terraces. With no segregation in 1972, we’d stood with some home fans. One bloke was pleasant enough, somewhat well dressed for a football match. I have to say I was somewhat surprised when a broken bottle was pulled from his jacket at the final whistle along with quite a threat. I’m well into my 60s now, I was 20 then, and my knees weren’t quite a struggle with arthritis. Thank God I was reasonably quick. We all got away and thankfully the Hillman Imp got us home. After all, we’d a big game against Swindon a week later.

The win kept us in third place in the table but the two teams above us switched places with Aston Villa, winners against Millwall, going back to the top as Sheffield Wednesday were held to a draw at struggling Carlisle. Biggest win of the day was Sunderland’s 4-1 home victory against Nottingham Forest and in the league it was Preston who were progressing well. Since losing to Burnley at the end of August they’d had an outstanding September and had moved into fourth place. No team had won more points in the month than Preston. They had 12 points with Villa, Middlesbrough and Wednesday all winning 10. Burnley were fifth best in the month with 9 points along with Luton, and this despite us only winning two of our seven games.

« McCartan back home with Ballymena
Madley is cup referee »