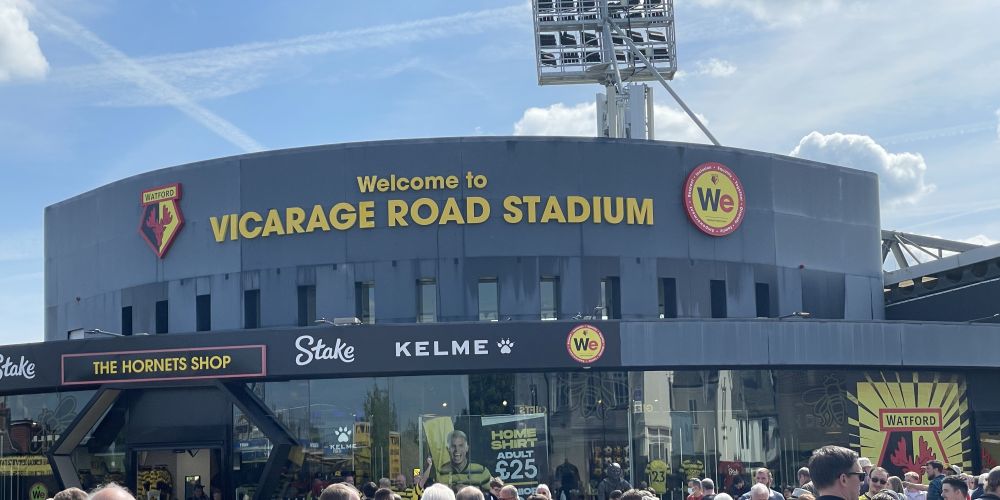 It was a dramatic late show from the Clarets at Watford with two goals from our central midfielders turning the game in our favour to give us a 2-1 win and move us up a place to sixteenth in the Premier League table.

For much of the afternoon it didn’t look as though we would get even a point from the game having falling behind in the opening minutes but those two late goals turned the whole game on its head to give us three points which, given this afternoon’s news from Goodison Park, are of such importance as we try to keep out of the bottom three.

The fixtures have been strange this season with this the closest away match scheduled after the trip to Leeds at the start of 2022. Only the previously postponed game at Aston Villa has interrupted that so at least it was a slightly later departure by car yesterday than recently, helped also by the fact that we were kicking off at 3 o’clock.

After a pickup in Nottinghamshire and a breakfast stop, we were parked up in Watford early with Clarets already in town in numbers. We even saw Glen Little making his way to Vicarage Road to watch his former club. Having spent much of the season almost expecting relegation, Burnley fans are now much more positive than for some time and the worry now is that maybe we are all getting a little over optimistic.

Embed from Getty Images
Michael Jackson had opted for one change to the team that had beaten Wolves with Aaron Lennon preferred to ex Watford striker Matěj Vydra. It would see Lennon on the left and Jay Rodriguez moved into a more central role alongside Wout Weghorst.

That’s what we thought; the teams came out and we noticed nothing but just after kick off, Vydra was spotted. He’d had to come into the team just minutes before kick off with Rodriguez having to withdraw with a hamstring problem. It caused us problems; firstly in terms of numbers, it meant Will Norris had to go on the bench to make it up to nine, and all the plans made and worked on with a Weghorst/Rodriguez partnership up front were out of the window.

How much that affected us is hard to say, but we started poorly, saw Watford take the game to us and they went in front in only the eighth minute albeit with a little good fortune as the ball came back off the bar and went in off James Tarkowski.

It was just what we didn’t want and the concern was that there was no real reaction from us. We were sloppy in possession, gave the ball away far too easily and far too often and we were probably that the opposition was a Watford side who didn’t really take advantage beyond that opening goal.

Embed from Getty Images
In an uninspiring first half as far as we were concerned, Lennon got one ball across from the left that Weghorst just couldn’t quite get to and then Dwight McNeil burst into the box, was fouled and referee Craig Pawson pointed the spot. Weghorst was set to take the penalty but after a VAR check, Stuart Attwell decided the foul was outside the box and so we won nothing more than a free kick which we wasted.

When the half time whistle blew with us still behind, we couldn’t really have any complaints at still being behind. If we were going to get anything at all from this game, then surely we would have to offer a lot more in the second half.

The second half did get off to a brighter start and both goalkeepers were called into action in the opening minutes. We had definitely stepped things up and did start, at last, to apply some pressure on the Watford goal.

Ashley Barnes was introduced on the hour and I thought that made a big difference. Watford began to look more and more concerned and, after James Tarkowski had headed over from a corner, Barnes was close to having his say when he got his head to a right wing corner. His header was goal bound but Ben Foster did really well to get a touch to it which was enough to tip it onto the board. From the far end, we thought we might have scored but pictures showed it clearly wasn’t over the line.

Embed from Getty Images
Time was beginning to run out on us. At one point, with a stoppage in play, I glanced at the clock and saw nine and a half minutes remaining. At this point, I couldn’t see an equaliser coming but it did. Charlie Taylor picked up the ball on the left touchline some thirty-five yards out. He was allowed to move forward with little resistance from any Watford player but, regardless of that, his cross was superb and found, of all players, Cork coming in at the far post to dive forward and head home.

Cork doesn’t score many goals. His last was way back in December 2018 at home against Liverpool; his last in an away game was, just like yesterday’s, at Watford as we came from a goal behind to beat them 2-1 in April 2018.

That goal was our second that day when Sam Vokes and he scored within three minutes of each other. This time it was the equaliser and none of us could have known that once again we’d score three minutes later to win the game,

Barnes won a free kick on the left. It was a clear foul. McNeil took it towards the far side of the penalty box. Watford twice half cleared it but there was no escape for them when Cork headed it back into the box. This time they could only get it down to Vydra who took one touch with his right foot before laying it back to Brownhill with his right. From inches inside the box, Brownhill stroked the ball home.

Embed from Getty Images
It was bedlam in the away end; Brownhill set off to run the full length of the pitch to celebrate with family and friends who were in the bedlam area. Other players joined him, the bench went crazy too with Phil Bardsley leading the way and it took the youngest player Nathan Collins, on his 21st birthday, to start calming things down and ushering Brownhill back to allow the game to restart.

That was it; the fans were celebrating a win even though there was still some time to play. I was, by now, more nervous than I’d been all afternoon and only when the final whistle blew did I dare celebrate.

“We are staying up,” was the chant, but there is much more work to be done before we can even believe that to be the case. Manchester City, as expected, helped us at Leeds last night; Chelsea very definitely didn’t this afternoon at Everton which puts everything back in the melting pot.

We can do no more than keep collecting as many points as we can and I’ll repeat that we’ve given ourselves a chance but no more than that. There is so much work still needs to be done and more points are still going to be needed.

Embed from Getty Images
It had, though, been a brilliant afternoon and it was now time to head for our stop which this time was in Leicestershire. We got away from Watford very quickly and the selected stop was again a success before the journey home with the three points.

We’ve still four games to play. We’ve no idea how many points we are going to need so we just need to get as many as we can. And let’s hope we can get some of our injured players back soon; they are going to be needed.

Finally, and rightly, a special mention to two people, one from each side, Watford manager Roy Hodgson and Burnley’s Tarkowski. We know Roy hasn’t been well but it was good to see he was able to be there yesterday if he was seated throughout. I’ve read reports of him having a family issue ahead of the game. We wish him and his family all the very best.