Lead reduced to one point after draw at Carlisle

Burnley had to settle for a point in a 1-1 draw at Carlisle in 1973 and that result allowed promotion rivals QPR to edge ever closer to us at the top of the Second Division.

It was a week when Alderman Thomas E. Gallagher announced that the new anti-vandalism methods, which had to remain secret, were now working. Such was the improvement  that the town’s Christmas decorations had their best season ever with breakages down to a lower level not experienced in years. Speaking to the Burnley Express, the Alderman said: “The battle’s far from won but as far as I can see it the number of incidents are dropping. The number of complaints I am getting is dropping. However, measures are not slackening. In fact, they will be made even tighter to ensure that we cut this type of behaviour down as far as is humanly possible. There is no doubt that the increasing public awareness of their responsibility in helping us to combat vandalism is helping us tremendously. The publicity given to this side of it had assisted enormously.” He added: “The public could still do much more to help to protect property, which, on many occasions, was public property, by reporting incidents quicker.” 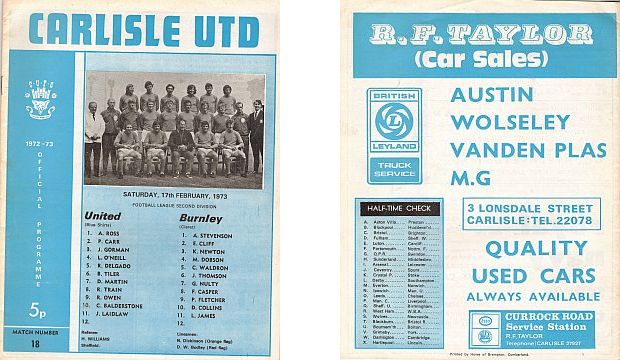 Alderman Gallagher was also set to be involved in Burnley’s first ever involvement with county council elections. With the town set to lose its County Borough status it meant, for the first time, we’d have candidates at county level. The 66-year-old Gallagher, the leader of the Labour party in Burnley, was one of five candidates in the Labour line up and he was to stand in the Lane Head and St. Andrew’s Wards. The Labour and Conservative parties would contest all five seats while the Liberal party had candidates in three of them.

Just two months earlier, in December 1972, I reported that anyone in Burnley who had been in the Home Guard during the war could be set for a windfall when Mr W. H. Barnes, chairman of the Burnley and District Royal British Legion, said a small fortune was waiting to be shared by those, and their dependents, who were in need. It brought an avalanche of applications for assistance and one old soldier even asked for enough cash to set himself up in business. Mr Barnes had clearly misled people by announcing there was a trust fund available to the value of £2,800. By February that had been scaled down to £2,500 but the big shock came when it was reported that although the capital was at that figure, only the annual income of about £125 was available for distribution with most grants for people in distress to be no higher than £5. On behalf of the trustees, Brigadier (ret) H. M. H. Ley, said: “Publicity given to the trust fund has caused people to gain a very wrong idea of the money available for grants and the trustees are even receiving applications for finance with which to start businesses.” It looked as though there was going to be some major disappointment with stupid boys told not to give their names only receiving around £2 for an assistance claim.

December had also brought sad news for me with the shock death of my football travelling friend Daz Angeli in a car crash, and now came news of the death of a former class mate from school and in very tragic circumstances. He’d been tipped over the edge when he saw his girlfriend kissing another man at a party in Newcastle-upon-Tyne where he was studying chemistry and biology. Two days later he died after taking cyanide poison.

The drunks were appearing in court during the week. One man, a 27-year-old, had been found drunk by police outside the Mecca Ballroom in Centenary Way. The magistrates showed leniency when he was in front of them for being drunk and disorderly. They gave him a two year conditional discharge after being told that he was off work and had recently been knocked down by a car. He’d only been shouting a bit but the next man to appear had taken being drunk and disorderly to another level by bashing two litter bins against a police van. One of the bins dented the nearside door and the man also managed to smash a window and break a light fitting. He pleaded guilty to the charges brought against him and the court were informed that he’d caused £13.57 of damage to the van and £4 damage to the litter bins. Just to make matters worse for him, he was wearing a stolen shirt, one of two he’d nicked just before Christmas. He was bailed for three weeks for a social enquiry report and he told the court: “I am sorry. it won’t happen again. I was in a drunken state and I didn’t know what I was doing.”

Dr. Lesley Ashworth, who had spoken out on the BBC’s Panorama programme against the poor family planning in Burnley, said she had been inundated with support for her comments. That support had come, amongst others, from both gynaecological consultants in the Burnley group of hospitals, the paediatrician and another consultant. She said: “I am delighted that my comments have shaken the council out of its apathy towards family planning,” and again she asked of them: “If officers deny that religion prevents them from giving family planning advice the support it deserves, then what does?”

Some time ago I reported that a man had stolen a bus and had then crashed it into police vehicles. It unravelled into some story when he appeared in court. The 47-year-old was a former bus driver but was also the father to 14 children. He stole the Ribble bus from the bus station in Burnley and went on a 40 mile trip in it. He was finally seen in Crawshawbooth, apparently on his way back to return the bus. A police vehicle displayed its stop sign so he would bring the bus to a halt but he didn’t. Another police car tried to stop him but he drove straight into it and then, when finally brought to a stop, he assaulted one of the police officers. He caused over £170 of damage in total and was also found to be some way over the legal limit following a blood test. Mr Coffey (defending) told the court that on the day of the offence his client had drunk more than he was used to and that had left him in a carefree mood. He’d taken the bus on a tour including visits to Bolton, Rochdale and Oldham but was returning it. The man said he was sorry for what he had done but, sorry or not, he was sent to prison for six months.

Thankfully that was one bus not taking Burnley supporters to Carlisle and one day before the game it wasn’t certain as to whether any would go with the game cast in some doubt because of snow. By Friday it was reported that there was a good chance of the game being played although the Brunton Park pitch did have a covering of snow. Carlisle United had provided the opposition on the opening day of the season and, once the return game was given the go ahead, Jimmy Adamson made the one forced change from the team that had beaten Hull with Eddie Cliff coming in for the suspended Mick Docherty. Billy Ingham continued as deputy for Paul Fletcher at centre forward.

By the final whistle we had to be satisfied, overall, with a point from a 1-1 draw but the game might well have been won but for an appalling decision from referee Harold Hackney just a couple of minutes from time when he denied Burnley a clear penalty. It was a game where Burnley had the better of the first half but Carlisle came back after the break and were themselves the better side but it was a difficult game for both teams with one half of the pitch soft and very slippery, having benefited from the sun, and the other half rock hard. Twice the conditions got the better of us as we looked certain scorers. First Jim Thomson slipped as he went to head home a Doug Collins free kick and then Frank Casper did likewise as he tried to control a ball inside the penalty box.

Even so, we should have gone in front long before we did. Martin Dobson, who was in outstanding form, fired one shot wide and then saw goalkeeper Alan Ross save another effort. Geoff Nulty shot from outside the box only for Ross to save again and Ingham headed over the bar after getting onto a cross at the near post. Carlisle’s offering was just a couple of shots from distance and a bad miss from Les O’Neill after a mistake from Colin Waldron. Then, with Hackney looking at his watch at the end of the first half we won a free kick. Again Collins was given the responsibility to take it and DOBSON came through unchallenged to throw himself full length and head the ball inches from the ground and beat Ross with his low header.

The second half was a different story. It was virtually one way traffic as Carlisle pressed for an equaliser. We were hanging on and defending for our lives. The defence played well and again Alan Stevenson was in inspired form in goal with one save from Peter Carr rated as good as the one in the FA Cup tie when he had denied Liverpool’s Peter Cormack. Only occasionally did we get out of our own half but on one occasion we might have wrapped it up only for Ingham to shoot wide after being set up by Leighton James following a run from Cliff down the right.

It was wave after wave of Carlisle attacks for the most part and with five minutes to go they got the goal their play deserved. We only half cleared an attack and that allowed Chris Balderstone to play the ball back into the penalty area along the ground. A couple of attempts to clear the ball failed and it eventually fell to Dennis MARTIN who shot high into the net from eight yards.

Then came the Ingham incident. He burst through the middle and with an excellent chance to win the extra point he was bowled over. Hackney was caught some forty yards away but blew immediately. Astonishingly he gave a free kick outside the penalty area despite Ingham having been fouled close to the penalty spot. The free kick, taken by Casper, went wide and a draw it was.

Manager Jimmy Adamson said: “We didn’t play as forcefully as we can in attack but we were only a goal up at half time and it should have been more. Even so, I was absolutely delighted to hear our praises sung by such soccer greats as Tom Finney and Ivor Broadis who had watched from the press box.”

There was no let up from QPR who gave Swindon a 5-0 pasting at Loftus Road with Stan Bowles scoring a hat trick, just the sixth in the league all season and the first from a QPR player. Sunderland were also big scorers, netting four without reply in the Wear/Tees derby against Middlesbrough. New signing Vic Halom from Luton scored on his debut for the Roker Park side.

The lead at the top over QPR was now just one point and there was no doubt that we’d have to keep on winning games to stay ahead of the West London side who were in outstanding form.