Manchester United to bring year to a close

It has been a year that started with wins at Huddersfield Town and at home against Fulham and this evening it comes to an end with the visit of Manchester United after what has been a pretty successful year for the Clarets.

We went into 2019 with 15 points from 20 games, and that total had been boosted by a win against West Ham in the final game of 2018. Our points total for the year has reached 49 from 37 Premier League games, 28 of those coming at home and 21 away.

It seems to have been either win or lose at home. We’ve won nine of our home games, lost seven with only one of them drawn. That was against Southampton and who knows what the score might have been had Anthony Taylor given us that clearest of penalties in the first half.

So to Manchester United and for starters it is about time we ended the stat that Robbie Blake was the last Burnley player to score against them at Turf Moor. We’ve since bagged five at Old Trafford but they’ve shut us out in each their last four visits to the Turf in which we’ve picked up just the one point from a 0-0 draw in 2014.

We’ve scored a good number of goals in the year but they’ve dried up a bit recently with only three scored in the last six games since the 3-0 wins against West Ham and Watford, but we have added two more clean sheets so things aren’t too bad at that end overall, other than those awful few days when Manchester City and Spurs managed nine against us.

Reflecting on 2019, he added: “It’s been a fantastic year, looking back on it. It would be a great way to finish it with a nice win against a good side.”

With us having played just two days ago, and with there having been no injury updates , it is difficult to determine what the team might be. Sean Dyche has hinted at a return for Ashley Barnes. Back in September 2018, we beat Bournemouth and Cardiff in successive games. Neither Barnes nor Chris Wood started either of those two games but the fact is we haven’t won one game since when the pair haven’t started together.

Dyche hinted that Ben Gibson could be fit to return to the squad for today, although you wouldn’t expect any changes at the back. Matěj Vydra  was out of the reckoning at Everton having become a dad while Aaron Lennon missed out on a return to Goodison because of illness.

Manchester United, if you read reports, seem to be either in good form or in crisis while manager Ole Gunnar Solskjaer is considered more than good enough or ready for the sack.

It’s more that they are no longer one of the big teams in the league. They currently sit in eighth place but once upon a time it would be unimaginable to see them 24 points behind the league leaders at the half way stage.

They are still more than capable of turning in some outstanding performances and won two days, coming from behind to beat Newcastle 4-1 although it has to be said that Newcastle’s defending didn’t even reach woeful level.

Like us, they’ve won seven games this season but only once have they won back to back games, something they’ll be trying to do today and they came against Spurs at home and Manchester City away, the latter result, even given City’s recent form, a big shock.

And, like us, they’ve won twice on the road. Their other away win was at Norwich and they have secured draws at Wolves, Southampton and Sheffield United while losing at West Ham, Newcastle, Bournemouth and most recently, in their last away game, at Watford.

Embed from Getty Images
Their two main goalscorers are Marcus Rashford and Anthony Martial. Rashford has netted 11 Premier League goals this season, four of them from the penalty spot, an Martial has scored six.

Again, there is a lack of any team news although we do know that Scott McTominay (pictured) has been ruled out with Paul Pogba, who came on as a substitute in the Newcastle win, expected to replace him.

It was August 2018. We’d just been knocked out of the Europa League qualifiers and we were still looking for our first Premier League win of the season having picked up one point from the first three games. It didn’t come here either with Romelu Lukaku scoring two first half goals to give Manchester United a 2-0 win.

On a day when we paid tribute to Jimmy McIlroy following his sad death during the previous week, we could have no arguments about the result against a United side who were better than us almost from first to last.

Sean Dyche had made three changes from the team beaten at Fulham a week earlier. Both full backs, Matt Lowton and Stephen Ward, were left out for Phil Bardsley and Charlie Taylor. Jόhann Berg Guðmundsson was ruled out with an injury and in came Dwight McNeil for a first Premier League start. I wrote of his performance that day: “I’ve been watching him play in the youth and under-23 teams for the last two to three years and been impressed with him. I thought he was terrific last Thursday against Olympiacos but this was always going to be a big test for him. It was one that, in my view, on a difficult day for us, he passed with flying colours.” 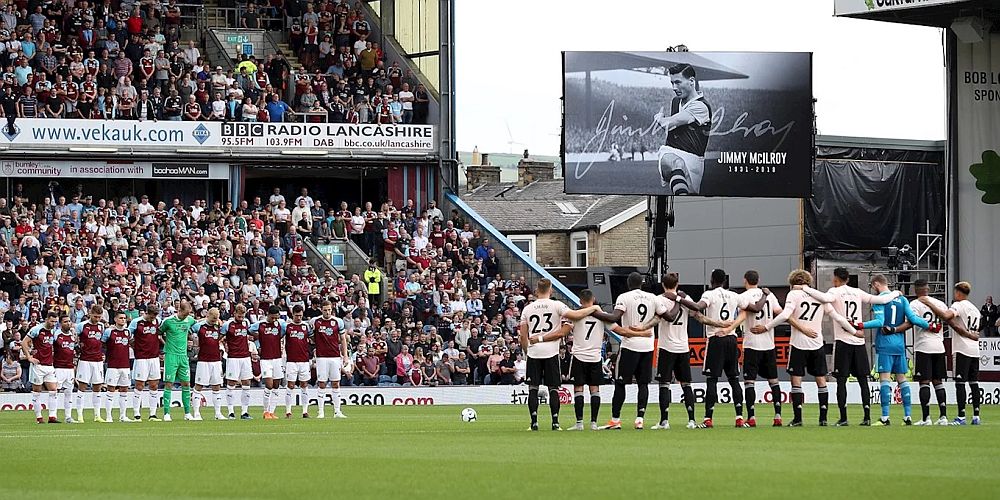 We did improve in the second half but Paul Pogba saw his ridiculous penalty saved by Joe Hart right in front of the United fans who had been chanting City Reject at him for much of the second half.

But at the end of the day, we could have no complaints at all over this result.