Marc Iles, who writes for the Bolton News, has revealed today that former Bolton and Burnley defender Mark Winstanley is winning his battle against leukaemia having received a life saving bone marrow transplant.

Winstanley told Iles that he first noticed a problem in 2018 when he was suffering with a bad back and headaches while working for Dunscar Timber in Bolton, and he was finding it difficult to sleep. He was diagnosed during that summer. His initial rehab for the back problem brought about palpitations after which he had blood tests which revealed the problem. 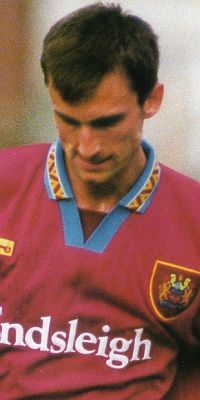 He told Iles: “I got brought in on the Monday and had a test at 9.15am and by about 5.45pm I was told to go in overnight because they thought I either had diabetes or that I was anaemic. I saw my kids but then by 10.30pm they had changed my ward and I was in haematology. The doctor came over and said: ‘you’re diabetic, you have anaemia, or it could be leukaemia’, and he wandered off. I was like ‘great I’ll stay here then!’

“The next day I got moved over to Salford and they told me I was quite ill and that I needed to start the chemotherapy straight away. I had acute myeloid leukaemia and it was pretty serious.”

Having taken a trial drug, he said after starting treatment: “I was looking at it like I would football and if you get a calf injury or something, then the physio can tell you that it’ll be three weeks before you are back training again. I wanted to know.

“The weirdest thing is that all the way through it I didn’t feel terribly ill. You went there, got plugged in for the chemo, came back. You felt tired but it wasn’t something I felt threatened by, but then a specialist told me that if we hadn’t started treatment when I did, I probably had three weeks left.”

It looked good early last year and Winstanley said: “I rang the bell in January last year but I had to do monthly tests, so on World Cancer Day, which is February 4, I went back in and they said it was coming back. I needed a stem cell transplant.”

He added: “Since the bone marrow operation my results have been clear, touch wood, and the count is going in the right direction. I’m classified as high risk at the moment so I can’t go outside the house, but it’s not the end of the world. My family have been amazing through the whole thing. I owe them a lot.

“It makes you look at things in a different way and realise that some things are just not worth getting upset about.”

Winstanley signed for Burnley in the summer of 1994 following our play-off win against Stockport. He played over 180 games for us; the last of them was the infamous home defeat against York after which manager Stan Ternent told Radio Lancashire listeners that four players, and Winstanley was one, would not play for the club again.

He’s now 52 and Up the Clarets wish him well in his recovery.

Who was man of the match in the 3-3 draw against Crystal Palace?