He came, he went and he disappeared into thin air never to be heard of again in football – that was Martin Buchan who was appointed as Burnley manager following the departure of John Benson. 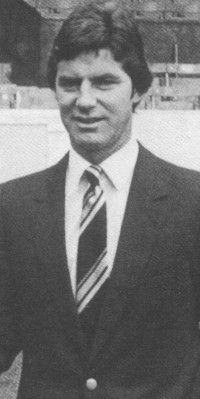 It was a strange appointment. Every indication was that Tommy Hutchison, who had won the fans over and picked up every player of the year award, would get the job. The chairman had more than hinted at it and just a few days after Benson’s departure Hutchison was in place as the ‘new manager elect’ at a dinner to commemorate the 25th anniversary of winning the League Championship.

When the shock decision came that it was Buchan, there were no fanfares, there was no press conference, it was just a snippet on the news bulletin on local radio on a Saturday afternoon and on the following Monday morning the new boss was behind his desk.

Buchan, by now aged 36, had certainly had a successful playing career. Capped 34 times by Scotland the defender had started his career with his local club Aberdeen before joining Manchester United in 1972. He spent virtually the remainder of his playing days at Old Trafford, where he captained the side, before joining Oldham at the beginning of the 1983/84 season, having been signed by Joe Royle.

He joined Burnley following the club’s relegation to the Fourth Division and some touted him as the man to take us straight back up. In reality he took us nowhere and didn’t hang around long enough to even see where we were going. Even before a ball was kicked he suffered a blow with Hutchison, hardly surprisingly, opting to leave the club. Buchan tried to tempt him with the assistant manager role but he declined and moved on to Swansea to rejoin John Bond.

Buchan still had some very good players who should have ensured we would be challenging for promotion at this level. He added to the squad and you have to say his transfer dealings were not the best. Although he signed Ray Deakin, he also brought back two players who had been on loan with us the previous season, Joe Neenan and Mark Rhodes, and if that failed to excite there was worse to come with the likes of Jim Heggarty and Brian Chippendale.

We had the advantage of starting the season with three home games. The second of them, against Stockport, should have been at Edgeley Park which wasn’t available and so it was switched to Turf Moor, By half time in the first game we were preparing for promotion. We had beaten Rochdale and Bolton 7-0 and 4-0 respectively in the Lancashire Cup in the previous week and in that opening league game, against Northampton, we were already 3-0 up at the half time whistle. By the end we were hanging on at 3-2, and then lost those next two home games, Port Vale following Stockport by taking all three points.

Results were very mixed and there were some bad performances. Even in the early part of the season it was becoming clear that a promotion challenge was very unlikely. Then, on the second Saturday in October we travelled to Sealand Road and were hammered 4-0 by a Chester side who went on to win promotion. It was a shocking performance and the first sign of discontent with Buchan was heard from the away end. As it happened we never saw or heard from him again.

Just days later, a very brief statement from the club revealed that manager Martin Buchan had resigned. He hadn’t even signed the two year contract he’d agreed. He walked out of Burnley, out of football and he never returned. His spell as Burnley manager had been just 110 days or 13 league and cup games.