It was the biggest game of the day back in 1972, and played in front of BBC’s Match of the Day cameras, as Burnley faced Sheffield Wednesday at Hillsborough, a fixture between the top two in the Second Division, and came home with a 1-0 win courtesy of a Leighton James goal. 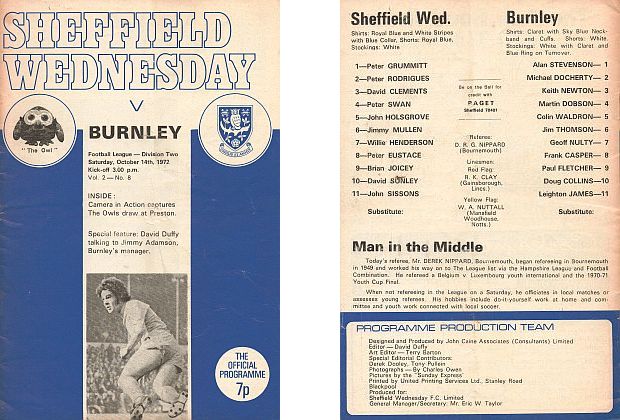 The town was rocked when one of its head teachers, Miss Rosalind Gregory, resigned at the age of 39, claiming it to be a protest against the educational system . She claimed that children were being forced to fit into the system, learning nothing about life until leaving school. “Because they have no freedom they become bored, and this is resulting in increasing vandalism,” she explained. “Two hours a day is sufficient for learning. The rest of the time they should be learning things that will equip them properly for life when they leave school.” So far, so good, I thought, but then she added: “They should learn to drive, to drink, to smoke and to know about drugs and sex. I believe that alcoholic liquor should be given to children to consume round about the age of nine. Let them get stoned out of their mind, let them know what it feels like.”

She added that, if given the opportunity, she would give the children where she worked cigarettes to smoke if they wanted them. There was much more too from this eccentric woman, but the shock came when it was reported that she was a head at a pre-school nursery. I never got to go anywhere like that aged 3-4 and I think it’s safe to say her teaching career was at an end. It gets better. Another teacher was in court on charges of possessing drugs. He also admitted stealing 19 National Health Service prescription forms valued at 5p, forging a prescription form with intent to defraud and obtaining tablets valued at 54½p. The education system was certainly thriving in 1972 wasn’t it?

House prices were soaring as one local family found out. Mr and Mrs Marsden bought a new house on Horning Crescent for £4,090 and immediately put their terraced house up for sale as their new dream home was being built. Then came the problem, the builders told them that, because of increased costs, the house was going to be £4,500 and if they didn’t complete soon they could expect further increases. Work stopped which left the poor family homeless with the couple and their three children having to live with relatives.

They were better off than one family the Halls of Padiham. There, mum, aged 62, lived with her 26-year-old son but they weren’t seeing eye to eye and had a row during which blows were struck by both sides. Less than two days later the mum died and that left the son remanded in custody charged with the unlawful killing of his mother.

The court proceedings are often worth reading and there were two reported in the Burnley Express in this week where the punishments hardly matched up. One 42-year-old woman appeared having been caught stealing a 20p pair of tights from Moneysave. She claimed that the cashier had neglected to account for them but the court dismissed her pleas and she was fined £5. Meanwhile, a motorcyclist admitted riding without due care and attention. It caused an accident in which a pedestrian died. In court, his defence said that he was not travelling too fast but did keep going hoping the lady would get out of the way. She didn’t; he hit her and she died later in hospital. He was fined £10. I’m not sure how on earth that compares with a £5 fine for nicking a pair of 20p tights.

Last week we reported that Billy Fury was set to appear at Bank Hall Miners. What a night it  was. All the advance tickets were sold and there were long queues on the night with many being turned away. At times during his performance the audience went hysterical and one woman of 23 more than once got onto the stage to get close to her idol. Over 400 were packed in to see the star who, in his pomp, had appeared at top places such as the London Palladium.

There was more entertainment to come. The Cabaret Club were headlining with Colin Crompton the settle down now star of The Comedians who went on to star as the concert secretary at The Wheeltappers and Shunters Club telling people that the wet paint sign in the gents was for information and not an instruction. There were options for film watchers. At the Odeon they were showing Red Sun starring Charles Bronson and at Studio A it was Clint Eastwood in Joe Kidd, or in Studio B you could watch Without a Stitch, the experiences of an innocent abroad.

There was news from Turf Moor during the week with the resignation of director Mr Richard Boothman, and without any suggestion of any fall out with chairman Mr Bob Lord. It was down to pressure of work and Boothman said: “It’s been a very happy time for me over the past six years, and it’s certainly very interesting work. I would have liked to have continued, but have found I could not devote the amount of time to the football club that I would like.” He added: “I am keenly interested in football and I shall always have the best interests of the club at heart.”

It left a board of five with Lord, Mr Frank Hartley, Dr Robert David Iven, Roger Hargreaves and Lord’s son-in-law Jeffrey Harrison. They, like over 1,000 fans, were travelling to Hillsborough for the biggest game of the day which brought the Match of the Day cameras to a second successive Burnley away game.

Ahead of the game, Jimmy Adamson, again without the suspended Dave Thomas, named the same team that had beaten Swindon a week earlier but with Billy Ingham taking over substitute duties from Alan West. “If we can play in the same way that we have been playing away from home we must have a chance,” said Adamson. “I haven’t had the chance to see Sheffield Wednesday this season but they have been getting some good results and must be a good side.”

It was second in the table at home against first with only goal average separating the two teams who were both on 17 points ahead of kick off. It was a strange day for me in some ways. Instead of travelling over with fellow Clarets by car, coach or train, I walked it to Hillsborough along with supporters of Everton, Newcastle, Portsmouth, Southampton, Stoke, Sunderland and West Brom. For once, being at University in Sheffield proved useful and I dragged some of my uni mates, supporters of those clubs, with me. I kept the Mag and the Mackem apart and we all had to be careful where the Pompey and Saints fans was concerned.

We made our way into the Leppins Lane End ahead of kick off. It was a big crowd, over 30,000 inside Hillsborough. I was so nervous that Burnley, my team, should put on a performance in front of my non-Burnley mates, and that’s exactly what we did.

Out came the teams with Wednesday making their way to the end where the big Burnley crowd was situated. In their team was Peter Swan who, after years of being suspended from the game over the bribes scandal, had returned. He was greeted by Burnley fans waving pound notes at him (for our younger readers, this was long before the days of the pound coin). Swan couldn’t do anything in the game to stop Burnley. It was, overall, our best performance of the season. The win took us clear at the top and told the whole league that we were the team to beat. We might have only won this game 1-0 but Wednesday were a well beaten team by the end.

We were a class above a team with a 100% home record and we never let the league’s leading goalscorers wreak the havoc that had become the norm at Hillsborough. They didn’t, in 90 minutes, force Alan Stevenson into one difficult save. The only player that caused Burnley any problems was winger Willie Henderson. There was danger when he had possession but with little support he soon faded.

Hanging on at 0-0, they had problems when goalkeeper Peter Grummitt was forced off with concussion having collided with Swan. That was ten minutes before half time and Peter Eustace had to go in goal. That led, strangely, to our quietest spell of the game. We didn’t trouble Eustace once and had to wait until Grummitt returned in the second half to get the only goal. No goalkeeper could have stopped it. Leighton James started the move in his own half and there was some neat interpassing between Keith Newton and Doug Collins as Burnley moved the ball forward. Collins played the ball inside for JAMES on the edge of the box and he let fly with a shot that left the goalkeeper helpless.

It was only in the last ten minutes that Wednesday offered much and suddenly we had some defending to do. Anything but a win would have been an injustice and it was in midfield where the game was won. Martin Dobson and Collins were at their majestic best and alongside them Geoff Nulty had an outstanding game, another fantastic box to box performance full of great heading and tackling and shrewd use of the ball. It wasn’t only midfield. The defence was outstanding, and further up the pitch Frank Casper was at his best alongside Paul Fletcher who worked so hard for the team.

As we went two points clear at the top the only disappointment was both Colin Waldron (deliberate hand ball) and Keith Newton (foul on Henderson) receiving bookings. For Newton it was a third booking of the season and he was edging close to a suspension.

Adamson must have been delighted but he played things down after the game. He said: “This was typical of our away form. It was a good solid display. We seem to be able to express ourselves better in away matches, while we feel the pressure on us at home. Now our aim must be to keep on playing like this.”

I was absolutely thrilled making my way home although, as anyone who has lived in Sheffield will know, it’s a City with very steep hills and the walk back was somewhat more difficult than the journey there. It was the Newcastle fan who turned to me on the way back and said: “You’ll walk promotion playing like that.” It left me bursting with pride.

Aston Villa, just behind us at kick off suffered a defeat at home to QPR who had now moved into third place. Down at the bottom, all of the bottom five won. It still left Cardiff in last place but with Orient, who dropped four places, joining them in the bottom two, the relegation places. The biggest win was Hull’s 5-1 success over Portsmouth, a game in which Stuart Pearson scored four times.

« Boyd out in the cold at Posh
Derek Gill passes away »