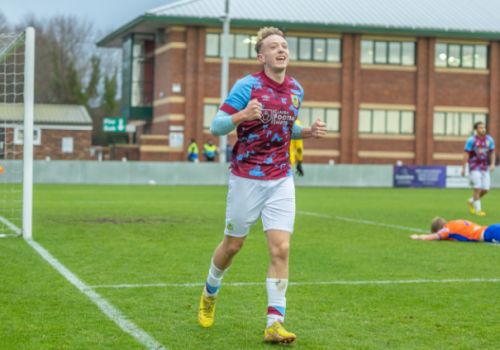 Under-21 striker Michael Mellon has today joined Morecambe on loan for the remainder of the season.

The 19-year-old son of former Claret Micky Mellon, he missed most of last season with an unreported injury but this season, he’s returned and scored eleven goals. Two of those came in September and he’s now scored nine goals in the last six games including a ha trick last Friday in the 3-3 Premier League Cup draw against Swansea.

He’s now going to get the opportunity to play first team football at Morecambe who are currently just outside of the relegation places in League One on goal difference. Managed by former Burnley player Derek Adams, they have raided us a few times in recent years for loan players, such as Adam Phillips, now at Barnsley.

One of those loan players was Ryan Cooney who is now there permanently alongside Jacob Bedeau who made the move from Burnley in the last window.

Adams said of his new capture: “We’ve taken in another striker after Kieran Phillips went back to Huddersfield, and we’re really pleased to welcome Michael here. He’s done really well at youth team level with Burnley, and with a number of clubs interested in him, we’re delighted he’s decided to come to Morecambe. He scores goals, links-up play and runs in behind and it’s a move that can hopefully work well for all parties.”

Mellon said: “I’m feeling great and I’m excited to get the chance of playing first-team football here at Morecambe. I’m here to do a job and help the manager and the team any way I can. I can come in short, spin in behind and do whatever I can to score goals. I’ve done a couple of seasons with Burnley’s U18’s and U23’s, and scored a fair few, so I’ll be looking to do the same here at Morecambe between now and the end of the season.”

We wish Michael the very best during his loan at Morecambe.