Just two days after beating York to clinch the Fourth Division title, Jimmy Mullen confirmed that six players would not be offered new deals and would be leaving Turf Moor.

This was on the eve of the re-arranged Rochdale game that once again was postponed but there were no surprises with the players released. Five of them had first team experience; the only exception was young goalkeeper Ian Walsh who had come in from Everton in the previous summer. 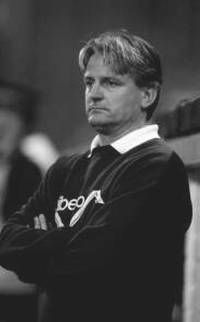 The others set to depart Turf Moor were goalkeeper Chris Pearce, defenders Ian Bray and Jason Hardy and striker Peter Mumby along with club captain and midfielder David Hamilton.

All of them had featured during the successful season but only Pearce since October. He had been in and out of the side as loan goalkeepers came and went during the season and was left out after the Easter Monday home draw against Scarborough when he was at fault with the goal.

Bray was the only other player to feature in the league for Mullen; his final game was Mullen’s third in charge against Walsall during October. Both Hardy and Mumby played for the last time in Frank Casper’s final game in charge at Scarborough with Hamilton bowing out in the previous away game at Hereford.

Mullen explained: “It’s a difficult decision to make and there’s no good time to tell a player that he will not be getting a new contract. I have got to look to the future and deciding who to keep and who to release is always one of the hardest jobs a manager has to do.

“The players I have named didn’t figure in my first team plans and I am already carrying a big staff. We have won the Fourth Division championship and we have now got to build on that success.”

Meanwhile, the directors didn’t waste any time in putting a dampener on the celebrations. Within hours of the win at York, they announced hefty price increases for the 1992/93 season. Supporters in the Bob Lord stand were to face the biggest increases with those in the Cricket Field stand and Longside terrace not far behind.

The club blamed the price increases on the need to bring the ground in line with the Justice Taylor report, something they didn’t do for some time after. Bob Lord seats were going up from £8 to £10, a 25% increase. The Cricket Field seats were going up from £6.50 to £8 (23%) and Longside terrace from £5 to £6.50 (30%) but for the first time ever it would be cheaper on the Bee Hole terrace, those prices were increasing from £5 to £6 (20%). The only good news came for senior citizens and juniors under the age of sixteen. For them, there would be no increase.

In the evening, we all set off for Rochdale again only to find that once more the game was postponed because of a waterlogged pitch. That caused problems with games having to be played by Saturday, 2nd May. Rochdale were hoping to get special approval from the Football League to play the game after the final games; it was the only option. That threw into chaos Burnley’s end of season plans with sponsors Endsleigh treating the squad to a luxury trip to Bermuda. They were due to leave on 4th May with Rochdale hoping to play the game on the following night.

« Clarets take the battle to Watford
Clarets win at Watford »