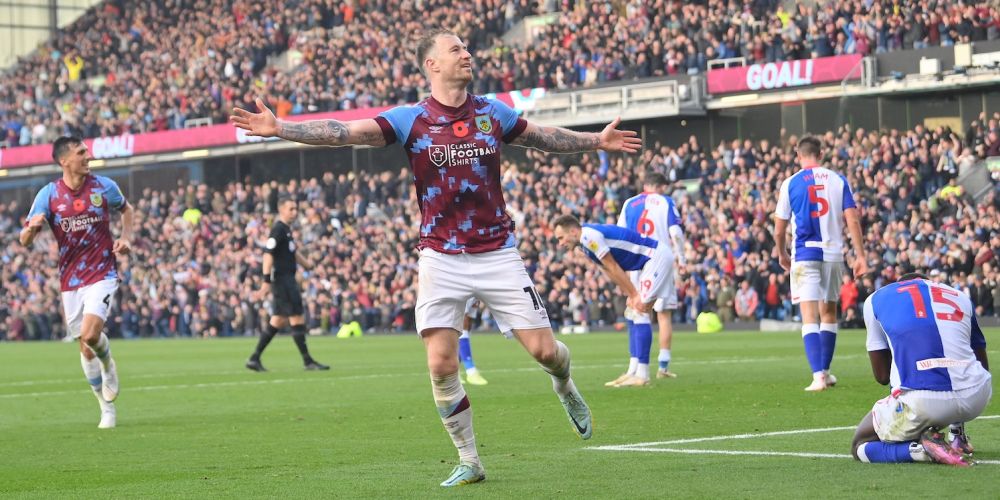 It was February 1961, the 25th of February to be exact, when my dad took me on the Turf for what was to be my first ever East Lancs derby against Blackburn Rovers.

At the time it didn’t mean anything to me but I do remember asking my dad in the week before the game if they were a good team and his answer could have been condensed into the one word of NO, although at the time, if I’d bothered to look, they were in the bottom half of the league while we sat fourth. We were reigning league champions while they’d lost the previous FA Cup final when Derek Dougan had asked for a transfer on the eve of the game and Dave Whelan broke his leg as the final was lost 3-0 against Wolves.

Embed from Getty Images
I was one of almost twenty-six and a half thousand at the Turf that day to see Brian Miller open the scoring on the hour with a diving header (shown above) at the cricket field end only for Ally MacLeod, who was to become a figure of fun years later as Scotland manager, to equalise two minutes later. It all ended 1-1 so I made the short journey home disappointed that we couldn’t beat them but I do know that my list of special goalscorers wasn’t started that day, after all a sheet of paper with Brian Miller written on it would have meant very little.

I’m not sure when the list started. When it did, It was initially written on a piece of paper but now resides online and was very recently updated. I’m delighted that ‘Dusty’ Miller is the first on the list. He’s someone I got to know so well some years later, someone I liked and someone who, like me, cared deeply about Burnley Football Club. That list is, of course, the players I’ve seen score for Burnley in the East Lancs derby.

Embed from Getty Images
Some years later, in the 1970s when Brian was on the coaching staff, I went to Blackburn for a reserve team game one midweek. I had just parked up and there he was outside the ground on Nuttall Street. “Have you got a ticket Tony?” he asked me. I told him I hadn’t and he said to wait. Off he went and returned with a pile of tickets and asked me to give them out to any other Burnley fans who arrived, telling me that he didn’t want Burnley fans having to pay. If anyone needed to ask whether he was a genuine Claret.

Exactly one year after my 1961 initiation, we travelled, me and my dad, to Ewood Park for what was to be my first ever away game. Ray Pointer gave us a first half lead but they came back to beat us 2-1. What a heart breaking start to watching the Clarets playing away from home although I think it’s fair to say things have now been put right. In my fifteen visits to Ewood since in league and cup, I’ve witnessed eight wins and just four more defeats, three of those losses coming when they were throwing money at it.

Embed from Getty Images
I’ve only missed one derby since that 1961 debut. It was the away game in the 1964/65 season and what a disappointing one to miss, a 4-1 win with goals from Willie Irvine (2), Alex Elder and Brian O’Neil. Irvine does feature on my list but I can only send apologies to Alex and the Bedlington Terrier for missing their goals on that Wednesday night in February 1965, three years to the day after my first visit. Coincidentally, that 4-1 scoreline was a repeat of the win at Blackburn in October 1960 which came seven days before my first ever game which was a 5-3 home win against Manchester United.

As much as I’d like to, I’m not going to go through all the goals one by one, mainly because my memory is somewhat faded, but I can confirm that my list has now reached thirty goalscorers who have netted 43 goals between them with four of those players able to claim to have scored twice in a game.

Embed from Getty Images
I suppose this is where I must apologise to the aforementioned Irvine for missing his brace but I have seen all of Andy Lochhead, Arthur Bellamy, John Connelly and now, so very recently, Ashley Barnes score twice in one game against them. Lochhead scored his at Blackburn in October 1962 in a 3-2 win with Gordon Harris scoring the other. Lochhead scored the winner too just past the hour. Connelly, who later played for them having turned down the chance of returning to Burnley, scored his brace just over a year later in a 2-1 win, this after Fred Pickering had given them the lead.

Before the game just over two weeks ago, the only player who I’d seen score twice against them in a game on the Turf was Bellamy. It came on a Tuesday night just eighteen days before Connelly’s double when we beat them 3-0 and that’s now become a familiar scoreline. Arthur got two and Walter Joyce, another who went on to play for them, got the third on a night when Lochhead tormented Mike England to the extent that he got the Welsh international defender sent off. “England’s a bastard,” chanted the Burnley fans. I’m sure that’s when the nickname for our closest rivals was probably born, a nickname that we’ve learned has now reached the current dressing room.

Embed from Getty Images
It’s approaching nine years since my friend Arthur passed away. I spent hours on touchlines at Gawthorpe chatting to him and enjoying his somewhat dry sense of humour as we watched the youth team. On my last visit, a week last Saturday, I chatted about him with former Claret Ash Hoskin as we stood in front of his old bungalow which is now the Arthur Bellamy Media Centre. One day, I was watching a youth team game with Arthur and he asked me about the previous week’s away game before somewhat sheepishly telling me he’d been invited to Ewood that day. He explained that Mick Buxton, a former Burnley team mate, then working for the Premier League, was entertaining in a box. “Did you go?” I enquired. Arthur explained that it had got to Thursday and his wife Maureen asked him if they were going. “I don’t think so,” he said. “I really don’t like going there and, in any case, Buxton’s a boring old fart.” Buxton and Bellamy were the best of friends.

New Year’s Day 1966: Irvine, the finest goalscorer I’ve ever seen at Burnley, got himself on the scoresheet. It was the second in a comfortable 2-0 win. Harris had scored the opener on a day when Ralph Coates sat on the ball taking the mickey and Willie Morgan was sent off for aiming a kick at England. I wouldn’t have minded, but he missed. We were all on the Blackburn End that day but a home fan got on the pitch at the Darwen End and targeted Adam Blacklaw. Adam saw him coming and, shall we say, made contact with said supporter. I hear he’s recovering well in hospital.

Embed from Getty Images
There was a gap of a few years before hostilities were resumed in the 1970s. It enabled me to add another eight names to the list, none more than Peter Noble who scored in four of the six games over a three season period. Tony Morley and Brian Hall are in there too. Morley had already scored against them but the pair brought us back from a goal behind to win at Ewood in April 1979 in what proved to be our last win against them for some considerable time. Others to join the last in that period are Ian Brennan, Malcolm Smith, Peter Robinson, Terry Cochrane and Paul Fletcher. Cochrane’s was a bit special, the only goal of the game in our 1-0 win at Ewood in the 1977/78 season. He was yards out when he let fly with a dipping shot that flew into the corner. Alf Thornton, the Blackburn reporter for the Lancashire Evening Telegraph, claimed it had got caught in the wind. Yes Alf, we believed you.

Derek Scott scored there in March 1983. It might not have brought the house down, coming in a defeat, but the Darwen End was in something of a state by the time this game finished. And then, as we declined, the money went in there and we just couldn’t compete although Micah Hyde scored there in the FA Cup and Robbie Blake, with his last ever Burnley goal, and Chris Eagles both netted in our one and only Premier League game there.

Embed from Getty Images
All good things come to an end, it is often said, and for them, for now, it has. Three draws in 2012 and 2013 have since been followed by five successive wins. Sam Vokes, Jason Shackell, Junior Stanislas, Danny Ings, Scott Arfield, Andre Gray, Jack Cork and Robbie Brady had all been added to the list before they came to town in what was our most recent game closing in on three weeks ago.

It was a wonderful day, winning 3-0 to equal the biggest victory I’ve ever seen against them. Barnes became the 29th player to be added to my list with Anass Zaroury making it thirty. We were comfortable winners and as Sky commentator Gary Weaver said as we celebrated the Zaroury goal: “This is what happens in the East Lancashire derby these days; Blackburn Rovers turn up but Burnley have the upper hand.” When Barnes scored his second to emulate the other AB Arthur Bellamy, Weaver said: ““The oldest rivalry in English football has its newest hero and it’s Ashley Barnes.

Embed from Getty Images
I’ve watched the goals back again today; I have every day since the game was played. Today, I was closely observing the crowd reaction in the lower tier of the Jimmy Mac, the sheer delight and emotion as the goals went in showing just how important this game is when it comes along.

I’d maybe like to add a few more names to my list if possible in March next year but, if things go to plan, we can hope that we then get another break from this derby.

No, I might have known nothing about them back in 1961, but I do now and I know that every goal and, more importantly, every win against them is very special. Is that worthy of some old bloke keeping lists? I reckon saw and below is another of mine, the wins I’ve seen against them and then the one of the players I’ve seen score against them (they are listed in chronological order with the date of entry and the number of goals scored in brackets after their name).