My mate – could he have a trial?

Some sixty-three years ago, a Burnley player, undergoing National Service at Catterick, asked at Burnley Football Club headquarters if his pal from the same unit could have a trial at Turf Moor. 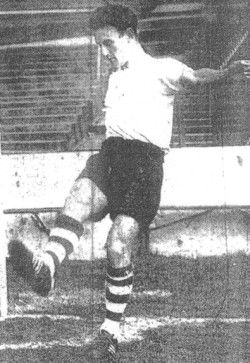 He was told to, “Bring him along,” and the trialist did well, was signed, played in the ‘A’ and ‘B’ teams, was promoted to the reserves, and then, around three years later, took on a most important role in the senior team’s championship challenge. For Trevor Meredith, the five-feet-five wingman from Kidderminster, it was a period of triumph which won him a trip to New York as a reward.

Trevor took the place of John Connelly, who was injured in the closing minutes of the match against Leicester on Good Friday. Connelly returned to training this week in 1960 and had the alarming experience of his knee locking. That meant a visit to hospital and the dreaded report of cartilage trouble. The Football League authorities were notified immediately of Connelly’s enforced withdrawal from the England touring team on the Continent.

During Connelly’s absence, Meredith had been scoring goals and providing passes which had helped his colleagues to gather precious points. Yet, his own carer was in the balance a few months earlier. He had a leg broken in the opening week of the season, and it was a more serious injury than anyone suspected. He had a hard fight to regain full fitness but he attained full health to enable him to introduce his own refreshing style of wing play for the benefit of the club.

And what of the player who introduced him to Turf Moor? That was Walter Joyce, 19 at the time. Joyce joined the Turf Moor ground staff when he left school and then went into the Forces where he met Meredith and was so impressed with his form in Forces football that he asked the club for his pal to be given a chance.