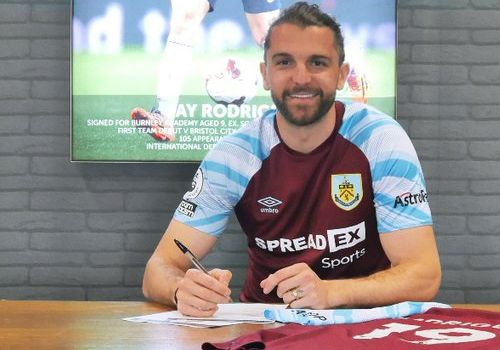 Striker Jay Rodriguez has today signed a new two year deal with the Clarets just a matter of a couple of months before his existing deal expired.

Jay came through the centre of excellence at Burnley to win a first professional deal in the summer of 2007 and became a regular starter for the first team in the 2010/11 season. By the summer of 2012, he was always set to leave and joined Southampton in what was then a record deal for us.

Five seasons on the south coast were followed by two in the West Midlands with West Brom. We were linked with him then in 2017 and again in 2018 but eventually Sean Dyche brought him back to Turf Moor three summers ago.

He’s now made 235 league and cup appearances for the Clarets in his two spells and with today’s news has committed himself to his home town club until the end of the 2023/24 season.

Speaking after signing his new contract, Jay said: “A big thing that’s stood out for me since I’ve been here is the togetherness of the group and how we work for each other. We’re all humble and down to earth. You look at the squad and you know you’re going to work extremely hard. Togetherness is definitely something you notice with the Burnley fans; they are always with you. They can see you working hard on the pitch, and they’ll be behind you no matter what.

“I’ve made many memories so far and hopefully I can make some more soon. You’ve always got to keep improving in football and make as many memories as you can. The club means a lot to me. Having grown up in the area, it is always a pleasure and a privilege to represent Burnley, so when the Club offered the contract, it was a no brainer for me. I couldn’t wait to sign it. To play for Burnley being a Burnley lad is extra special. To see where the Club has come and where it’s at now, I just wanted to be a part of that and I can’t wait for the next chapter at the club.”