Newton at left back as pre-season gets underway at Swansea 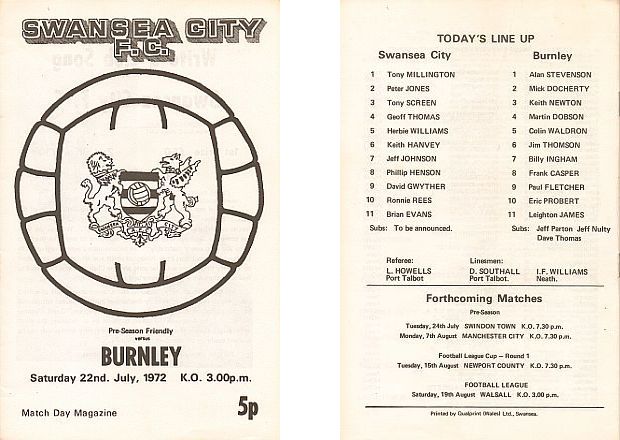 The 1972/73 season was drawing closer. Once pre-season games are underway it does give the feel that the first league game is not too far away and as we travelled to Swansea for our first game the big question was whether our only new signing Keith Newton would play on the right or the left. Manager Jimmy Adamson had confirmed Newton would play in the first game with that being the only poser. Would he replace Mick Docherty at right back or Geoff Nulty at left back?

My trip to the Vetch, my first ever visit there, was something of an experience. I’d met new Burnley Express reporter Peter Higgs the week before at the Express Cup Cricket Day at Seedhill, Nelson and arranged to make the trip down with him. He was staying down in South Wales after the game and so it was just a one way trip with him for me. I don’t think I’d travelled with a member of Her Majesties Press Corp previously to a game but it was an experience.

I was due to meet him at his digs at the Big Window but on arrival, bang on time, I found that the departure had been put back 45 minutes whilst he had his full English. He’d paid for it and he was having it. That meant a race against time to get there. We made it via a somewhat strange route, of which I can remember little, although I do recall having it pointed out to me as we drove through Bolton that Nat Lofthouse had been landlord of one particular roadside pub. It was a long journey on a day when the sun was beating down and those were the conditions down in Swansea for the game.

The big news for Burnley ahead of kick off was that Newton would play left back, and not in his favoured right back position. That meant Nulty missed out and further up the pitch there was no Dave Thomas who remained in dispute with the club over his grievances with the manager. Swansea manager Roy Bentley named former Burnley FA Youth Cup winner Peter Jones in his starting line up at right back.

I got onto the ground with minutes to spare as our local reporter rushed round to the main entrance, hoping to grab pen and paper from a colleague which would enable him to report on the game himself. He did that as I made contact with my lift home and got into position with my mates behind the goal at this far from impressive football ground.

The start wasn’t too impressive either. We fell behind after fourteen minutes when we conceded a free kick out on Swansea’s right flank. There seemed to be no danger from Herbie Williams’ low cross but Billy Ingham mis-kicked and David GWYTHER hooked it home into the top corner from around the penalty spot.

If the start hadn’t been too impressive then the rest of the performance most certainly was as the Clarets went on to win the game 2-1. When the half time whistle blew, we were still behind, but it was hard to believe given the way we’d played. We’d found their goalkeeper Tony Millington in superb form and one save from Paul Fletcher, just before half time, was stunning.

Our fortunes changed early in the second half, and it was all courtesy of home defender Keith Hanvey. In trying to find Millington with a back pass he could do no more than lay it into the path of Burnley’s Frank CASPER who run on with the ball and scored easily. That was just six minutes into the second half and from then on we dictated the game. The longer the game went, the more we got on top.

Swansea made changes during that second half and shortly afterwards they did force Alan Stevenson into making an outstanding save. Down at the other end, Millington saved from Casper and again from Fletcher, somewhat fortuitously with his legs, and even when he went off his replacement Lyn Davies (and not Lynn Davies the former Olympic long jumper) saved brilliantly from Eric Probert.

Finally, with just seven minutes remaining, we made it 2-1 and it came from one of the best moves of the game. Colin Waldron hit a long pass down the right wing to Casper who flicked the ball on to Martin Dobson. He moved forward with the ball to the line and crossed to supply INGHAM with the simplest of chances which he took with no mistake.

It really had been a good showing from the Clarets with good performances right across the pitch. it certainly impressed Adamson who said at the final whistle: “This was a good competitive match, not like a friendly at all. I was very, very pleased with the number of attempts we had at goal. It was very hot out there and the players adapted themselves very well to the conditions. In general the team work was very good. Swansea were not an easy side to play against. They were obviously anxious to do well in front of their own supporters.”

He added: “I thought Keith Newton had an excellent debut and Alan Stevenson was very safe in goal. His catching particularly was first class. Paul Fletcher was very unlucky and could have had a number of goals. Martin Dobson was tremendous in midfield.”

Not everything pleased him though. “I was not very happy with dead ball situations,” he said. “We almost gave a goal away from one set piece. This is something we shall work on. It’s better that this kind of thing occurs in a friendly than when the competitive matches are underway. No one was injured either, and we are very pleased about that.”

Burnley were staying down in the South Wales area for a game against Newport County on the Monday. I made my journey home with a group of Burnley fans and the journey back home wasn’t without incident either. Again, I can’t confirm the route but I know we had a pub stop in Bylth Wells. We also came to a halt at one point with the car out of petrol and incredibly it was official and deliberate with the driver carrying a can in the boot.

Eventually, at some ridiculous hour, we were home. My first visit to Swansea was over. Still, it was good to have the football back and, as always in July, I was full of confidence, sort of, for the new season. I wasn’t going to Newport for the next game but would have another first to come a week later, Sincil Bank for our Watney Cup tie against Lincoln City.

The teams at Swansea were;