No new injuries ahead of Arsenal game 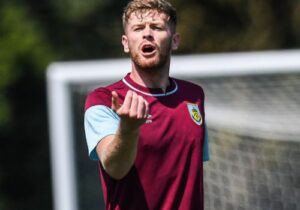 Sean Dyche has confirmed that some players are still out of the running for selection this Saturday when we play our fifth Premier League game of the season against Arsenal.

Dyche reported that Kevin Long is moving closer to fitness but isn’t quite there yet while Connor Roberts has had some game time in a behind closed doors game. He suggested both are on their way back.

Elsewhere, he said that Nathan Collins (pictured), injured on international duty recently, is back among it while Dale Stephens is behind those three in terms of being available.

Other than that, everyone else is fit but he wouldn’t be pushed on Maxwel Cornet who he said has settled in, has trained well and comes in with a smile on his face. The likelihood is he’s going to be on the bench again.