No TV cameras or Welsh music for cup tie 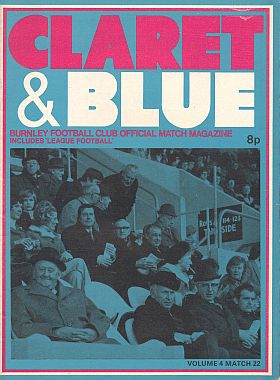 It was FA Cup week this week with Burnley going through to the 4th round with a 4-2 home win against Peterborough United.

Football fans love a cup run but they are something Burnley supporters have not been used to over the years and only once in recent times, at Watford in 2003, have we reached the 6th round.

Today we look back at the last time Turf Moor staged a 6th round tie that led to us reaching the semi-final. It came in 1974 when we won a home tie against Wrexham and you had to be at the game to see any of it because, thanks to Bob Lord, we couldn’t even see the highlights, and what a storm that brewed up.

We had beaten Grimsby in the 3rd round 2-0 at Blundell Park (and who says we never beat Grimsby?), Oldham away in the 4th round and Aston Villa at home in the 5th to set up what on paper looked to be the easiest option in the 6th round.

There was no live football on television in 1974 but the BBC and ITV were to carry the highlights of two matches each, ours was scheduled for the BBC. There was an agreement with the FA and the TV companies but that did not prevent Bob Lord from refusing them permission to film the Turf Moor tie. “I have never said that I am against the televising of football matches. But if the TV companies want to come to Turf Moor they have got to compensate us adequately,” said Lord. “£10,000 is a reasonable figure to cover this. If the TV companies are prepared to pay we shall be quite happy to receive them. The ball is now in their court.”

This was not going to happen, they were never going to pay that. The agreement was already in place and a spokesman for the BBC responded, “Our contract is with the Football Association and we do not enter into negotiations with individual clubs. We do discuss with the clubs the question of a disturbance fee but this is only a small amount.” 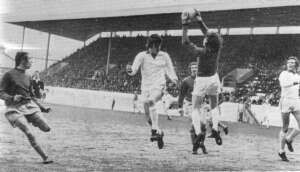 This did not appease the Burnley butcher and after finally refusing them permission to screen the game he added, “The TV companies have been getting their football on the cheap for far too long. It’s about time they paid for what they got. They wanted to screen the cup-tie at Grimsby and offered each club £87.50 compensation. That’s a ridiculous figure. They ought to pay for football the same as the top stars like Morecambe and Wise.”

The Football Association were left powerless but were certainly angry with Burnley Football Club and Chief Executive Ted Croker threatened, “In view of recent events clubs may find that next season they must agree to the terms of the contract with the TV companies for the televising of FA Cup matches before entering the competition.” This came after their final plea to Burnley was turned down by Lord.

Lord went further though and in the week leading up to the game he caused uproar in Liverpool during a speech at a luncheon to honour Liverpool footballer Ian Callaghan.

During his speech Lord said, “We have to stand up against a move to get soccer on the cheap by the Jews who run television”. There were several Jewish people in the audience who immediately left and it took ten minutes to calm things down during which one guest brandished a knife at the Burnley chairman.

The town turned against him, with a condemning statement from the mayor whilst the BBC and ITV issued a joint statement to the FA that said that Mr. Lord did not represent the interests of football or honourable behaviour. They also accused him of making abhorrent and obscene anti Semitic remarks.

But that wasn’t all, Lord hit out at Burnley fans who criticised the 25% increase in prices for the match (ground admission went up from 40p to 50p for adults). Only a few weeks earlier he had attacked Burnley fans after only 18,000 turned up for a Saturday evening game and said that any supporters who just chose their matches were simply not good enough. They had to attend all games. 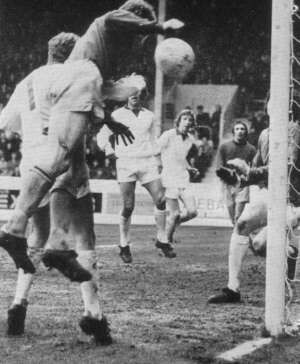 And then finally he upset a group of Wrexham fans and one of their directors when he refused a request to play the song “Music of Wales” before the game. In his own style Lord said, “Supposing every time we played a Scottish, Irish or Welsh team and the opponents wanted to put on some songs regarding their nationality. It’s just not on. We can’t upset our way of life just because Wrexham are coming. Who do they think they are?”

So having upset just about everyone we finally played Wrexham on a day when the BBC’s Match of the Day could show only one cup tie and had to fill in on the programme with a league game. The game saw a welcome return to Turf Moor for Frank Casper who was starting for the first time in a home game since suffering a bad injury in September against Spurs.

Despite the home draw Burnley did not play in Claret & Blue. The two sides couldn’t agree and so both teams had to change and we played in our then away strip of royal and sky blue. The shirts were royal blue with claret trim, whilst the shorts and socks were sky blue.

We didn’t start the game well and Peter Higgs of the Burnley Express described our first half performance as a stuttering and stumbling display although he went on to add that after the interval it was replaced with the silk-smooth style of Burnley at their best. And it was just after half time that Frank scored the only goal of the game with a shot from 20 yards that took a deflection off Wrexham’s Dave Fogg.

Would it have gone in without the deflection? Over to Casper who said, “I hit the ball well but I just couldn’t tell whether it would have beaten the keeper or not.” Almost certainly it wouldn’t have but the deflection did take it past him and Burnley were in front and about to go through to the semi-finals. 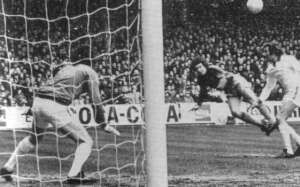 Manager Jimmy Adamson was a happy manager after the game, although not so pleased with the reaction from the Wrexham camp, and said: “We are feeling pretty pleased with ourselves. I was pleased with the result against the North Wales club and although we had spells when we were decidedly edgy and tense we certainly deserved to go through on the overall balance of play.

“Wrexham were very disappointed with the result as is to be expected, but that does not mean that they should try to take anything away from us. It is quite wrong of them to suggest we were lucky because that is far from the truth of the situation. They had two serious shots against eight or nine goal attempts by ourselves and as to the goal Frank Casper scored, it was no fluke.

“It was Frank’s professionalism, marksmanship and general footballing expertise which brought about Wrexham’s final downfall and no matter how much their manager (John Neal) and players want to try to stress that it was just sheer luck will not make the situation any different. Frankly we are rather fed up with this sour grapes attitude, but we feel that justice was done in the end and so we go on confidently to our next match.”

Final word for Peter Higgs who nominated Billy Ingham, in for Peter Noble at right back, as the Man of the Match. “He paved the way for many dangerous attacks with his overlapping down the right wing,” said Higgs.

The game was played in front of a crowd of 36,091 with an estimated 12,000 from Wrexham who did not need Bob Lord’s permission to sing Welsh songs. It was a game played at a highly charged Turf Moor with the atmosphere as good as it gets.