Goals from Paul Fletcher and Dave Thomas gave Burnley a 2-0 victory at Portsmouth in September 1972. It was a first away win of the season, a first since the previous season’s victory at Portsmouth, and it sent us to the top of the league for the first time in the new season. 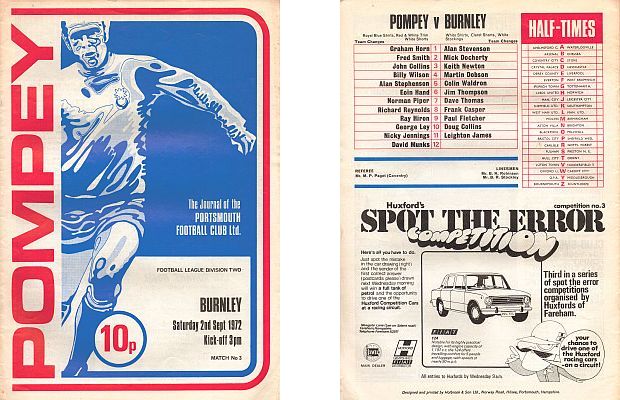 The front page news in town during the week was that of the compulsory purchase of houses in the Gannow area for the construction of the proposed Calder Valley Route, later to be named the M65. One Padiham Road resident was furious. He’d bought his house there, had become part of the community and had decided he wanted to settle there for the rest of his life only to be hit with this bombshell.

He initially thought the compensation offered was generous but was then told by an estate agent that it was worth far more on the open market. Things got worse when he asked the council if he’d be permitted to take with him to a new address, his bathroom suite and central heating system, both of which had recently been installed. Yes, he could, was the answer but he was warned that would reduce his offer price.

He was furious and decided to take action in protest at the treatment he’d received. “If this is how they treat the British public, I’m going to buy my son out of the Army,” he blasted.

Things weren’t getting any better with the strike at Lucas Aerospace and there was something of a rumpus when one poor striker was refused hardship claims by the social security office because he was already receiving £4 per week child benefit for his handicapped child. He basically had just that £4 each week until, with the aid of his union representative Councillor J. Meakin, he won his appeal.

The town’s builders were all still on strike as well with firms in Burnley not part of the Building Trade Employers’ Federation having signed an agreement to pay workers £30 for a 35 hour week. That offer had not been made to Burnley’s builders and chairman of the local workers’ action committee, Mr Ted Roberts, said: “All the major building companies are still refusing to accept our claim, and we are continuing the strike as before.”

In the courts, there was news of the bogus former Portsmouth player who had been sent down a couple of weeks earlier when his cheques bounced at Stewart House and Arthur Benn’s. The appeal had been lodged against the one year prison sentence.

Meanwhile, the town got its first openly gay magistrate with the appointment of Mrs Gay Williams, the daughter of the town’s coroner Mr H. G. W. Cooper and husband of local solicitor Mr William Williams. William WIlliams said of his wife: “She has the right background for a magistrate and the sort of personality which suggests a sympathetic nature. She is a lively person, too, which makes her name, Gay, a fitting one.”

What a start, too, for Rosehill Youth Club who played their first ever game a week earlier in the local Burnley & District League. Facing Fulledge Community Centre, they had a problem when three of their players opted out at the last minute to go and watch Burnley beat Aston Villa, and a fourth, the goalkeeper, had a dental appointment. Youth leader, Mr McParlane, had to go in goal but it was a disastrous start. At one point he was replaced by a spectator but things got worse so they swapped back. In the end they lost 32-2 with both Shaun Exton and Steve Parker netting seven goals for Fulledge. Mr McParlane  said: “I only got the team together last week and we haven’t had much chance to practice before our first league game, but the lads didn’t pack up and I was proud of the spirit in which they lost.”

My sporting weekend started on the Friday. Still on holiday from university, I was working temporarily as a meter reader for the electricity board. It was a special day in the Scholes household with our first colour television due to arrive. It duly did and on my return home from work I switched on to see the athletics at the Munich Olympic games in full colour. I can’t remember which event it was but, in any case, I was ready for my first trip to Portsmouth, and just to make things an even bigger day, Lancashire were playing Warwickshire in the Gillette Cup Final at Lord’s. A win would mean my home county would be winners in three successive seasons.

In what was to be a terrific sporting day for a Lancashire fan from Burnley, we went into the game with all but Peter Lee of the front line bowlers out injured. It meant Clive Hubert Lloyd, more noted for his batting, had to open the bowling. We restricted Warwickshire to 234/9 in their 60 overs. Lloyd conceded only 31 runs from his allotted 12 overs while opening batsman Barry Wood did even better with only 27 runs from his 12 overs, and with the wicket of Dennis Amiss. Lancashire got the runs with more than three overs to spare and the aforementioned Lloyd (Bumble scored just ten) was the match winning hero with a score of 126 before falling to the bowling of Bob Willis.

Whilst that game was being played, Burnley were at Fratton Park against a Portsmouth side who had one point less than us at kick off. Having won both home games in the previous seven days, manager Jimmy Adamson said there would be no change in tactics. “We shall attack when we can and defend when we have to,” he said. “It is most important that we keep winning the ball in midfield. This was an outstanding part of our play against Preston . Martin Dobson, Doug Collins and Dave Thomas were all difficult to pass in midfield. All three played well and we’re looking for similar performances at Portsmouth.”

Adamson named an unchanged team two days ahead of the game and there was one familiar face in the Portsmouth team with former Claret Fred Smith at right back. It looked a difficult game on paper, but the reality was that we turned in another outstanding display to outplay Portsmouth and get ourselves in the driving seat at the top of the league. It was the sort of performance that had people starting to believe that this side were capable of taking Burnley back to the First Division. No one was getting their hopes too high but this latest result meant we’d collected three wins on the back of two draws at the start of the season.

The fine football seen against Aston Villa, and again against Preston, was there once more with some solid defending at one end of the pitch and top class finishing at the other. For the third Saturday in succession we got off to a flying start with an early lead. Colin Waldron hit a long clearance downfield which Pompey defender Alan Stephenson missed completely. That error was seized on by Paul FLETCHER who ran 40-yards with the ball before stabbing home past Graham Horn as two defenders closed in. “As I was running towards goal I planned to hit the ball hard, but I could see a defender getting nearer and as he lunged in I just pushed it with the side of my left foot,” said Fletcher. “I didn’t see what happened to the ball after that.”

We could have added to it. Dave Thomas went close with a superb long range drive and Jim Thomson, who had scored in this fixture in the previous season, almost made it 2-0 right on the half time whistle only to see Smith clear off the line.

Burnley had dominated the first half and should have been further in front, but just as at Fulham in the only other away game, things changed after the break as Portsmouth took control. For a while they were the better side and just when an equaliser looked likely we edged ourselves two goals in front. Leighton James made a good run and was halted just on the edge of the box at the expense of a free kick. Frank Casper took the kick and rolled it to THOMAS who blasted home a viciously swerving drive.

From that moment on there was no chance of Portsmouth getting back into the game. Burnley took control, contained the home side easily and might just have had another goal to add. “It was a most important match but we rose to the occasion and showed we can play away as well as at home,” said a delighted Adamson. “Everyone did their stuff but once again the foundation was at the back. The defence was very solid and Alan Stevenson had only one shot to save, and that was from his own mistake.”

We weren’t the only winners at the top. Both Nottingham Forest and Sheffield Wednesday remained level with us on points, but the win had taken our goal difference to 2.75 which allowed us to claim first place. Further down the table, Preston finally got their win and climbed off the bottom and up five places to 17th. Bristol City had now dropped to the bottom of the league.