One point at Easter takes Burnley back to the top

Burnley picked up a point from a 1-1 home draw on Easter Monday in 1992, two days after the away game at Rochdale was called off, and that one point was enough to take us back to the top of the league.

Rail travellers, including mums with young children, were fortunate to narrowly avoid disaster when their train slammed into a metal lamp post and heavy stones that had been dumped on the line in Daneshouse by mindless idiots. 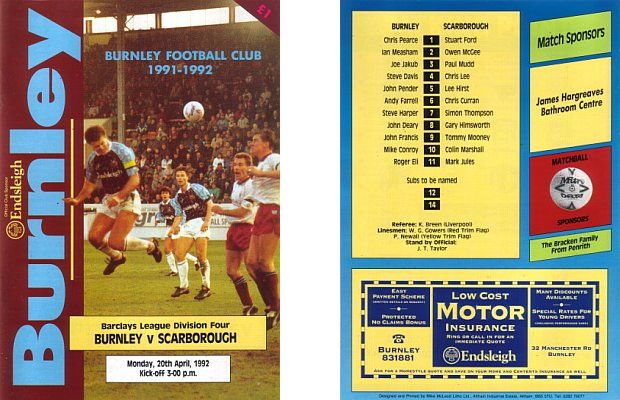 The train was able to come to a stop after 200 yards with its undercarriage badly damaged but thankfully there were no serious injuries. Rail staff called out to investigate found loosened track not much further down the line and the passengers had a long wait before another train could take them back to Burnley Central Station.

Jim and Olive Hill were left shaken after an incident at home. The couple were watching television at their home in Coal Clough Lane, unaware that a burglar was searching their bedroom. They heard him coming downstairs and they tackled him despite him wielding a knife. He got away but dropped most of the items he’d stolen other than two watches and a gold chain.

Shaken but unhurt, Mr Hill said he hoped he served as a warning to others. “We usually keep our front door locked and bolted when we are in during the evening. We must have forgotten and this happens,” he said.

Although busmen said no to supporting the call for strike action, the local service was set to be disrupted after there was an agreement for some industrial action. Disappointed with the vote against the strike, the chairman of the Burnley branch of the Transport and General Workers Union, Mr William Smith, said: “I did think we would get full support for strike action but we did not take into account the fact that the men would lose money. I think that put them off voting for a strike.”

Local cricket got underway over the weekend but it wasn’t a good day for either Burnley or Lowerhouse who were both beaten.

Burnley fell to a three wicket defeat at home to Bacup. New professional Sam Skeete had a disappointing debut with only Duncan Spencer (40) and Terry Little (39) causing too many problems with the bat. Matthew Hayden, who would go on to be an outstanding opener for Australia, scored 73 for Bacup having taken four wickets. Lowerhouse pro Tony Dodemaide took three wickets at East Lancs but Lowerhouse were beaten by 67 runs with Stan Heaton top scoring with 34.

The Clarets travelled to Rochdale on the Saturday or should have done. There were a considerable number of Burnley supporters made the journey, only to find that the game had been postponed due to a waterlogged pitch.

That was a bit of time and petrol wasted but it was very much game on at the Turf on the Monday. Jimmy Mullen’s claret and blue army were on alert for the final push, starting with Scarborough at Turf Moor.

This was a game that we should have won but we had to settle for a point from a 1-1 draw. We scored one of the best goals of the season, bombarded the Scarborough box with a rain of crosses and shots, more than enough to have provided us with a hatful of goals. But Scarborough got their point, gifted to them after we conceded a sloppy goal.

We might have fallen behind when a shot was cleared away off the line by Joe Jakub, Riccardo Gabbiadini had almost given Scarborough the lead but almost immediately, a super save from Stuart Ford denied Mike Conroy and it needed to be a super save.

Then, with just nine minutes gone, a good tackle from Steve Davis and a nice ball from Andy Farrell which released Conroy. He was looking for support; he found it, Roger ELI, super goal. It really was a super headed goal following a right wing cross from Conroy.

Past the half hour and Scarborough won a corner. Twice, Chris Pearce failed to deal with it; it allowed Scarborough to get the ball back into the box and it was Gabbiadini who got the final touch to draw them level.

The second half was literally all Burnley. We threw everything at Scarborough but found Ford in goal in superb form and on the one occasion he was beaten, John Pender failed with an easy header, somehow missing the target.

We’d been without a league fixture for over two weeks but came back with a convincing performance where the only disappointment was not getting the goals we should have and therefore having to settle for a point.

We’d kicked off a point behind Blackpool but their defeat at Rotherham saw us go ahead of them on goal difference, as did Rotherham who moved into second place. Mansfield, on the following night beat Halifax 3-2 and that left all four of us on 73 points.

Our advantage over the other three was clear. They’d all played forty games which left them all with two to play. We still had five more games to play, starting with Cardiff two days later.

« Referee confirmed for Wolves game
The Dyche era is over »