Burnley had no answer to Stoke City in the first leg of the League Cup second round and fell to a 4-0 defeat with a trip to the new Britannia Stadium to come.

Over recent reports, we’ve been following the fortunes of baby Chantelle Ryan who had suffered severe burns in a house fire, and finally there was some really positive news with her off the danger list having not been expected to live. Doctors had told her parents that she could be home before Christmas but it would be two years before she could be exposed to sunlight and that she would need special care for a long time. 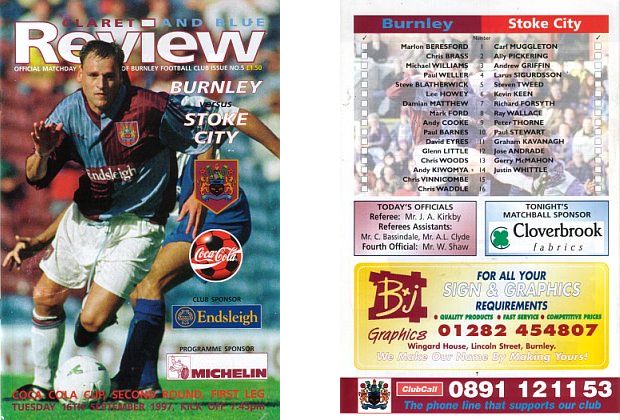 Her mum Roseann was thrilled with the news and had launched a fundraiser for Booth Hall hospital. “They’ve been our lifeline, we can’t thank them enough,” she said.

If it was good news for Chantelle and her family, it wasn’t for a 22-year-old Burnley man who was attacked outside Sidewalk and had his face slashed in what police described as a vicious robbery.

Burnley was moving into the modern world, and this at a time when I thought having a home computer was an abhorrent idea and, for me, nothing more than a busman’s holiday. Locals were being given the opportunity to connect to the World Wide Web on their televisions by connecting NetStation to the set and to the phone line.

From the modern world to the ancient at Towneley where an Egyptian mummy and coffin were on display in Towneley Hall. The exhibit had been given to the museum by former owner Lady O’Hagan. The mummy had been examined using x-ray equipment at Burnley General Hospital which revealed it was a young, male adult and was dated around 1,000 BC. Mrs Claire Stewart, the keeper of art, said: “If you were really rich you had a wooden coffin made because there were not many trees in Egypt so it was a sign of wealth. If you couldn’t afford wood, you were just wrapped in bandages.”

Troy Duxbury was in court having taken part in a house raid that had netted a £1,630 haul but on the night before arriving at court, he’d saved his cell mate’s life while on remand. He’d gone to sleep but wakened to find his cell mate trying to hang himself. He saved his life before calling for help. Mr Robert Crawford (defending) told the court: “This man has made some contribution in assisting in what was a very serious situation.” He also confirmed that he had a decent and supportive family and a girlfriend who was standing by him with whom he was going to set up home. It didn’t help him; he was sent down for eight months.

On the subject of house burglaries, a house in Cleaver Street was broken into with a video recorder, valued at £535, stolen. How the world has changed since. I have two at home that are free to anyone who wants them, otherwise they will be going to the tip.

A drug dealing ring of eight, with some from Burnley, were selling heroin, but they paid for it when they sold some to Jo and Jean who were undercover police officers. One of the eight was found not guilty when they appeared at court, but the other seven received sentences for a total of 38 years. Judge Brian Duckworth told them: “There is a need to punish people like you. It is true that very often the big fish manage to swim away from the net and take refuge in their tin houses moored to the seafront in Monte Carlo, but down the chain there are many people like you who play their part.” He added: “Heroin is so highly addictive. Once somebody is hooked on heroin they are hooked for life. That is why I say that you were dealing with death.”

Drug squad officers were delighted with the verdicts. Working under Operation Zeus, Det. Sgt. Peter Weldon said: “All credit must be given to the two undercover officers in this case. It is mainly down to their dedication and hard work that this result was achieved. This should send a message to people not to get involved in that kind of activity. They will be caught.”

What a bad night it was for the Clarets. Edward Lee, reporting for the Burnley Express, wrote: “City were simply in a different class for an hour of the game, and Burnley could have conceded a lot more than the four goals Stoke actually put past them.”

We actually started well with Neil Moore, who had signed a one-month contract, coming into the side and turning in a man of the match performance. He played at the back with Lee Howey pushed up front to partner Paul Barnes with Andy Cooke ruled out with an injury.

We were the better side for the first half an hour. Mark Ford was a huge influence in the midfield and he couldn’t have come closer to giving us the lead, only to be denied by the woodwork as his header from a Barnes cross smashed against the post.

Just past the half hour, a flowing move saw Howey come so close but it proved to be our last chance of the night and it all changed eight minutes before half time when Stoke, who had hardly threatened, went in front with Peter THORNE hitting home with a superb shot at the end of an excellent move.

Although we stayed just one behind until past the hour, we were never going to get back into the game on the night and that was confirmed when Ally Pickering set up THORNE to powerfully head home his and Stoke’s second.

Six minutes later Graham KAVANAGH scored with a 25-yard screamer and KAVANAGH was on the spot again in the closing stages to score number four when Marlon Beresford allowed a soft one to go through him.

Barnes almost scored in the very last minute but, by then, we were a well beaten side with little hope of us pulling things round in the second leg.

There were just three players with Burnley connections who scored in the round and all three were players we’d had or would have on loan. Paul Mahorn, who had been with us two seasons earlier, scored Tottenham’s winner against Carlisle. Two players who made their Burnley debuts at Stoke six seasons later were also on the scoresheet. Andy Todd netted Bolton’s first in their 3-1 win at Leyton Orient and Gareth Farrelly scored Everton’s goal in the 1-0 win at Scunthorpe.