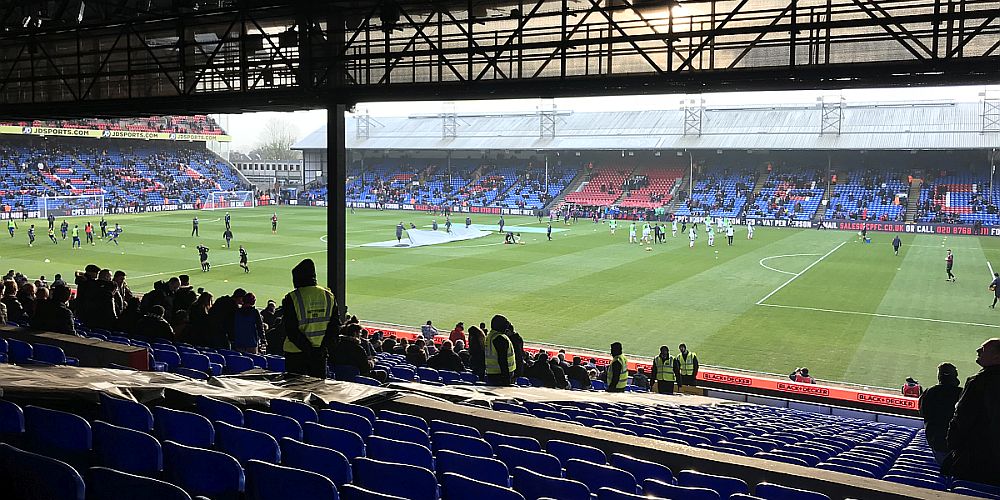 When we travelled to Brighton just over a week ago, I think it’s fair to say things weren’t looking too good for us in the battle to avoid relegation from the Premier League.

Ahead of that game, we were bottom of the league and seven points from safety. Yes, games in hand but, even so, things were almost reaching the critical stage. Then, a win at Brighton moved us up one place with a win last Wednesday, just four days later, taking us up yet another place.

We couldn’t make it three out of three at Palace but the 1-1 draw brought with it a good point, more so having to come back from going behind early in the game, and we are now within immediate striking distance of the three teams directly above us, and with games in hand on two of them.

I’m not sure what the fixture planners thought we’d done to deserve trips to Brighton and Crystal Palace on successive Saturdays but the away fixtures overall this season have been strange with all the games north of Watford scheduled for the first half of the season and the second half almost exclusively in the south of the country.

Embed from Getty Images
It meant another early departure for Burnley fans to one of the most difficult football grounds to reach. Unfortunately, I wasn’t one of them. For the second successive Saturday I was unable to make the trip and, therefore, had to rely on the Sky delayed coverage of the game.

After the sheer joy of the Spurs win, it was probably no surprise to see us name an unchanged team, but the bench was looking a bit stronger with all of Charlie Taylor, Ashley Westwood and Maxwel Cornet named among the substitutes.

Palace had won convincingly at Watford in midweek, but manager Patrick Vieira made three changes, bringing in James McArthur, Luka Milivojević and Jeffrey Schlupp with Cheikhou Kouyaté, Will Hughes and Jean-Philippe Mateta losing their places and going on the bench.

Could we get off to the sort of start we had at Brighton? Down at the Amex we had the home side on the back foot from the off but this time it wasn’t quite like that, and we fell behind in only the ninth minute of a first half in which we never quite looked at our best.

Embed from Getty Images
We did have the first shot on goal with Aaron Lennon firing just wide but in only the ninth minute we fell behind. Michael Olise, signed from Reading last summer, was the architect.  He got the better of Dwight McNeil on the right hand side and his low cross was met by Schlupp just inside the six-yard box and he gave Nick Pope no chance. There was a question of offside but I’m not sure the clear pictures were made available, but it was ruled onside and given.

I’d been looking at past results between us and Palace in the build up to the game. Despite us having both won and lost 3-2 in home Premier League games against them, and drawn 3-3 this season, there hasn’t been one occasion in this league that we’ve met at Selhurst Park in a game in which both teams have scored.

For those who look for such omens, that was a concern, but probably of more concern was that we didn’t really look as though we might score although, in truth, Palace didn’t really offer too much more of a threat although they did look the more likely and Olise, the best player of the half, hit one shot over the top and forced Pope into a save.

I think, once that early goal had gone in and the way the rest of the half went, we were probably happy to go in just a goal behind at half time. There was no telling off in the dressing room according to Sean Dyche, maybe just one of his quiet words, but we needed to offer more in the second half, and we did.

Embed from Getty Images
With just 37 seconds of the half gone, we were level. Palace started the half but after a bit of head tennis, Wout Weghorst and Aaron Lennon worked the ball out to Connor Roberts on the right. His first ball in eventually got back to him but his second ball in proved decisive. From the ball in, Jay Rodriguez found Lennon with a superb, cushioned header. The winger got the ball back in and it deflected off Milivojević and past Jack Butland and into the net.

Lennon was asked after the game if he was going to try and claim it. He seemed nonplussed but the fact is this was very much an own goal. A decade or so ago we used to ensure goals were given to Charlie Austin when they were clear own goals, but I doubt we’d have even tried it with this one.

So, both teams had scored in this fixture at Selhurst Park. The only previous occasion that’s happened in a top flight game between us there was way back in February 1970. And, believe it or not, in a 2-1 win our first goal was an own goal from John Loughlan. The 26-year-old left-back was in his second season at Palace and at the time had a three-week-old son. That son is Tony who went on to become first team coach at Burnley from October 2012 until last summer.

When you need an early equaliser, you can’t do better than that and it led to undoubtedly a much better second half. This was much more like it and twice we came close to a second through Weghorst. From a left wing corner his header was tipped over by Butland and soon after had the ball in the net only to see it ruled out by the assistant’s flag.

Embed from Getty Images
This was very much a correct decision. Westwood, on as a replacement for Jack Cork, found Rodriguez with a ball forward. Jay chested it down and then saw his shot saved by Butland with Weghorst coming in to turn in the rebound. Jay was given offside from the Westwood ball although it was a mightily close decision.

We did have some defending to do and we had to survive two efforts from Wilfried Zaha within seconds of each other. Pope saved the first of them and was then relieved to see the second come back off the foot of his left hand post.

That was about it and we saw out the five minutes stoppage time without any concerns and earned ourselves what was a very good point.

Dyche will always tell us that it’s what we do and not what others do, but it doesn’t stop us having a look and delighting in Everton, Leeds and Brentford all losing again even though Brentford’s defeat was against Newcastle who now look to be heading out of danger.

Embed from Getty Images
Now, the relegation battle has changed. We are definitely still very much part of it, you can’t be anything else if you are in the bottom three, but this last week has given us all a boost and the hope that we can avoid the drop.

We don’t know how many points we are going to need but the sooner we get more points on the board the happier and more relaxed we can be. This one, in the end, was another good day and now we have Leicester and Chelsea at home, two very difficult and two very different games.