Top of the Fourth Division, but Burnley took a break from league action on this day in 1992 to win a penalty shoot out against Rotherham United following a 1-1 draw in the Autoglass Trophy.

When you’ve been part of a family gang involved in a crime and you’ve escaped punishment while seeing all of your mates jailed, you probably think you’ve got away with it, but not so for one Burnley man. 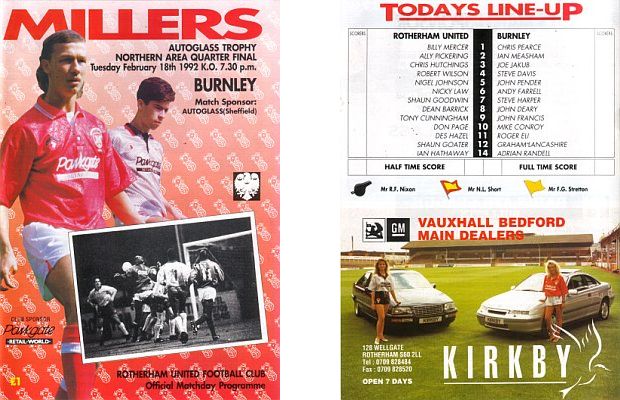 David Walmsley had been involved in a £1 million drug smuggling scandal in Burnley between 1979 and 1981 as part of a business run by his uncle John Green. Walmsley escaped punishment when he fled to Europe and the West Indies. He was caught on a visit to England by chance. Police stopped his car on the M55 only to find he was using a false driving licence. That cost him, he’d run the operation from England but was invited to now spend five years in prison by Preston Crown Court.

News was filtering through that there was to be a big increase in the poll tax in Burnley for 1992/93 and that this would include a £30 excess charge to cover the losses because of non-payers. One local man, a Mr Bithell, told the Burnley Express that he was a responsible socialist citizen who had made his payments on time but would not pay this excess and if that meant a stay in Strangeways, so be it.

Another letter, entitled Loos Blues, was from a lady bemused that British Rail could spend a lot of money to improve Burnley Central Station but didn’t include any toilet facilities. She said there was just one disabled toilet and you had to go and ask for a key. “Better not be in a hurry,” she said.

There had been yet another accident at the junction of Manchester Road and Hargreaves Street, brought about by the pedestrianisation scheme. This time it was a collision between a Renault 5 car and a Burnley & Pendle double decker bus. Thankfully, no one was seriously injured but those who needed hospital treatment included an eight month old baby.

Help was at hand. A sign making team arrived to paint ‘give way’ while lines on the road that were more visible than the previous, temporary, signs. Council engineer Jim Pilling said: “The original signs were just painted on the road as a temporary measure, these are permanent ones. We hope that people will be able to see these more clearly and that it will make the junction safer.”

Meanwhile, one of Burnley town centre’s most recognisable faces of the past had passed away at the age of 86. Harry Longworth had sold evening papers from a stall at the bottom of Manchester Road from 1917 until 1962 before working a further twenty years for wholesale newspaper distributors Surridge Dawson in Brown Street. At his funeral he was described as a legend of the town.

The residents of Gorse Hill retirement home in Stephenson Drive were making one last effort to keep their home open. It was reported that they’d travelled to meet county councillors in Preston and were armed. I had a vision of a gang of gun toting pensioners charging to County Hall only to the  realise they were armed with nothing more than a petition.

The town seemed to be beset by vandals again with cars being damaged and a number of cases of house windows being smashed, one on Harold Street when their own stone garden ornament was used. Probably the worst was at Primrose Hill School in Harrogate Crescent where trees, which had been planted in memory of two dead pupils, had been ripped up and broken on. Teacher Mrs Joan Pilsborough said: “The children themselves had planted them and worked hard to get them sorted out, so when they saw them lying on the ground and soil all over the windows they were very upset.” The trees were replanted in the hope that hadn’t been permanently damaged.

A month earlier, it was revealed that parking charges would be reduced for shoppers in the town centre although workers would have to continue paying 50p per day. Then, with the ink hardly dry on that, the council’s Planning and Environment Committee approved an increase for workers who would now have to pay 70p per day. They were invited to use the long-stay car parks for 50p with Councillor John Greenwood explaining: “We need to keep the commuters out of the town centre. We don’t want to penalise them and won’t put their charges up.” It was estimated that the new charges would increase annual income by £42,000.

There were problems in the town on Sundays with some shops opening against the Sunday trading laws. Local MP Peter Pike described the situation as anarchy. He said: “The Government position on this issue is totally unacceptable. They have a responsibility for ensuring that the law is enforced until it is changed and enforced uniformly throughout the country. By failing to do this they are encouraging virtual anarchy with regard to the present law and opening the door to others who find other laws unacceptable to take a similar type of approach.”

This wasn’t a Sunday, and it wasn’t Fourth Division action either as the Clarets travelled to Millmoor to take on a Rotherham team for the fourth time in the season. We’d already knocked them out of the FA Cup but had seen the Millers do the double over us in the league. Now it was the northern area quarter-final of the Autoglass Trophy.

Manager Jimmy Mullen had injury issues with doubts about Andy Farrell (head), Ian Measham (back), Steve Harper (calf) and Mike Conroy (back). Conroy was the biggest concern, he’d suffered the injury in the 5-0 win against Northampton and aggravated it at Scunthorpe. Mullen said ahead of the trip to South Yorkshire: “Rotherham have proved that they are a good side and Saturday’s defeat at Gillingham (they were beaten 5-1) just proves that the Fourth Division has a habit of kicking sides in the teeth when they think they are going well. We are under no illusions about how difficult things will be for us at Rotherham, but it is important for us that we keep our good run going, and we will be going all out to earn a semi-final place.”

All of the doubtful players were passed fit and the only player absent was the cup-tied Adrian Randall on what proved to be a long night with us going through in a penalty shoot out after a 1-1 draw yet Burnley should have ensured victory long before it got to penalties. Rotherham missed two simple chances and saw Chris Pearce make a save. That was all in the opening five minutes, after which it really was all Burnley. The opening goal came in just the tenth minute. John Francis released Roger Eli who in turn played the ball out wide on the right to Measham. The full back’s cross was met by Conroy who touched it on for FRANCIS to finish from close range.

Things should have got even easier for Burnley when referee Bob Nixon sent off Rotherham’s Chris Hutchings for what he deemed a professional foul on Eli. In a bizarre moment, Burnley boss Mullen remonstrated with the referee, claiming he’d got the decision wrong, but Nixon stuck with his decision and Rotherham were down to ten.

Rotherham defended well, it has to be said, with goalkeeper Billy Mercer in fine form, but this game should have been put to bed on several occasions only for good opportunities to be wasted. Farrell missed the target when it looked easier to score and then John Deary went one-on-one with Mercer, took the ball past him before shooting wide of the empty net.

We paid the price when substitute Ian Hathaway broke down the left and crossed for Des HAZEL to score an outstanding equaliser but it shouldn’t have counted. Hathaway clearly took the ball out of play before crossing. Again, the officials stuck to their incorrect decision.

Rotherham hung on to the end, and through thirty minutes of extra time, before Chris Pearce became the Burnley hero. We had to come from behind in the shoot out too with Francis, who took the first kick, having his effort saved by Mercer. That was our only blemish. Measham, Steve Davis, Deary and Conroy all went on to score while Pearce saved from Neil Richardson and Dean Barrick. Burnley were through.

Three league games were played on the same night with one crucial fixture between second place Blackpool, our next opponents, and third place Barnet. Blackpool won it 4-2 to draw level with us at the top of the league although we did have two games in hand.

« Brownhill’s day against Liverpool
Friend is at the Amex »