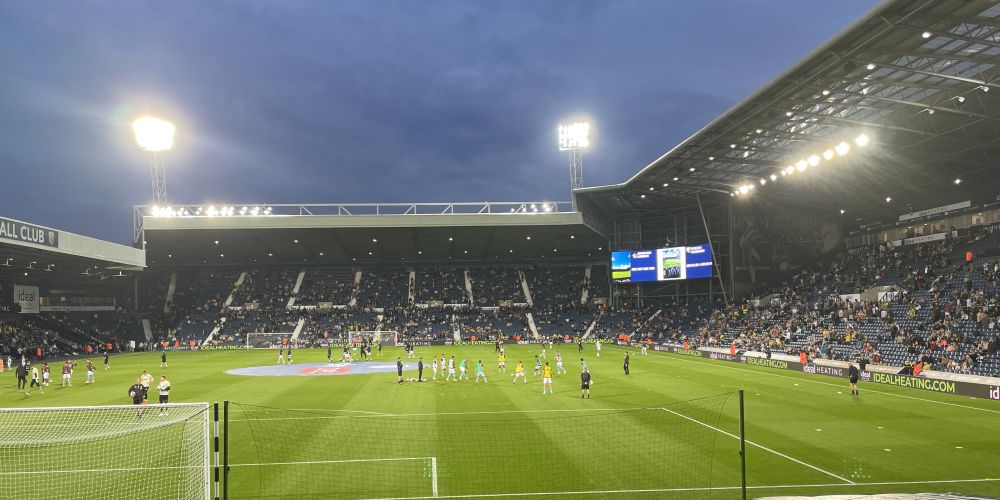 Burnley came home from West Brom on Friday with a point from a 1-1 draw but we came so close to making it a third Championship away victory of the season.

West Brom’s equaliser came with just past seven minutes of stoppage time gone at the end of a second half in which we’d missed definitely two good opportunities to score what would surely have been a match clinching second goal with us also denied a clear penalty for handball. Having said that, we were fortunate to get that point having played second best to West Brom for most of the game.

Surprise, surprise, we had traffic issues on the way down to the West Midlands being forced off the congested M6 and eventually driving past Molineux on the way to our chosen hostelry in Tipton. Thankfully, being Friday, we’d given ourselves ample time and that allowed us to eat, have a drink and get parked up close to the M5 in good time just as it decided to rain.

We chatted to a few Burnley fans outside the ground, even to some Baggies, as the team news came through. We’d made one change with Ian Maatsen coming straight back in after his suspension with Vitinho moving onto the right hand side and Jóhann Berg Guðmundsson dropping out. With CJ Egan-Riley also returning to the bench, it meant no places in the match day squad for either Matt Lowton or Dara Costelloe while the most recent new signings, Anass Zaroury, Halil Dervişoğlu and Jordan Beyer were all there with a watching brief.

Embed from Getty Images
The home side certainly had the better of things in the first quarter of the game. They forced Arijanet Muric into a couple of good saves and failed to find target with a couple of chances. Attack wise, we saw a Jay Rodriguez effort saves and Nathan Tella hit a terrific shot that went just wide.

With the half hour approaching, Grady Diangana fired a shot way over the Burnley bar and I don’t think many at The Hawthorns thought it would lead to the first goal. Arijanet Muric passed the goal kick to Charlie Taylor who immediately played it back to him. Muric then, as he did against Millwall, hit a superb pass forward for Tella to run onto. Against Millwall, Tella was taken down outside the penalty box having controlled the ball. This time, he brilliantly brought the ball under control with his left foot before pushing it past David Button with his right. Button clipped him and referee James Linington pointed to the spot.

Some thought it should be a red card for the goalkeeper but the yellow was absolutely correct; he’d made a genuine attempt to play the ball and had actually got a touch before fouling Tella. Jay Rod stepped up to score from the spot to give us the lead. He’d received a lovely reception from the home crowd before the game and responded by not celebrating the goal.

Given what we’ve seen this weekend in the Premier League, it’s worth pointing out that from foul to goal, it was around ninety seconds without the ever more ridiculous VAR to intervene.

Embed from Getty Images
Diangana did hit the woodwork before half time and I think it’s fair to say we could consider ourselves a bit fortunate to go in at half time with a lead. We’d been nothing like ourselves; we’d repeatedly given the ball away cheaply and with that we were not dominating possession.

The game probably had its quietest spell in the early part of the second half but that changed when we made a double substitution with both Darko Churlinov and Guðmundsson coming on. During the next period of the game we really should have ensured we won it with Churlinov very much at the forefront of proceedings.

He firstly broke down the left with JBG available to him in the middle. All he needed to do was square the ball but it tried a shot from a tight angle that was never going to hit target. He then latched onto a poor back pass. As he pushed the ball past the goalkeeper, I, from the far end, thought he’d clinched the win for us, but it hit the post and came out to safety.

When he next got into the box, it wasn’t he who got anything wrong. This time his attempt to get the ball back into the middle was stopped by a clear handball from Dara O’Shea which was not seen, well certainly not given, by the officials. No, I’m not going to moan about there being no VAR, I prefer not to have it and accept that we are going to get this happening. Having said that, there’s no guarantee even with VAR that they get things right.

Embed from Getty Images
West Brom, though, must still have wondered how they were behind and they did start to put us under some pressure. We made a couple more changes which saw Jay Rod go off to more warm applause from the home fans and then, on 83 minutes, we had to change goalkeeper again.

West Brom substitute Brandon Thomas-Asante caught him. It was a complete accident but after receiving treatment twice, our fifth change saw Bailey-Peacock Farrell come on for him.

By now, we were having to deal with a lot of pressure but we got to ninety minutes still in front, only to see the board showing eight extra minutes. Despite all that pressure, I didn’t think we were going to concede and we should have scored ourselves. Ashley Barnes, who had come on for Jay Rod, did so well to control the ball and turn but then made a hash of his shot, firing it way over the bar.

I kept checking the watch, West Brom kept banging balls into our box and we continued to deal with them until there was just about one minute of the eight remaining. This time, Peacock-Farrell looked to hesitate, Connor Roberts got his defending all wrong and Thomas-Asante managed to get the ball home for the latest of equalisers.

Embed from Getty Images
To concede a goal so late is devastating. The whole away end just went flat. It was hard to believe what we’d seen. You looked round and everyone looked devastated. We were so close to winning the game and going top of the league for a day at least.

It wasn’t to be, and in the cold light of day this was probably a good point given how the game had gone for ninety minutes plus a lot more. West Brom were better than us on the night and I’m sure they’d have been shaking their heads had they not got something from the game.

Even so, it’s five league games now without defeat. We can’t play well every game, no team does that, and we looked tired in this game. There was a real lack of energy about the performance and that’s what led, I’m sure, to us giving the ball away so much.

We’ve got a week now before Norwich come to the Turf. It’s been a tough schedule in these last two or three weeks so I think the lack of a midweek game will help us and at least we can concentrate fully on the football now with the transfer window having closed.