Pope is November Player of the Month 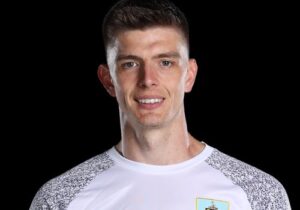 The result from the Spurs game should have gone some way to deciding the Up the Clarets November Player of the Month but the postponement meant everything was based on the draws at Chelsea and at home against Crystal Palace.

Deservedly, after his performance at Stamford Bridge, the award has gone to Nick Pope with the ten points he won that afternoon and he joins Dwight McNeil, Maxwel Cornet and Nathan Collins who have been winners in the three previous months. Having won in September, Cornet was joint second in October and is again this month with Ben Mee and Charlie Taylor.

Four games in both August and September, five in October and two in November but the December award will be tougher to win with us having seven games during the final month of 2021, starting and ending with the two Amazon Prime games at Wolves and Manchester United.

It all starts tomorrow night with the first man of the match vote and player ratings following our game at Molineux.