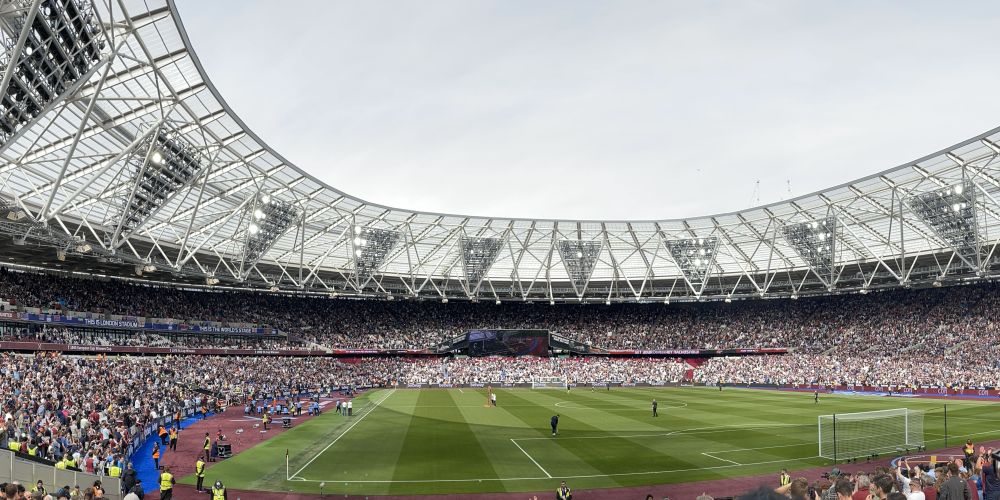 It was another draw, a thirteenth of this Premier League season, and yesterday’s 1-1 scoreline against West Ham at the London Stadium earned us a point in our battle to stay in the Premier League.

Having missed out on the trip to Norwich a week earlier, I was delighted to be back on the road yesterday even if I did have a 5:30 a.m. alarm to get me ready for departure which was going to take us via Worksop to pick up a recently converted Claret.

I don’t think we’d reached the motorway network before the two words Sean and Dyche got a mention and his departure last Friday did dominate the conversation for some time. We tried to make some sense of the events of two days earlier but gave up when nothing made sense so we continued our journey to Epping to complete the journey to the London Stadium on the underground.

The walk up to the stadium is never quite as long as the walk back at the end of the game but as we approached, we received the team news that saw just two changes with Jack Cork and Dwight McNeil coming in for Josh Brownhill and Aaron Lennon, and so we had Michael Jackson’s first team selection, the first Burnley team not selected by Dyche since Terry Pashley named this team at Cardiff in October 2012: Lee Grant, Kieran Trippier, Michael Duff, Jason Shackell, Joseph Mills Brian Stock, Dean Marney, Chris McCann, Martin Paterson, Charlie Austin, Junior Stanislas. Subs: Brian Jensen, Luke O’Neill, David Edgar, Danny Lafferty, Cameron Stewart, Danny Ings, Sam Vokes.

Embed from Getty Images
This was our sixth visit to the London Stadium where we had previously won twice and lost three times. It’s not changed; it still looks impressive but still leaves you wondering who on earth thought it was suitable for football. The one occasion we were allowed in for a win was four years ago when each of our goals in the 3-0 win was greeted with pitch invasions. West Ham look to be in a better place now, semi-finalists in Europe, and again in a decent position in the league.

In weather more suited to this week’s opening of the cricket season, we started brightly enough without really threatening a goal but when West Ham did get going, we were thankful to Nick Pope who made an outstanding save to deny Jarrod Bowen the opening goal. It came following a left wing corner; Bowen’s first effort was blocked but his second was bound for the top corner before Pope somehow got to it and tipped it over the bar as the West Ham players prepared to celebrate.

James Tarkowski then cleared one off the line before the game was interrupted for the sort of reason no one ever wants to see, a serious injury to one of the players. It looked innocuous from our vantage point but it was soon very evident from the reaction of the players from both teams that Ashley Westwood was in some serious trouble. West Ham’s Nikola Vlašić, the player innocently involved in the incident, was distraught and had to be comforted by players of both teams.

The game was held up for around eight minutes before Westy was stretchered off with what has been reported as a serious ankle injury. He left to a standing ovation from every section of the London Stadium as Brownhill came on.

Embed from Getty Images
Almost immediately after the restart, there was another delay for a medical issue in the stand at the far end to us. Thankfully, that was resolved quickly and soon after that, the game took a surprise turn. It was restarted with a Burnley free kick and that eventually led to us winning our first corner which Maxwel Cornet swung in from the right. Jay Rodriguez headed it onto the bar and as it dropped Wout Weghorst headed home.

It certainly settled us and West Ham struggled to get back but as half time, or 45 minutes was approaching, they were given a corner that was so clearly a goal kick. Brownhill hoofed it clear and moved to get the ball back from a West Ham header. This time he played Cornet through. There was no chance of Cornet being offside; he was in his own half. He got in front of Ben Johnson but was brought down by Lukasz Fabiański as he took the ball past him. Paul Tierney gave the first penalty against us since 2019 at Brentford recently; he gave us our first since the home game against West Ham at the end of last season. Just as was the case at Brentford, he decided to keep spectators in the dark by not bothering to point to the spot.

Jay Rod took the ball, as you would expect. He was the only player on the pitch to have taken a penalty for us during a game. He did once miss one for us at Nottingham Forest back in 2012 but apparently his record is 19 scored in 21. Cornet wanted to take it, persuaded Jay to allow that but he failed to even find the target as he rolled the ball wide after a stop/start run up. It’s been reported that it was his first ever club penalty; I’d like to think that it might be his last. I don’t like players taking penalties like this, I reckon Jay would have hammered it home.

It was right at the start of nine additional minutes, it meant we went in for half time with a one goal lead rather than two which might well have been significant at the end of the day.

Embed from Getty Images
West Ham were the more productive for long spells in the second half but we were close to adding a second when Jay fired a shot just wide after good work from Cornet on the left. Poor Cornet, he did some really good things during the game, but he then needlessly gave away the free kick from which we were pegged back. Maybe Weghorst should have done better in dealing with Manuel Lanzini’s free kick but it found Tomáš Souček who got in front of Cork to score with his arm.

There was no sitting back from us. We gave it a go. Matěj Vydra came on to try and change things. We possibly had a couple of half chances but nothing clear and then the game moved to the other end and we had to be so thankful to Pope in the end.

He made another outstanding save to keep out Michael Antonio but before that he saved an Issa Diop header. This one was stunning; one of the best saves I’ve ever seen in a game. It’s looked every bit as good watching it since, as it did live.

After losing the last two away games, this was at least a start as we try to get the points we might need to stay up. Last week, I described our performance at Norwich as inept; yesterday, there was real commitment from every one of our players. That’s the bare minimum we are going to need and if we can do that in the final seven games then who knows?

Embed from Getty Images
The walk back to the underground station was hard work in the heat. With all the diversions, it’s a much longer walk than it is pre-match. But we got there, or should I say, I did, just about, and we were soon back in the car and heading to the same pub we’d visited on the way back from Arsenal in January.

It was another late return, but another good day out. I really do miss it when I’m not there.

Now, a couple of home games before we are back on the road to Watford.

And let’s just hope Westy’s injury is not as bad as we fear.