Ahead of the Aston Villa game three days earlier, Jimmy Adamson had said we’d be well positioned if we won the two home games against them and Preston North End and that’s exactly what we did with the result that we’d now moved into second place in the table. 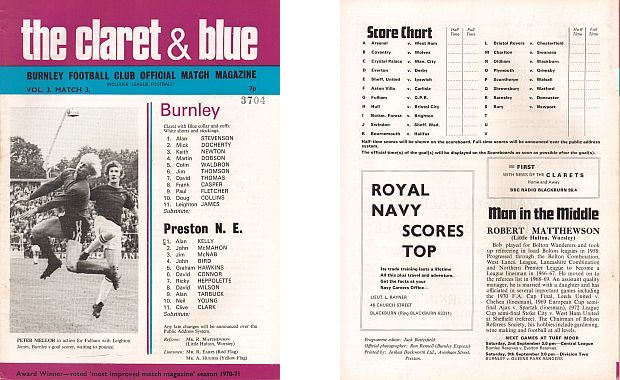 Just as hopes had risen over a settlement in the Lucas Aerospace dispute, things took something of a downturn. The situation was described as near to crisis point as the company laid off 200 women due to lack of deliveries caused by the pickets. Deputy Chief Shop Steward Alan Simpson was stunned: “It was a terrific shock to us all,” he said. “We knew the pickets were stopping lorries, but the decision to lay people off was very sudden.”

Meanwhile, the council warned motorists of chaos ahead, and chaos that could last nine months. The warning came because of plans to put a pedestrian subway under Centenary Way that would link the Locarno on one side to the Safeway block on the other. “It couldn’t be at a worse place for traffic,” said Borough Surveyor Mr E. C. Ashby. “The work will have to be done in two halves, and even this will involve quite a bit of traffic control.” Mr Ashby confirmed that, when complete, access, via steps and ramp on both sides, would be in front of the Locarno and the Alamo Cafe. It was needed, people were risking their lives trying to cross the road. Mr Ashby confirmed the project would go ahead as the work went out to tender.

While on the topic of the council, well done to them for approving an improvements grant for work to be carried on number 71 March Street. It really was an inspirational decision given that the same council committee had already marked the property as scheduled for demolition. They admitted there had been an administrative slip up.

A local taxi driver went to a pick up at the Cabaret Club in Rosegrove. He went in to collect the passenger but came out to find two youths in his cab. In fairness, they did get out when he asked them to but then he gave chase as they dashed off. He caught them but then they caught him, both landing punches and giving him a kicking. It won them an appearance in court where one of them was fined £30 and the other £25. Presumably one of them must have kicked harder than the other. Appearing at the Cabaret Club was Ricky Valance who, in 1960, had success with ‘Tell Laura I Love Her’ which went to number one in the singles charts.

The poor man who had, a couple of weeks earlier, complained that the Studio Cinemas were showing nothing other than sex films meant a regular check for me as to what was on offer. Maybe he was reading too much into the titles because ‘Seven Brides for Seven Brothers’ was showing in this particular week and I’m not sure that was about a group sex session. Over at the Odeon, yes the Odeon was still open, they were going back in time with a re-showing of the second James Bond film ‘From Russia With Love’ with Sean Connery as Bond.

One of the new releases at the cinema was that of Marlon Brando starring in ‘The Godfather’ but you had to travel to Manchester to see that with no Burnley cinema set to show it. And if it was live entertainment you wanted then a trip to Avenham Park in Preston gave you the opportunity to see the forces sweetheart Vera Lynn meet again as part of the Guild Celebrations.

There was good news for Burnley supporters too on top of that win against Villa with the club confirming that a special train would take supporters to Hull for the forthcoming league game, and, if successful, could become a regular feature. The supporters deserved it as Commercial Manager Jack Butterfield explained. “We are organising this trip with confidence because the Burnley fans are so well behaved,” he said. “They have earned their chance because of their record over recent seasons. They must be one of the best behaved crowd of supporters in the country. Even during the relegation season there was no trouble.

“The directors have discussed this venture and are in full support. If this trip is successful we hope it will be the forerunner of many more. We don’t anticipate any trouble and we’re hoping that families will be able to travel at ease on these excursions.” Butterfield added: “We are not setting out to make any money but to provide a service for the fans.” Yes, we all believed that last bit Jack.

Tickets were immediately made available from the development office at Turf Moor priced at £1.25. The train would leave Colne at 10:00 a.m., calling at Brierfield, Burnley Central, Burnley Barracks, Rosegrove and Accrington, arriving in Hull at 12:50 p.m. The return was scheduled for 5:30 p.m. departure, arriving back in the Burnley area around 8:00 p.m. An initial 185 tickets were available but if there was the demand this number could be doubled. “If this scheme works out as well as we hope, Burnley should be able to get a good regular following away from home,” said Butterfield.

But the pressing matter was the first midweek game of the season, and everyone had been boosted by that big win against Villa. By Monday, Jimmy Adamson had named an unchanged team against Alan Ball Senior’s Preston but warned: “Local derbies are always tight. We beat them only 1-0 last year and this time I expect they will come to defend, hoping to steal a point. It will be up to us to overcome this.”

Overcome them we did, and with some ease as our 2-0 win was described as being likely to be our easiest victory all season. It was another very impressive performance from Burnley with the icing on the cake a superb individual goal from Dave Thomas, and the only disappointment was that we didn’t cash in with more goals than the two we got. It would have been more than two but for the brilliance of the 35-year-old Alan Kelly in the Preston goal. He had a superb night and a lesser performance would certainly have seen him beaten more than twice. One save, from Leighton James on the quarter hour, was simply breathtaking as he turned a long range power drive over the bar, but there was nothing he could do ten minutes before half time when Burnley finally took the lead.

The visiting defence was absolutely nowhere as Martin Dobson played in JAMES who coolly slotted the ball past the, for once, helpless Kelly. It was 1-0 at half time and immediately after the restart the game followed the same pattern with Kelly again denying James with a brilliant save. Preston had offered nothing and it really looked as though it just needed a second goal. When it came, ten minutes into the second half, it was a goal worth waiting for.

Frank Casper did really well on the touchline to wriggle past two Preston players, but there seemed little danger to the Preston goal when THOMAS collected it facing a line of defenders across the edge of the penalty box. He went past two before unleashing a vicious swerving drive from around 20-yards that flew into the net. It was a simply outstanding goal from the very much in form Thomas, and surely there would be an avalanche of goals to follow. There were opportunities but none were taken and we had to settle for 2-0 in a game where Preston had rarely threatened.

When all the midweek games had been played, Burnley were second, one of four teams on six points. Nottingham Forest were top, courtesy of a goal average of 3.00, we were second (2.25) with Sheffield Wednesday and Aston Villa below us.

Just below the top four were Portsmouth, with one point less, and they were our next opponents at Fratton Park on a day when attentions were also turning to cricket as Lancashire looked to win the Gillette Cup for a third successive season.

Portsmouth had just been beaten by Huddersfield but in their only other home game had beaten Cardiff. Burnley’s 1971/72 season had ended with a 2-1 win at Fratton Park with Martin Dobson and Jim Thomson getting the goals.