Probert goals win it for Burnley against Palace

Saturday 31 October 1970 found Burnley in a similar position to that in which they now find themselves. Crystal Palace were the visitors to Turf Moor and were riding high in the first division occupying a top four spot . Burnley on the other hand were rock bottom with 4 points from fourteen games and a big zero in the wins column. 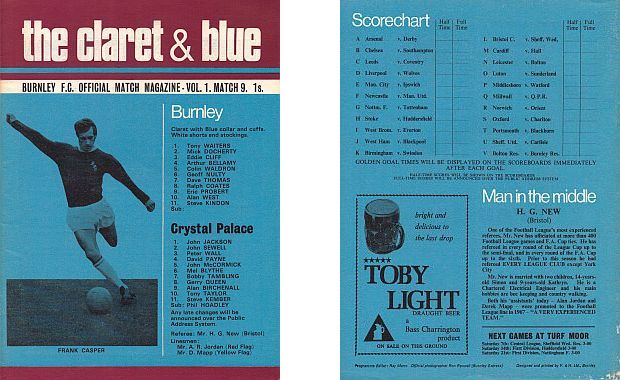 My day started playing rugby in Kendal for the Lakes School, my local comprehensive Kendal the boys Grammar School. We were narrowly beaten by a vastly superior team and after the match I changed out of my school uniform that was required to be worn for school matches and got my mate Dan to take me on his Lambretta Li150 to the Crook interchange of the M6 at midday.

In those days I hitch hiked everywhere and planned to get down to Turf Moor by kick off at 3pm. I had recently moved up to the Lakes from Oxfordshire ahead of the rest of my family who would follow in the New Year so that I could start my A levels at the beginning of the academic year. At the age of 17 having finally moved to within reasonable distance I was planning to see my team at home for the second time in my life . My only previous visit was on 5th September 1964 when I went with my Dad and Grandad  to see Everton literally fight out a one all draw. Otherwise my Burnley games were limited to sporadic away defeats in Birmingham and London.

My first lift took me to Charnock Richard services as the van driver wouldn’t stop at the Samlesbury interchange forcing me to make my way back. I finally talked a lorry driver into dropping me off at 2 o’clock on the hard shoulder and set off on the A59. Slow progress and 3 separate lifts meant I missed the start of the match even though the last kind driver went miles out of his way to drop me off right outside the ground.

The last time I had visited the Turf I stood at the front of the Brunshaw Road enclosure on my wooden stool and was mesmerised by the sight of the Longside and Beehole End, I was determined to watch from there this time. I entered the Longside from the corner by the Cricket field and although the crowd was only 12,870 I was captivated. A Bovril and a meat and potato pie revived me for the gut wrenching game that followed.

The Match Day Magazine cost one shilling and had my favourite, Frank Casper on the cover but much to my disappointment he wasn’t in the team that day and only played sporadically for the remainder of that season. His place as the number nine was taken by Eric Probert one of the players heralded by Keith McNee in his piece about Eddie Cliff becoming the ninth member of the Burnley FA Youth Cup winning team of 1968 to appear in the topflight for the Clarets ( Thomas, Kindon, Docherty, Probert, West, Wrigley, Cliff, Peter Jones and Willie Brown). McNee stated that he doubted that any club in any division could match that sort of youth experience. He noted that so far it hadn’t brought in the points but that surely it would do so before long! No doubt Cliff was chosen following his hattrick scored against Leeds in the Central League fixture two weeks previously. He made his debut at Southampton the week prior to the Palace game and apparently fared well against England International winger Terry Paine. 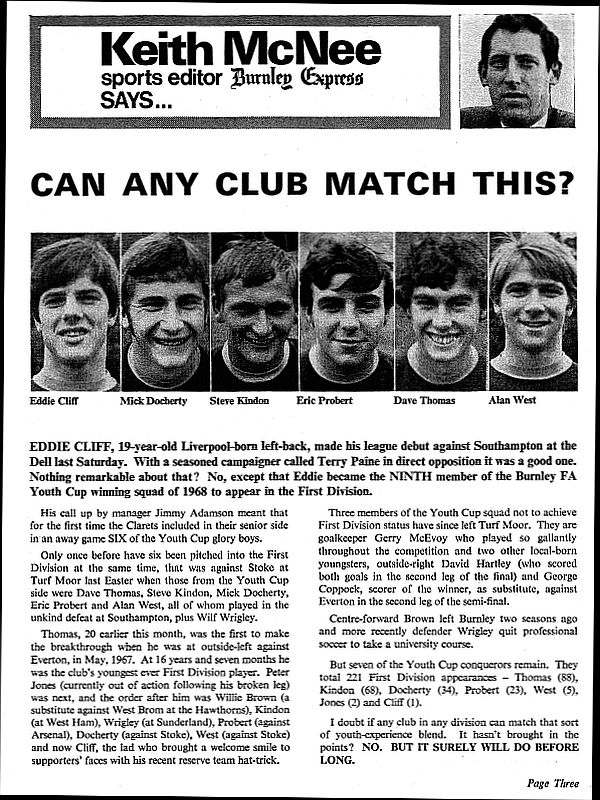 The weather was cold, wet and misty and the pitch was like the proverbial ploughed field but I will never forget my unwanted centre forward, little Eric Probert sprinting through the middle of the Palace defence to put us in the lead and then getting a second to give us our first win of the season at the fifteenth time of asking. Tony Waiters who sadly passed away this week was in goal and performed well but a 2-1 lead meant plenty of anxiety. There was a  promise of better things around the corner.

I walked home through the streets of Burnley as the football traffic died away rapidly without a hint of a lift. Approaching Padiham I stopped in the George IV in and had a pint of Thwaites, a pale yellow bitter with a taste quite different from the Youngers Tartan Bitter I was used to.

I visited the Turf four times that season sometimes getting home around midnight. The season eventually ended in relegation but the stay in the second division was short and ended gloriously two years later in 1972 by which time I was at university in London.

I have never forgotten that dank misty day at Turf Moor and the elation that came with the victory. My devotion to a small, unpopular club that started in 1960 was cemented even more firmly and remains as tightly bound to me now as ever. Hopefully Monday’s fixture will give us all a glimpse of a brighter future.