Goalkeeper Adam Legzdins left the Clarets last summer after three years at Turf Moor during which he didn’t make any first team appearances. 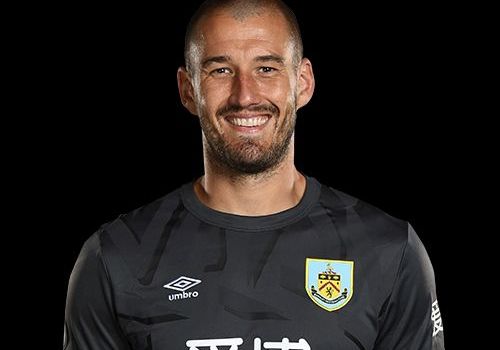 He opted to move north of the border and in his first season in Scotland enjoyed a promotion with his new club Dundee who will now return to the Premiership for the 2021/22 season. He didn’t win a regular place in the team until March but was then an ever present through the remainder of the season and into the four play-off games when they beat Raith and then Kilmarnock whose place they have taken in the top flight.

It’s earned Legzdins, now 34, a new two year deal and speaking to the Dundee Courier he said: “I am enjoying playing football with a really good team. There is a great management set up at Dundee and good people at the club. Things have fallen into place as I hoped they would.”

Legzdins has played for a number of clubs and therefore several managers in his career but he said that Sean Dyche had probably made the biggest impression on him. Admitting to still calling him ‘gaffer’ he says the ‘long ball’ accusations are well wide of the mark and that the Burnley boss deserves enormous credit for his achievements in keeping Burnley in the Premier League.

“Sean Dyche at Burnley has done a fantastic job and I have a lot of respect for him and his staff,” Legzdins said. “I went there at the age of 30 and probably learned more in three years than I have anywhere else. He was so meticulous and everything was well thought out. I really can’t speak highly enough of what he had his staff have done there.

“The gaffer loves a good laugh and one of his greatest strengths is that he has gathered a set of characters at Burnley where everyone holds each other to account. One of the gaffer’s saying is leave your ego at the door and everyone pulls together whether they are a masseur, a player, whoever it may be, there is no bullshit is what he says.

“You are competing against teams with much bigger budgets and bigger playing pools but it is such a clever way they have done it, they really don’t get the credit they deserve.”