John Francis won star billing for the Clarets, but it was an overall superb team performance that saw off an in form Northampton Town at Turf Moor to enhance our chances of promotion from the Fourth Division even further. 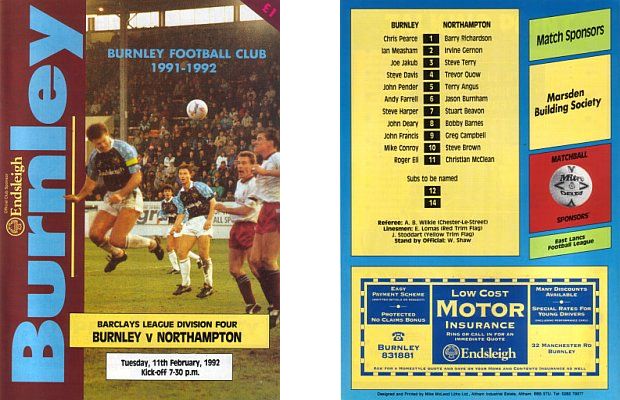 The week ahead of the game brought news of one Burnley couple who had found themselves an answer to their mortgage problems. It wasn’t a solution that should have been recommended, however, as they stole from a safe at a petrol station in Eastern Avenue.

The woman involved, an 18-year-old, was a cashier at the station and she made a drawing of the key and then had one cut. Her boyfriend then went in after it had closed and took cash and cheques worth £9,468. Police enquiries led to the woman confessing it all. Both pleaded guilty and they both received 180 hours community service and were forced to pay £500 restitution.

The Holbeck Street shootings case continued and the man charged with attempted murder during the racial violence told the court: “I didn’t fire the shots.” He didn’t know who had fired them but believed it to be one of the youths seen running away.

The judge, Mr Justice Leonard, told the jury not to return verdicts on charges the man faced involving two other Asians. He said: “Whoever fired the shot was aiming at Mr Bashir and happened in the process to hit two others.”

I wonder just who believes some of the stories told in court sometimes. One 23-year-old appeared after breaking into houses in Melville Street and Ferndale Street as well as taking a Ford Escort car. Police followed him so he got out of the car and made a run for it, but was found hiding in undergrowth by the banks of the River Brun. In court he revealed he’d been helping his girlfriend look after their two-year-old son before finding out the child wasn’t his. That led to these crimes. He was sentenced to twelve months for each burglary and six months for the car theft, all to run concurrently.

There was a big fight going on between the council and Mr Paul Dew who had bought the old Aenon Chapel on Red Lion Street across from the bus station. He’d beaten the council to the purchase after they’d wanted to make use of it as an extension to the library. It appeared they were ready to block just about every move Mr Dew made and it was the final straw for him when he was told to take his signage down. He promptly retaliated by having the library building listed, thus preventing the planned changes, including a disabled ramp, from being made.

There was some good news for local wrought ironsmith Brian Rourke when news came through that Mick Jagger had got his hands on his candelabra. What had happened was that Mick and Jerry Hall had bought them for £350 from a shop in the Cotswolds and the shop owner couldn’t wait to send the news on. I’m sure Mick, and Jerry for that matter, got a lot of Satisfaction from their purchase. He probably had Mixed Emotions at the price, at least until their relationship was All Over Now.

There were two big football matches in town. Ahead of Burnley’s home game against Northampton, the local CID beat a team of local solicitors 2-0. It was said the solicitors had no defence.

As for Burnley; this was a tough game against a Northampton side who hadn’t been beaten in the league since our 2-1 win down at the County Ground in November. That day, when Andy Marriott played his last game for Burnley, two Mike Conroy goals gave us the win. This time, they came to Turf Moor with one intention; to keep things tight and if possible to go home with a 0-0 draw. It was blanket defence stuff from the visitors but once Burnley broke the deadlock ten minutes before half time they had no answer to the rampant Clarets who went on to turn in the best home performance of the season.

That opening goal was a real goal of the season contender. A long clearance was headed on by Joe Jakub and then brilliant flicks by first Roger Eli and then John Francis allowed John Deary to go clear in the inside-left channel. One on one with the goalkeeper, he was so reliable that you could put Jimmy Mullen’s house on him scoring. DEARY made absolutely no mistake, sliding the ball under Northampton goalkeeper Barry Richardson.

It was 1-0 at half time but things just got better and better after the break. Just five minutes in and Andy Farrell found Francis, who had as good a game as he’d ever had for the Clarets. He played the ball inside the left back for Roger ELI to run on to.  He’d got the pace, he’d got the finish, and he got the goal 2-0.

Northampton really had no answer now and when Steve Davis hit a long clearance out of defence they were in trouble again. It was latched onto by Conroy on the chase. He had the pace to outdo Trevor Quow Did he have the finish? Oh, yes he had. Confidence was oozing from Mike CONROY. That was 3-0 and Burnley were far from finished. Jakub took a quick throw on the left to Francis. His lovely cross was inviting in HARPER who headed home. It was exhibition stuff now.

It just needed the finishing touches. Burnley now well on top It and after recovering the ball it ended with Francis and Conroy linking up for FRANCIS to hit a screamer home. It was a wonderful goal, 5-0, five different scorers and each goal exhibiting a different quality. This is what makes managers smile. A one-two as good as that and a finish as good as that.

We’d turned in a superb display. Northampton were shell shocked and Burnley were moving ever closer to a promotion. The league table still showed us five points clear at the top of the league but now eight points clear of the top play off position.

Jimmy Mullen was beaming at the end and he just had to talk about Francis. He said: “John proved tonight what we all knew him to be capable of. Sometimes he needs too many touches, but his control of the ball tonight was perfect. his first time passes were spot on.

“He was brilliant and the goal he scored would have won any game. Having said that, you will go a long way to see five goals as good as that in any one game. Everyone knows we can score but who would have thought that we could have done it in such devastating style.?”

Mullen was also delighted with the performance of his goalkeeper Chris Pearce who made a vital save at 0-0. “The save Chris made tonight was as good as anything I have seen from a goalkeeper since Gordon Banks saved from Pele in the Mexico World Cup. It was outstanding and came at a very crucial point in the game,” he said.

The good news for the Clarets came with Barnet’s defeat at Chesterfield and Mansfield Town only drawing at Walsall.

The only one of the three teams right below us to win was Blackpool. They won 2-1 at Halifax Town with goals from Dave Bamber and Tony Rodwell.

It was Scunthorpe next for Burnley. This was a difficult game against the team in seventh place. They’d lost only once at home all season, that a 4-1 hammering to Mansfield in October.