“The trouble is, you just can’t realise we’re the Champions,” said one Burnley player about two hours after the final whistle at Maine Road, Manchester had confirmed a 2-1 win over Manchester City and given the Turf Moor team the two points necessary for the League championship. 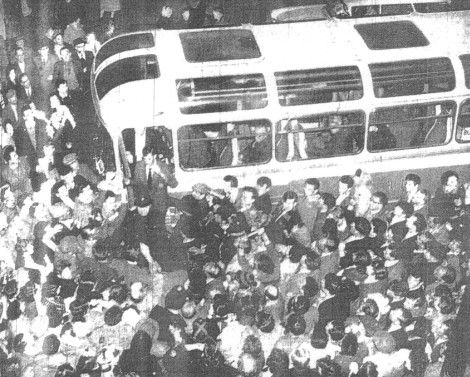 Hundreds of the thousands of supporters from East Lancashire who attended the match either joined in mobbing the team as they came off the field or waited for them outside Maine Road or the Burnley Town Hall. After the match a big crowd waited outside the dressing room entrance and main doorway for the team who, on being joined by Mr Potts, were invited into the main reception-room by the City directors.

During the return journey supporters in cars and coaches showed their delight by waving berets and scarves and sounding of rattles. However, it was not until they reached Rawtenstall that the team began to realise that various ‘reception committees’ were awaiting them. The players had been passing the time singing numbers from the districts from which they came amid all-round applause. Now they found that they were passing groups of cheering people every few hundred yards, with the largest crowd being at Rawtenstall centre.

The coach had a police motor cycle escort to the Burnley borough boundary where a patrol car took over. It was at the Summit that the first shock of the surprise welcome ‘hit’ the party. Mr Lord called the attention of the team to the sight ahead and Mr Potts asked them to open the coach windows to show their appreciation. As far as could be seen, the descent to the town was past a stationary line of cars with lights shining and drawn into the near side so that the coach could pass. People were standing four deep on the pavement and as soon as the team appeared, the car klaxons were sounded and it was cheers all the way.

There was another surprise as soon as the Manchester Road bend by Springhill Road was turned. “Look at this,” called one of the party – and ‘this’ was a tremendous crowd and a tumultuous welcome. 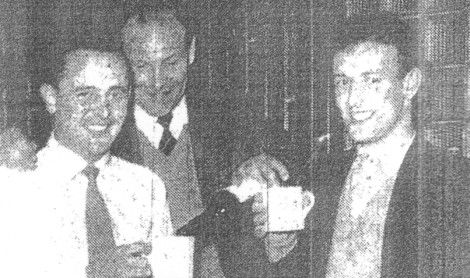 As soon as the escort car came to a halt, the supporters swarmed in between it and the coach cheering wildly. The Mayor (Councillor Miss Edith Utley) was on the steps of the Town Hall, so the captain Jimmy Adamson, followed by Tommy Cummings, Mr R. W. Lord and Mr R. Cook, emerged from the coach to join her. The mayor motioned for the remainder of the party to leave the coach, and each member had to run the gauntlet of a police cleared pathway of back-slapping enthusiasts, Ray Bennion and Billy Dougall being surrounded and unable to join the others for some minutes.

The crowd chanted, “We want Mac! We want Mac!” in a continuous roar, but Jimmy McIlroy had left the party near his home off Manchester Road. Jimmy Adamson quietened the cheering throng and thanked them for their warm and unexpected reception. The party were then invited into the Mayor’s Parlour where Councillor H. Woodcock (chairman) and members of Brierfield UDC were waiting. “We were having a meeting,” Councillor Woodcock said, “Then when we heard the score we decided that the least we could do was to get to Burnley and offer our congratulations. After all, two of the team, John Angus and Jimmy Robson, are in lodgings at Brierfield and we all are very proud of them.”

The Mayor was delighted with the result and insisted that the players go out on the balcony to the crowd. Adam Blacklaw was one of the first to be called upon by the supporters and then Tommy Cummings sought out the youngsters of the team, who were too embarrassed by the enthusiasm, and if they had not had a ‘public appearance’ they were seized and hustled to the forefront where they were laughingly introduced by Mr Lord. And the crowd loved it. Their cheers could be heard distinctly as far away as the Prairie field.

Mr Harry Potts, giving them a vote of thanks, said that it was all very well supporting a consistently winning team. It was when things did not go right that proved a test of loyalty and he felt that the Turf Moor crowd had been behind them. Their loyalty had come to the rescue. 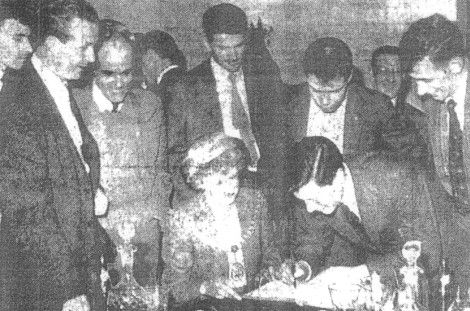 Actually, Jimmy McIlroy arrived at the Town Hall when most of the crowd had gone and just before the party moved off to Turf Moor. Word had been received that another reception was waiting the team at the club headquarters, late as it was, but many had departed when the team appeared.

After the match was over earlier in the evening, and Burnley’s triumph was assured, reactions of members of the team suffered from demonstrations of delight to stunned disbelief. Jimmy Adamson, the skipper, said, “As soon as the final whistle sounded I let my emotions get the better of me for the first time on a football field. I thought, this is it, and threw my arms round someone – either Tommy Cummings or Dusty Miller.”

Later he said, “It is the happiest moment of my football life. I feel very grateful to the boys for playing so well and making our delight possible. It is something we share and will never forget. We owe this success to our manager. He is a wonderful fellow and has worked so hard for our benefit.”

Tommy Cummings, one of the senior members of the side, said, “This is a happy club, and I think that has a great deal to do with it. I think it is fair to say that we all feel pleased because of our manager. Mr Potts is a grand fellow, and it is his triumph rather than ours.”

Mr Billy Dougall, the physiotherapist and former trainer, coach and manager, commented, “It was the best thing that happened to Burnley FC when Harry Potts came to Turf Moor.”