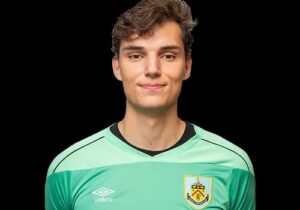 Goalkeeper Marc Richter has left Burnley after ten months at Turf Moor to return to Germany with Würzburger Kickers who have recently been relegated from Bundesliga 2 into the third tier of German football.

Richter was one of four new under-23 players who arrived in August last year and was the only one of the four who was offered a new deal last month when the academy retained list was announced.

He came to Burnley having been recommended by goalkeeping coach Fabian Otte who himself recently returned home to Germany and Richter now follows having played a number of under-23 games for us last season, becoming the regular first choice in the second half of the season after Lucas Jensen moved on loan to Bolton.

Burnley have received an undisclosed fee from the Bavarian club for the 21-year-old.

« Collins is a Claret
Olympic call up for Wood »