Burnley have today added to the squad with the capture of Southampton midfielder Nathan Tella on a season long loan and becomes the first player to move from Southampton to Burnley since Nathan Dyer joined us on loan in 2005.

He’s been with Southampton since the summer of 2017 having been released by Arsenal and the 23-year-old has gone on to make over forty league and cup appearances for them. 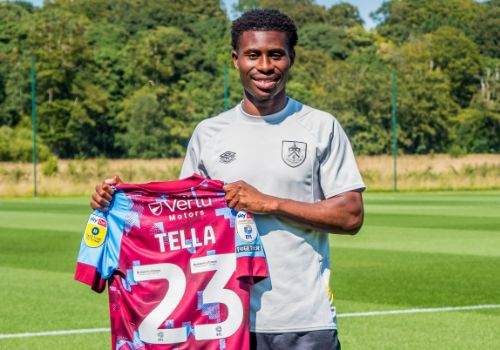 His debut came during Project Restart in June 2020 when he came on as a late substitute for former Claret Danny Ings in a 3-0 win at Norwich and after a number of substitute appearances, he got his first Premier League start in February last year when he lined up against Leeds at Elland Road, a game Southampton lost 3-0.

He’s made just one brief appearance against Burnley previously. In Southampton’s 1-0 win at the Turf in our first home game of the 2020/21 season, he came on as a substitute, again for Ings, with just under a quarter of an hour remaining.

Last season, he made fourteen appearances in the Premier League, ten of them starts; his most recent game was in their 2-1 home defeat against Liverpool last May and his one goal in the league for Saints was against Fulham in May 2021; he scored their second goal in a 4-1 win.

Tella earned himself a new deal at Southampton back in January which has committed him to the club until the end of the 2024/25 season. At the time, he said: “I’m an attacker, so I’m always going to be judged on my goal contributions, whether it’s goals or assists. I think they’re important to all attackers, you want to score, you want to assist, you want the team to win. His manager Ralph Hasenhūttl said: “Nathan is a good example of a young player with a lot of potential who is willing to learn and to push himself. These are the sort of players we like to develop at Southampton. He has played some excellent games already and made some good improvements in his time working with us. I think he can develop a lot more here, so it is good that he can focus on improving his qualities with us even more over the coming seasons.”

Southampton want him to get more first team experience and have trusted us to do that during this season. Born and brought up in London, he’s of Nigerian descent, and he now heads north to join Vincent Kompany’s Clarets.

On completing his move to Burnley, Tella said: “Once the opportunity arose for me to come here, this is where my head has been at since. I’ve been wanting to play football consistently for a while now and now the opportunity has come up here, it’s one I’m just happy to have.”

Vincent Kompany added: “We’re pleased to add Nathan to our team. He’s a hard working player, who carries a great threat going forward with his attacking pace. I have no doubt that Nathan will fit in fine here and help improve our squad. We would like to thank Southampton Football Club for making this possible and we look forward to working with him.”