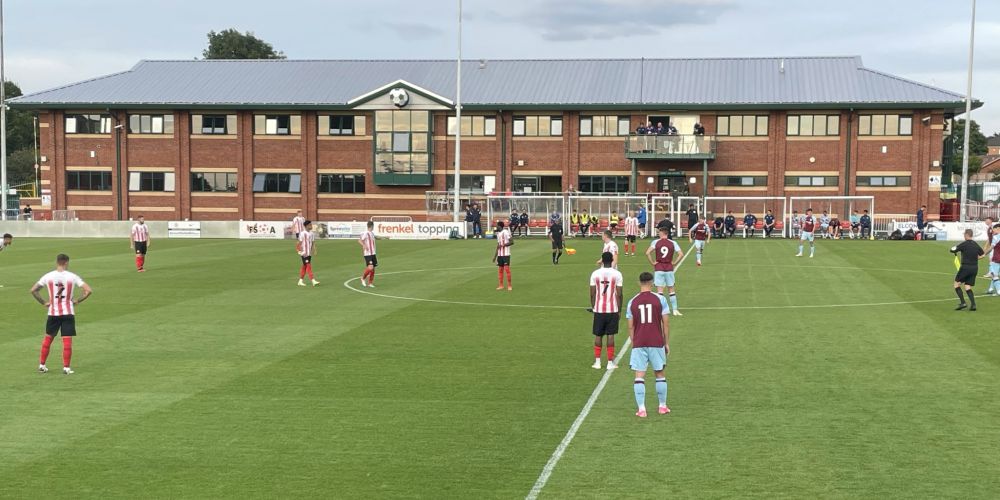 A week ago, we started the season with a 3-2 defeat at West Brom and we repeated that scoreline tonight at home against Sunderland although the two games couldn’t have been more different.

Last week, only two stoppage time goals prevented us from losing the game 3-0 but at Leyland tonight we were 2-0 up at half time and appeared to be coasting to victory until former Burnley player Vinnie Steels decided to have his say.

I have to say it was good to be back watching games at this level on what was my first visit to the County Ground at Leyland to see us play a home game; previous visits have been for away fixtures against Bolton and the Lancashire Senior Cup final.

It was, to some extent, like watching a new team. Five of our starting eleven I’d never seen play before and many of the others have just been occasionally for games in the youth team, the exceptions being Max Thompson and Rob Harker who both made their mark on the first half.

For Harker it was for the wrong reasons. He went down having played the ball out on the right hand side and was eventually replaced as he limped towards the dug out. It was difficult to see what had happened from the far side, but he could be seen on crutches at the end of the game.

The score was still 0-0 at the time but just a few minutes later we grabbed the lead following a free kick on the right hand side, taken by Owen Dodgson. Thompson turned it back in across the six-yard box for Richard Nartey (pictured) to score from close range.

We should really have been further in front as half time approached but we did finally get our second in stoppage time. Thompson, who had seen one effort superbly saved, was brought down by Sunderland’s trialist goalkeeper and he made no mistake from the resulting penalty.

I don’t think anyone watching the game would have predicted anything but a Burnley win as the players made their way off the pitch but Steels, who left Burnley in January of last year before signing for Sunderland in the summer, had other ideas.

The second half was delayed. The two teams were lined up for the restart but bizarrely the referee and his two assistants were nowhere to be seen. It was a few minutes before they finally appeared and we were able to get underway.

Before we’d settled, Steels volleyed home from ten yards to bring Sunderland within one goal but we could so easily have restored our two goal advantage only for Jake Rooney’s header to come back off the bar with the second effort cleared. Steels then got onto a pass from Benji Kimpioka to fire home and suddenly it was very much game on.

We probably had the lion’s share of the play after that. We did have chances, but it was Sam Wilding who won it for Sunderland when he headed home a corner, and deservedly so and they probably deserved their moment of good fortune right at the end when Finlay Armstrong’s shot hit the outside of the post.