Seventh heaven on the road 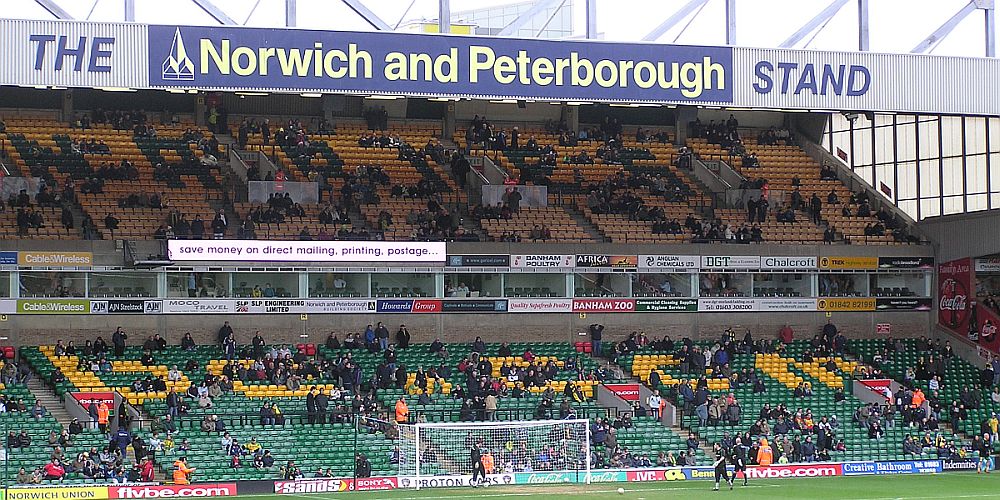 Our final away game of the 2019/20 season ended in a 2-0 win yesterday against already relegated Norwich City at Carrow Road, a seventh away win of the season and a result which has guaranteed us a top half finish in the Premier League for a second time.

It was a bit of a strange game, bizarre was the word Sean Dyche used, in which Norwich had two players sent off before we took the lead right on half time and then, in the second half, they presented us with an own goal to confirm the win some ten minutes from the end.

As it’s been since the restart the game was played in a virtually empty stadium. We didn’t even see any sign of home or away directors on the television coverage although I did hear that a 79-year-old former TV cook was seen outside trying to gather support for the home club. “Where are you?” she screamed. “Where are you? Let’s be havin’ you.”

It hasn’t been a team selection choice for Sean Dyche recently, more about counting who he has fit and available to play. We did get a shock when the team was announced and Ben Mee was back in the line up although that proved not to be the case. The only change, as we expected, was Jόhann Berg Guðmundsson coming in for his first Premier League start since October on the right of the midfield with Erik Pieters moving to his more familiar left back role, replacing the injured Charlie Taylor.

The young lads on the bench were this time joined, for the first time, by under-23 striker Joel Mumbongo who sat alongside Jimmy Dunne, Anthony Glennon, Mace Goodridge and Josh Benson. The only Burnley first team experience on the bench was provided by Robbie Brady and Matěj Vydra. 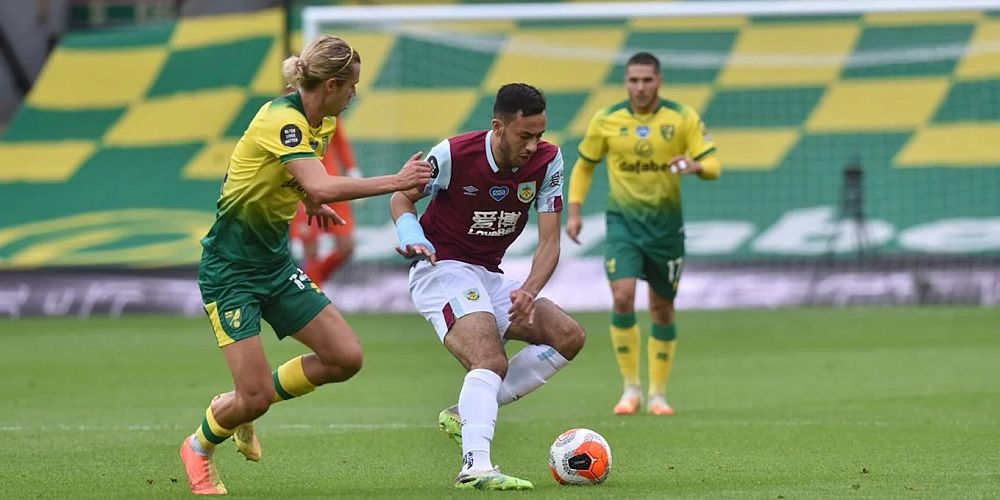 I wasn’t sure what to expect from this game. Quite often, once a team has been relegated they play with more freedom and often get results you wouldn’t expect. Norwich were relegated a week earlier and were unfortunate in midweek in losing 1-0 at Chelsea.

Although they never looked likely to cause us too much damage, they did start the better of the two sides and we quickly learned about just how good Nick Pope is. In the opening minutes of the game, Sky co-commentator Efan Ekoku claimed he was good between the sheets, although he did quickly correct that, and then he made one very good save on his life to push a ball away with James Tarkowski deflecting the rebound wide of goal for a corner.

In truth, that one incident apart, I didn’t think we were ever in much trouble but likewise we weren’t offering too much going forward either. There has perhaps been a bit of sharpness missing in the last two games but that’s hardly a surprise given how much these players have put in recently.

Things changed in our favour around ten minutes before half time after what looked like a tussle between Ashley Westwood and Norwich midfielder Emiliano Buendía who, incidentally, scored in their 2-1 defeat at Watford eleven days earlier, their only goal since February.

Referee Kevin Friend saw something but initially tried to play an advantage before blowing to confirm a free kick to us. We were told VAR were taking a look and, once the incident was shown again it was no surprise. We, sat watching on TV thought it had to be a red but, then again, it was lee Mason at Stockley Park. For a first time in a Burnley game, Mason’s advice was for Friend to take another look on the monitor. It took him very little time before he showed his red card to Buendía and Norwich were down to ten men. 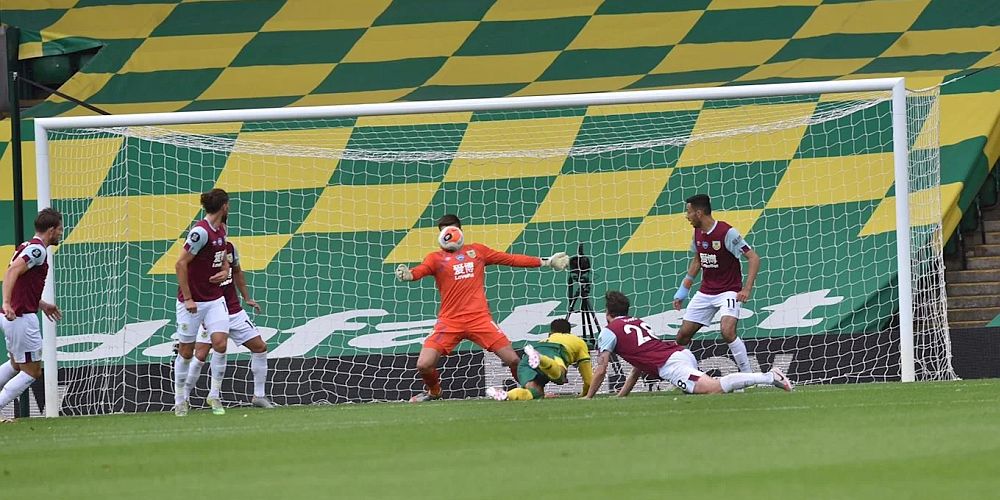 Jay Rodriguez almost immediately tested home goalkeeper Tim Krul who did well to save down to his right. By this time, any threat from Norwich had all but disappeared, even before the red card, and now we were very much in the ascendancy.

When the board went up for the extra minutes at the end of the half, it was still 10 v 11 and the game was still 0-0. That was to change dramatically in stoppage time. Almost immediately Friend was showing his red card again, this time to Josip Drmić. There could be no dispute on this one either. The Norwich forward’s foot was high, he was, in referee speak, out of control and although the contact with Pieters could have been worse there was no real option but to send him off.

The incident had happened just in front of the Norwich dug out on our left. Dwight McNeil took the free kick which Alex Tettey failed to deal with very well. It dropped for James Tarkowski who played a short ball to Guðmundsson. His cross from the right was met by Chris Wood with his now, new, trademark attempt at an overhead kick. Against Wolves it led to us getting a penalty, this time he made contact and in it went, just inside the post and gave us a half time lead that we never, ever looked likely to lose.

In normal football speak, a goal up at half time against nine men should probably leave you fairly confident of a win but I’ve seen us play against nine men far too often to be too over confident. I’ve, off the top of my head, seen all of Sunderland, Rochdale and Crystal Palace beat us on the Turf with nine men. I saw Palace hold out at Selhurst Park for a 0-0 draw and then there was the game at Brighton eight seasons ago when only a Kieran Trippier worldy prevented a potential embarrassment.

Norwich came out with what was a 4-4-0 formation and basically challenged us to get through them. In fairness they did well, none more so than their two central defenders Christoph Zimmermann, on as a half time substitute, and Ben Godfrey, but they were thankful to their man of the match, goalkeeper Krul, who made a number of saves to keep the score at 1-0. 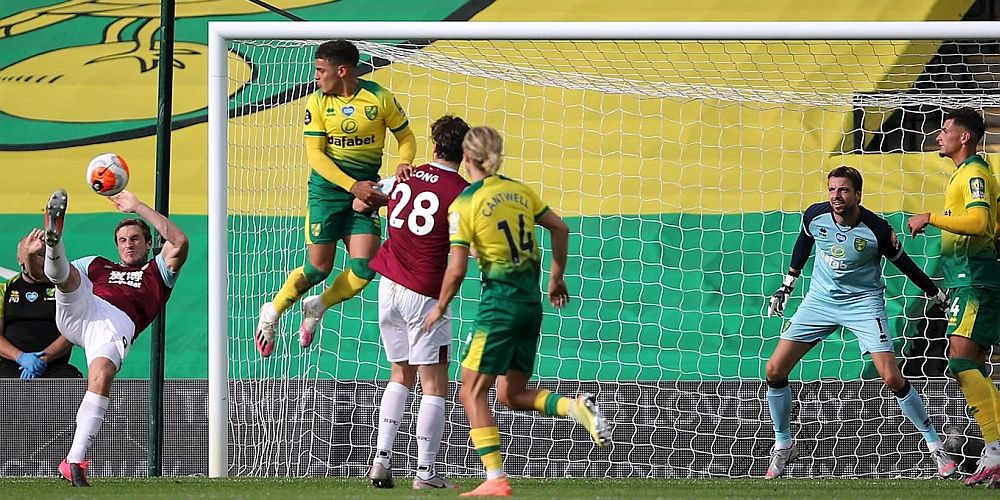 Dyche gave half an hour to former Norwich player Robbie Brady and closer to the end we saw Vydra come on and he gave us a nice little cameo. Just after that second and last substitution, the result was confirmed when Godfrey, trying to bring the ball under control from a Pieters cross, turned it into his own net.

Krul made another couple of saves but then Norwich had their one effort at goal when Onel Hernández got in a shot that was deflected by Phil Bardsley only for Pope to make a spectacular save to keep him in front in the chase for the golden glove. We might have learned this weekend that Pope is the worst dressed player in the dressing room but good between the sheets but what we have learned over time is just how good a goalkeeper he is. England’s number one? For me, absolutely he is.

That was it, another away win. That’s seven this season, equalling the number we won on the road two seasons ago. At the end of last season, leaving Goodison Park after our 2-0 defeat against Everton in the last away fixture, we chatted about our away form. We’d won four and drawn five in 2018/19 and we thought that was a good return. To now add another three wins is particularly special.

It was a day of records, so let’s have a look at some of them.

Nick Pope: 15 clean sheets, best in the top flight since we kept 16 clean sheets when the brilliant Colin McDonald was first choice goalkeeper in 1954/55 season.

Chris Wood: 13 goals, first to score that many in a top flight season since both Ray Hankin and Peter Noble both scored 13 goals in the 1975/76 season.

Team: 54 points, equalling our points tally in the Premier League of two seasons ago.

Burnley: yesterday’s win took our points total in the Premier League to 251.

What we’ve also done is guarantee ourselves a top half place in the Premier League. I wonder just how many Burnley fans would have thought that would happen when we left Chelsea in mid-January even though we were only four points adrift of Arsenal who were then tenth.

We could still finish sixth in the table but that would take a freak set of results and I doubt, even with a win next week, that we’ll get into the top seven to qualify for a place in Europe, and even that could be scuppered if Arsenal win the FA Cup.

Let’s hope we can go out with another good result next week to end what has been a very strange but ultimately rewarding season.

Other than five games in the 1950s, It’s the first time I’ve missed being at Carrow Road for a game against Norwich, except for the Texaco Cup game in 1973. I would have loved to have been there but I do have to say I didn’t miss that damned long journey home.